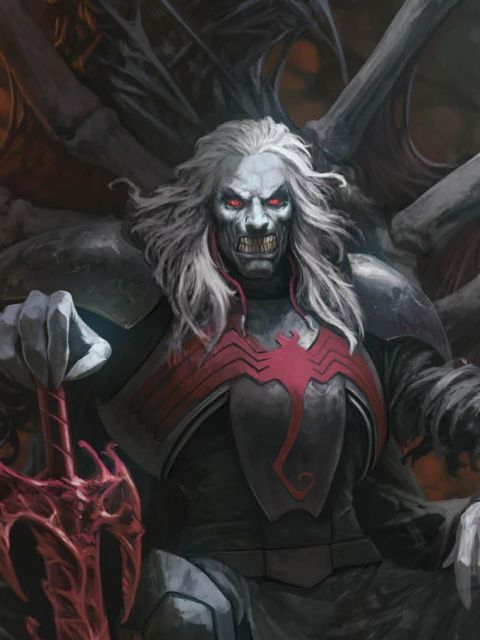 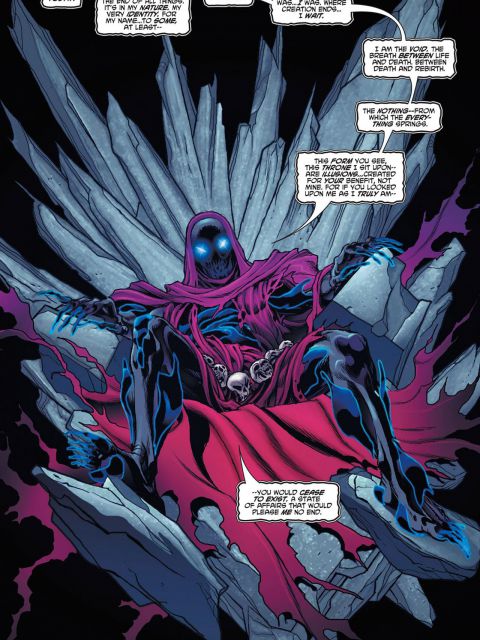 41
Knull Which part of knull rules over the void/abyss which is true form oblivion/oblivion don’t u understand? Erase anyone from existence? Lmfao are u claiming oblivion could erase ppl like toaa, Toba, Hoi tiers from existence or are u just a oblivion wanker/goon who doesn’t read comics?

1.4K
Multi-Oblivion ADVERTISEMENT
History
Oblivion is a cosmic entity embodying the primordial void that existed before the creation of the universe. Despite predating the Multiverse itself,[5] it sees its fellow cosmic entities Eternity, Infinity and Death - who came into being when the universe was created - as siblings. Another being, known as Galactus, was born later, from the ashes of the previous universe and is also seen as a sibling by these beings. Oblivion has a very close relationship with Death and the two may be different aspects of the same being, just as Infinity and Eternity are. Just like Eternity and Death have a strong rivalry, Oblivion has a strong rivalry with Infinity, a rivalry usually fought through avatars. Oblivion usually resides inside a pocket dimension, known as the Outer Void.[6]

One of Oblivion's principal avatars was the Chaos King, who originated from the primordial Void before the universe began, but was weakened and integrated into the Amatsu-Kami, becoming known as Amatsu-Mikaboshi,[7][4]

The dark elder god Knull also originated within the primordial Abyss, though while he claimed to be the Void incarnate and could manipulate its essence to create monsters,[8] Jean Grey determined that he was not a manifestation of the abyss but a god who possessed dominion over it.[1][9] Knull created the symbiotes and other eldritch monsters from living darkness and waged war against the universe to return it to the Void

Now don't think badly of me: I can't help but wish for the end of all things. It's in my nature, my very identity, for my name...to some, at least -- is Oblivion. Before creation was... I was. Where creation ends... I wait. I am the void. The breath between life and death. Between death and rebirth. The nothing -- from which the everything springs. Quote2.png
—Oblivion

Oblivion is a cosmic abstract entity and another aspect of Death, a personification of death. Oblivion predates the Multiverse,[5] and represents non-existence and is a counter-force to the expanding universe

41
Knull Jeans statement is later contradicted by king in black issue 5 and venom 2021. Bc u just said oblivion is the embodiment of this primordial void yet in king in black issue 5 venom when speaking to knull tells knull ‘we may all be engulfed by the void, doomed to drown in YOUR kingdom in black’ which 1 contradicts jeans statement and ur theory of knull being an aspect of the void because an aspect of the void cannot rule over the void itself. This further proves that knull’s claim is correct and Jean is wrong
2)in venom 2021 it once again states knull the previous (since Eddie supposedly killed him) god of the void, lord of the darkness from before the universe began . Universe in this context would mean pre creation meaning universe would mean the multiverse. This statement once again contradicts jeans statement as knull is actually the supreme ruler of the darkness whilst oblivion isn’t

1.4K
Multi-Oblivion Before the multiverse was... I was. At the end of all things... I wait. I am the void... The breath between life and death... Between death and rebirth. Between heaven and hell. My true form is beyond that which you see. I transcend form -- and shape and substance. This body... This realm... And everyone and everything IN it... Are my Creations.'Return now to non-being... Feel the consciousness draining from you. Fell all that you are stripped away... Consumed. You are beyond loneliness. Beyond pain. Beyond even the memory of what you once were. Oblivion is all that -- and more. For unlike you... I have consciousness of what I am. I feel every ripple in the sea of eternal emptiness... Every ebb in the tide of eternal nihility. Death has his joys... As do Love, Eternity and the countless other cosmic deities who play their parts in the Divine Drama... But Oblivion... Has nothing.

Oblivion: And everyone and everything IN it... Are my Creations. that's including Knull because Knull born in the abyss or Void or darkness, again Knull even not the darkness or Void itself, you really make me laughs 🤣🤣🤣🤣

Knull actually exist in body or realm of creation of Oblivion, he clearly like Chaos King only an avatar of Oblivion but more weaker than Chaos King😂😂😂

Oblivion would destroys Knull like an insect 🤣🤣🤣
Last edited: 10 mo 10 d ago.

Jean grey even said the darkness existed long before him (Knull)😂😂😂

1.4K
Multi-Oblivion Read this answer even other answer for how powerful Oblivion https://www.quora.com/How-powerful-is-Marvels-Oblivion/answer/Simone-Campagna-2?ch=15&oid=276496493&share=f32cf218&srid=midhx&target_type=answer

41
Knull Like I said jeans statement is contradicted and you still haven’t given any refutation. Plus oblivion’s true form is the void he doesn’t transcend the void

1.4K
Multi-Oblivion I already give you any refutation🤣🤣🤣

Knull even not close with Chaos King and Chaos King only an aspect of Oblivion.

1.4K
Multi-Oblivion Oblivion described as being a void of pure nothingness that exists outside and beyond the multiverse, devoid of form, shape, space and time. All of creation is an illusion from his perspective, and all its beings, both mortal and cosmic are merely phantoms. Creation itself, alongside all the entities that compose it inevitably return to the nothingness that he embodies, only to eventually be birthed anew in a neverending cycle.

Oblivion is the void, the darkness, or the nothingness itself not Knull. Knull even only a god or an elder god that is nothing if compared with Oblivion 😂😂😂

Also read about Knull relatives: it even says: Oblivion (true self), that means Knull is just an avatar of Oblivion
Last edited: 10 mo 9 d ago.