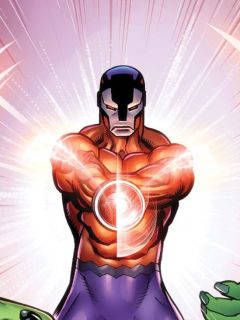 Ulysses Klaw was a physicist working in the field of applied sonics at the Technical University at Delft, who had designed a sound transducer able to convert sound waves into physical mass. The theoretical element necessary to make his device work was Vibranium, a substance known to exist only in certain meteoric deposits in the small African nation of Wakanda. Desperate for a sample, Klaw organized a team of mercenaries to help him seize the element from the African tribe who guarded it, the Wakandans. When T'Chaka, the leader of the Wakandan cult of the Black Panther, refused to yield any of the metal from the sacred mound, Klaw ordered his men to kill him. Witnessing his father's death, T'Chaka's adolescent son T'Challa seized Klaw's sonic blaster weapon and aimed it at the marauders, shattering Klaw's right hand with one burst and scattering his troops with a second.

Driven away, Klaw vowed to return and wreak vengeance. When he reached civilization, Klaw had his mangled hand amputated and fitted with a claw-like prosthetic device into which he built a sonic-force blaster. Ten years later, he mounted a second attack on the Wakandans. He was opposed by the Fantastic Four and T'Challa, now the Black Panther, who had succeeded his father as ruler. Thwarted again, Klaw leaped into his massive sonic converter device (the Vibranium for which he had acquired criminally on the open market), hoping to gain superhuman powers to combat his foes. His gamble was successful and Klaw was transformed into a creature whose body was composed of "living sound". In his new form, Klaw battled the Fantastic Four and was pummeled into unconsciousness by Mister Fantastic wearing Vibranium knuckle guards and taken to prison.

Klaw was soon freed by the Crimson Cowl, an alias of Ultron, and invited to join the second Masters of Evil. The Masters of Evil managed to capture the Avengers, but they later escaped. Klaw was subdued by a kick from his old foe, the Black Panther. Too powerful to be imprisoned by conventional means, Klaw escaped and freed some of his cronies from the Masters of Evil. A second foray against the Avengers was less successful than the first and Klaw was again subdued.

Managing to escape custody again, Klaw journey back to Wakanda where he helped steal a device capable of augmenting the metal-disintegrating property of a Vibranium-alloy. Encountering the Thing, the Human Torch, and the Black Panther, Klaw was defeated when the Thing crushed his prosthetic hand.

After rebuilding the device, Klaw joined forces with the murderous Solarr and trapped the Avengers within a solid sound barrier. Klaw threatened to execute the Avengers if the Black Panther did not abdicate the throne of Wakanda to him. The Panther managed to subdue Klaw and Solarr before he could make good his threat.

Savage Land Wakanda and Beyond

Klaw was later freed from prison by a member of the extra dimensional race of Sheenarians, who wished him to use his sonic powers to help open a dimensional portal big enough for their invading armada to enter Earth. Klaw agreed and after a skirmish with Ka-Zar in London, traveled with the Sheenarian to the Savage Land where there was a Vibranium deposit large enough to create the portal. After Ka-Zar repulsed the invaders, Klaw fled into the Sheenarian dimension, and unable to salvage anything substantial from his allies, used their technology to return to Earth.

Materializing in the Nexus of All Realities located in the Florida Everglades, Klaw happened upon the wand of the Molecule Man. Helping the Molecule Man find a body to possess, Klaw and his new ally traveled to New York to wreak revenge on their common enemy, the Fantastic Four. Klaw was subdued by the visiting Impossible Man.

Klaw began to realize that his sonic powers had been waning over the years and undertook an elaborate scheme to manipulate a youth gang into restoring him to full power. Although the scheme worked, Klaw was overpowered by the Black Panther, who turned his hand-blaster on Klaw himself. Klaw's sound-body was apparently disintegrated.

Klaw's prosthetic device was recovered and taken to Project: Pegasus, a government energy research facility, for analysis and safekeeping. When Solarr, another ward of the Project, was inadvertently freed from his containment cell, he sought an ally to help him escape from the heavily-fortified facility. Finding Klaw's hand-blaster, Solarr thought that the Project was responsible for killing him and threw the device angrily against the wall. The sonic vibrations of the impact provided the necessary energy for Klaw, whose mental essence had found refuge inside the prosthetic device, to reconstitute his solid sound body. The two criminals' attempt to escape was thwarted, however, and Klaw collapsed back into his sonic device.

Project scientists soon revived him again in order to study him. Weeks later, when the mutant Dazzler was at Project: Pegasus to have her sound-transducing powers tested, Klaw tricked the mutant into helping him escape confinement. Realizing her mistake, the Dazzler used her body's sound absorbing abilities to siphon Klaw's energies totally into herself. Klaw's mental essence, rendered unconscious, was also transferred to the Dazzler. When the Dazzler expended the vast quantity of energy that is Klaw while aboard the starship of the world devourer Galactus, the advanced alien circuitry of Galactus' craft absorbed it and Klaw's mental essence.

Some time later, Galactus was among the many beings assembled for study by the omnipotent extra dimensional Beyonder. Needing to consume the energy of a planet-sized object, Galactus sent for his solar system sized home base, docked to which was his starship. Doctor Doom, another of the beings abducted by the Beyonder, stole aboard Galactus' home base to find weaponry to battle first Galactus then the Beyonder. While trying to fathom the alien technology, Doom used Galactus' machines to bodily resurrect Klaw, whose mental essence had been flitting through the circuitry of the base. As a result of his experience in disembodied form, Klaw was mildly insane when Doom restored his form. Doom nevertheless exploited the fact that Klaw's energy-form was attuned to Galactus' ship and carved up Klaw's non-organic body into special lenses. These lenses enabled Doom to siphon the energy released when Galactus converted his home base into fuel succeeding in the audacious scheme, Doom attacked the Beyonder and the Beyonder gave up his power to Doom in order to see what Doom would do with it. Doom believed he had totally eradicated the Beyonder from existence, but the Beyonder instead took refuge inside Klaw's now restored energy form. After witnessing how Doom handled his omnipotent power, the Beyonder manipulated Doom into returning it. The Beyonder then dispatched Doom and Klaw back to Earth.

Klaw was among the villains assembled by the newest Crimson Cowl in the newest incarnation of the Masters of Evil, only to be ultimately defeated by the Thunderbolts.

He joined the Intelligencia and helped the team to find Ultron, who returned Earth. At some point later, has battled Thor, Iron Man, although he was able to create constructs of himself, he was defeated and imprisoned by Mr. Fantastic in a special containment unit.

One of his constructs (also called echoes), managed to avoid the heroes and tried to become a new Klaw using more echoes, who were on the loose, and using Daredevil as a new body. Daredevil managed to escape the echo's hideout. While battling it, the construct along the rest of them were desintegrated.
Superhero Class