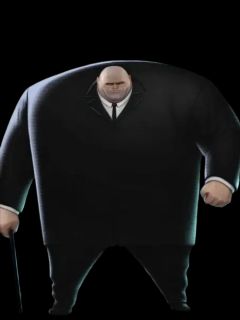 Wilson Fisk, also better known as the Kingpin, is the main antagonist of Sony Pictures Animation's 23rd feature film Spider-Man: Into the Spider-Verse. He is an infamous crime lord and the arch-nemesis of both Spider-Man/Peter Parker and Miles Morales.

At an undetermined point, Wilson Fisk became the head of the company, Fisk Industries, while secretly becoming a major crime lord known as "The Kingpin". He also met and fell in love with a woman named Vanessa and with her fathered a son named Richard, though it is unknown just when this happened and whether Fisk was a criminal by then or not. Eventually, Kingpin also started to benefit the science research & development company known as Alchemax, with its CEO being Doctor Octopus, and even amassed a group of several supervillains that he hired as henchmen on his payroll, including Green Goblin, Prowler, Scorpion and Tombstone. His criminal activities also ended up making him a recurring enemy of Spider-Man during the latter's ten years as a superhero, and, during one of their battles, his wife and son walked in on the two of them fighting. Horrified by her husband's true nature, a terrified Vanessa hurriedly left with Richard, leaving a distressed Kingpin and Spider-Man behind. Unfortunately, as a result of their quick getaway, the two of them ended up dying in a car accident, severely traumatizing Fisk.

Some time after this, Kingpin, despairing over the loss of his family, began a top-secret Alchemax project that involves building a device called the Super Collider, which he believed would allow him to access alternate universes and thus allow him to reunite with his wife and son at long last. Catching wind of his plot, Spider-Man attempted to stop him, as the device was unstable and, even if successful, could destroy all of New York City. Spider-Man ended up fighting with the Green Goblin and Prowler in doing so, while also coming across Miles Morales, who had stumbled into the scene, and realizing that they share the same powers. As Kingpin's two henchmen and Spider-Man fight while Tombstone and the Alchemax scientists watch from the testing area's control room, Kingpin himself arrives and introduces the Super Collider to his enemy, before having the scientists activate it. However, much to Kingpin's distress, Green Goblin ends up shoving Spider-Man into the Super Collider's energy in an attempt to kill him, causing the experiment go awry and the Super Collider to explode, killing Green Goblin and gravely injuring Spider-Man in the process.

Going to Alchemax to create a new version of the USB drive (which had previously broke), Spider-Man leaves Miles behind while he infiltrates the building. However, Miles decides to come along upon seeing Kingpin and Tombstone enter the building. Kingpin begins to pressure Alchemax's CEO and the head of his Super-Collider project Olivia Octavius (Doctor Octopus) into finishing the alternate dimension-travelling machine, while, at the same time, Miles and Spider-Man begin to take the information they need, leading to them stealing Olivia's computer and its system unit while being chased down by her and the Alchemax scientists. After Spider-Man and Miles escape with the computer thanks to Spider-Gwen, Kingpin is seen with Tombstone overlooking the forest while recalling how he lost his family. When Doctor Octopus returns without the computer, he asks why he saw two Spider-Men, despite him killing the hero before he is told and that there are actually three. He is enraged at her for failing, though she insists that the appearance of more Spider-Men from other worlds only confirms that the Super Collider will work and that he will be able to summon as many alternate versions of his family as he wants once it is working again. Kingpin sees her point and has her get to work

Later, after Miles finds out that his uncle Aaron is really the Prowler and escapes from his apartment, the latter tracks him down and leads Kingpin and his other supervillain henchmen; Tombstone, Doctor Octopus and Scorpion, to Aunt May's house, where they and the other Spider-Men summoned by the Super Collider (Spider-Man Noir, Peni Parker and SP//DR, and Spider-Ham) start to fight for the USB drive. Once Prowler gets a hold of Miles and prepares to kill him, only to back down upon realizing that he is about to kill his nephew, Kingpin notices his hesitation and orders him to kill Miles. Ultimately, Prowler backs down, unable to harm his nephew, and Kingpin shoots him in the back fatally for it. Kingpin turns the gun on Miles, though Peter B. Parker kicks him away and has Miles escape along with his uncle who dies of his wound. Upon his uncle's death, Miles' desire to stop and get revenge on Kingpin is driven even further, but, fearing that Miles' inexperience would get him killed, Peter webs him down in his dorm and leaves with the other Spider-Men to destroy the Super Collider, planning on sacrificing himself by staying behind to insert the drive.

That night, Kingpin hosts a gala ostensibly in honor of the fallen Spider-Man, even inviting his widow Mary Jane Watson to the affair, but in reality only uses it as a distraction while his scientists finish rebuilding and reactivate the Super Collider to summon an alternate version of Kingpin's family. The Spider-Men manage to sneak into the affair and make their way below Fisk Tower to destroy the Super Collider, but end up getting ambushed by Doctor Octopus, Scorpion, Tombstone and Kingpin's mobster henchmen (Kingpin and his goons having anticipated that they would come and foil the plot). However, Miles, now fully embracing his role as Spider-Man, quickly arrives to help, and they succeed in defeating them all. Enraged at the Spider-Men for interfering with the Collider again and ruining his chances of reuniting with his family, Kingpin jumps in to stop them after all but Peter had been sent home, the latter deciding to leave Miles to deal with the villain, fully confident that he will be able to win and shut down the Collider. The two proceed to fight within the Collider, and in that moment, alternate versions of Vanessa and Richard appear, who are all equally horrified at his actions just as the others had been.

Blaming Spider-Man for taking his family from him once again, Kingpin brutally beats Miles down, sadistically remarking that he's going to make sure he never sees his own family ever again. However, encouraged by his father, Miles stands up to Kingpin and remarks that he will never be separated from his family, before delivering a venom blast which seemingly incapacitates Kingpin and ends up destroying the Super Collider for good. Afterwards, Miles webs Kingpin up and leaves him to be found and picked up by the New York City Police Department, who discover the Kingpin shortly after Miles and his father make amends.
Superhero Class