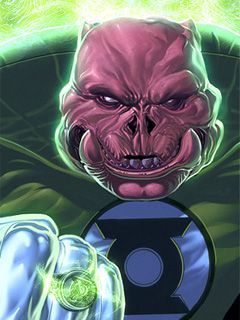 Bolovax Vik was one of the most crowded planets in the universe; it had 16 billion residents with a communal mind. Kilowog was a geneticist and one of Bolovax's most brilliant minds. After the previous Lantern, Branwill, died, Kilowog was chosen to be a member of the Green Lantern Corps. It was a great honor, but it meant leaving Bolovax and going into space on missions; this was tantamount to exile for a Bolovaxian. Nevertheless, Kilowog carried out his duties with pride. He would go on to be one of the Corps' best recruiters and trainers.

During the Crisis on Infinite Earths, Bolovax Vik was destroyed. His ring automatically protected Kilowog, but not his people. Acting quickly, he placed all 16 billion life energies into his ring. By sheer force of his will they survived until Kilowog found a suitable planet to release his people. Sadly, the planet was soon destroyed by Sinestro. Kilowog could not rescue them again. He was now alone for good.

Along with some other GLs, Kilowog was assigned to Earth, where he spent some time in the Soviet Union. He was convinced that socialism was the closest philosophy to that of Bolovax Vik, but he couldn't find any government that practiced it purely. While in the USSR Kilowog helped their scientists perfect the Rocket Red Brigade, a symbiosis of forced genetic evolution and advanced technology in the form of powerful armor.

During his time on Earth, Kilowog became close to the group of Green Lanterns who were assigned there. He always had a soft spot in his heart for Arisia of Graxos IV, a fellow ex-Green Lantern who helped him face his ultimate loneliness and loss of his people. However, since Arisia had feelings for Hal, he decided to just be her friend. Kilowog was also good friends with Salakk, John Stewart, Katma Tui and Ch'p, although the latter was initially mistrustful of him. Kilowog's relationship with Hal Jordan remains firm despite Hal's actions as Parallax.

Kilowog was one the last Green Lanterns to engage Hal Jordan when Jordan became possessed by the Parallax entity. Driven insane by grief, Jordan used his ring to destroy his old friend, blasting Kilowog's body and leaving a blackened skeleton behind. Vengeful aliens later used 'black magic' to summon Kilowog's spirit, transforming him into the Dark Lantern and sending him to exact revenge upon his former friend. This mission of vengeance ended when Oa was restored by Tom 'Pieface' Kalmaku, who used the residual energy of Jordan's old ring to redress some of Hal's former sins.

Restored to life by Kyle Rayner and Ganthet, Kilowog participated in the efforts to restore Oa and the Green Lantern Corps. He received a power ring from Kyle and fought alongside Rayner, Guy Gardner, John Stewart, and a resurrected Hal Jordan in the battle against Parallax. After Parallax was once again imprisoned in the Central Power Battery, Kilowog began the monumental task of training thousands of new recruits, whom he affectionately dubbed 'poozers'. He apparently bore no ill will towards Hal, and playfully challenged him to a wrestling match in one of Oa's famous mud pools.

When two of his trainees were captured by the Spider Guild, Kilowog went on a solo mission to rescue them. He participated in the defense of Oa from the Spider Guild invasion, giving his recruits field instructions on how to overcome the yellow weakness of their power rings.

During the Infinite Crisis, where effects from the first Crisis on Infinite Crisis took place, Kilowog and Kyle Rayner aided efforts on Rann and Thanagar during their war.

Being a part of a greater whole is very important to Kilowog. His greatest fear is being alone, but with so many friends he has nothing to worry about. He is exceedingly loyal, kind, generous, and humble. His power ring constructs display amazing raw power, and Hal Jordan has noted that Kilowog's ring is the only one that makes a sound (usually a loud boom) when it is used.

During the Blackest Night event, Oa is invaded by a swarm of black power rings, that turn all the deceased Lanterns in the Oan crypt into Black Lanterns, who promptly attack the living Lanterns. Kilowog is attacked by the reanimated Ermey, who mercilessly berates him for not preventing his death, and for saving the life of Sinestro, citing the deaths Sinestro had caused as being Kilowog's fault. Gaining the upper hand, Ermey attempts to rip out Kilowog's heart, but is interrupted by the announcement that Black Lanterns' rings have reached one hundred percent power. Subsequently, the Black Lanterns are given new instructions: to devour the Central Power Battery. Ermey departs for his new objective, joined by the rookie Lanterns he had just killed. Kilowog then joined his fellow Green Lanterns in their attempt to protect the Central Power Battery.