Justice League and Avengers free for all fight

What if every member of both the avengers and the justice league were in a free for all fight?
Rules:

-Bloodlusted
-powers and feats from every continuity of the DC prime Earth.

2.8K
I’m gonna say JL since bloodlust but if it’s current versions that could be a huge downfall for the JL because Immortal Hulk is insanely powerful and soloed the Avengers if I remember correctly also his would be Cosmic King Thor too who is one of Thor’s most powerful versions and he killed an amped Galactus and the Black winter, but I will say the JL just because I’m behind on there current versions

18.1K
I don’t think there’s any question. The avengers were specifically made to be a more relatable and grounded group. JL is more mythological while avengers are more relatable. So in a fight, Justice League would win since everyone besides Batman is metahuman at least.

I think this is honestly what divides the fans between DC and Marvel. I think you pick your favorite team/company based on your personal preference. Do you want larger than life and mythical/powerful icons? Choose the Justice League. Do you want more grounded, human and relatable heroes that have similar problems as you? Choose the Avengers.
Last edited: 2 y 2 d ago.
show 5 replies

5.1K
I would hope that you do not transform into an unstoppable rage monster when set off.

Can you stop assuming people just back the characters they like more. Not everyone's biased like you

18.1K
What the hell is your problem? I wasn’t even talking about that, I was just explaining why i think people like one company over the other. You’re just looking for ways to discredit me. You need to calm down.
Last edited: 1 y 11 mo 26 d ago.

5.1K
No, not really. Part of what made me a Hulk fan at a young age WAS his tremendous power. I could defend characters in other debates but I spend my time on Hulk because more people are uneducated on him.

18.1K
I’m speaking generally, of course there are exceptions.

53.5K
I Don't know why, but i see the Avengers as the Justice League's Archenemy

47.9K
JL stomps. The only members of avengers who pose a challenge are hulk and thor, who can maybe take down the JL members one by one but not collectively. But see its not that simple. Usually JL would stomp since even their second weakest member (aquaman) solos everyone except hulk and thor. But the characters are BLOODLUSTED , if avengers play smart they can win. But before that I would like to say one thing. Thereotically flash solos avengers and JL in a couple of seconds. His speed is so fast nobody should not react to him. But I have said it in a past answer that comics imo negate speed factor during matchups. In hulk vs superman battle, @Mr_Incognito brought up the fact that cap has tagged hulk. I couldn't refuse that. Not only has cap tagged hulk but he has even defeated hulk because he knew about what "the weak points" of hulk's body. Lol. PIS. You can say whatever you want, comics go according to what writer wants. 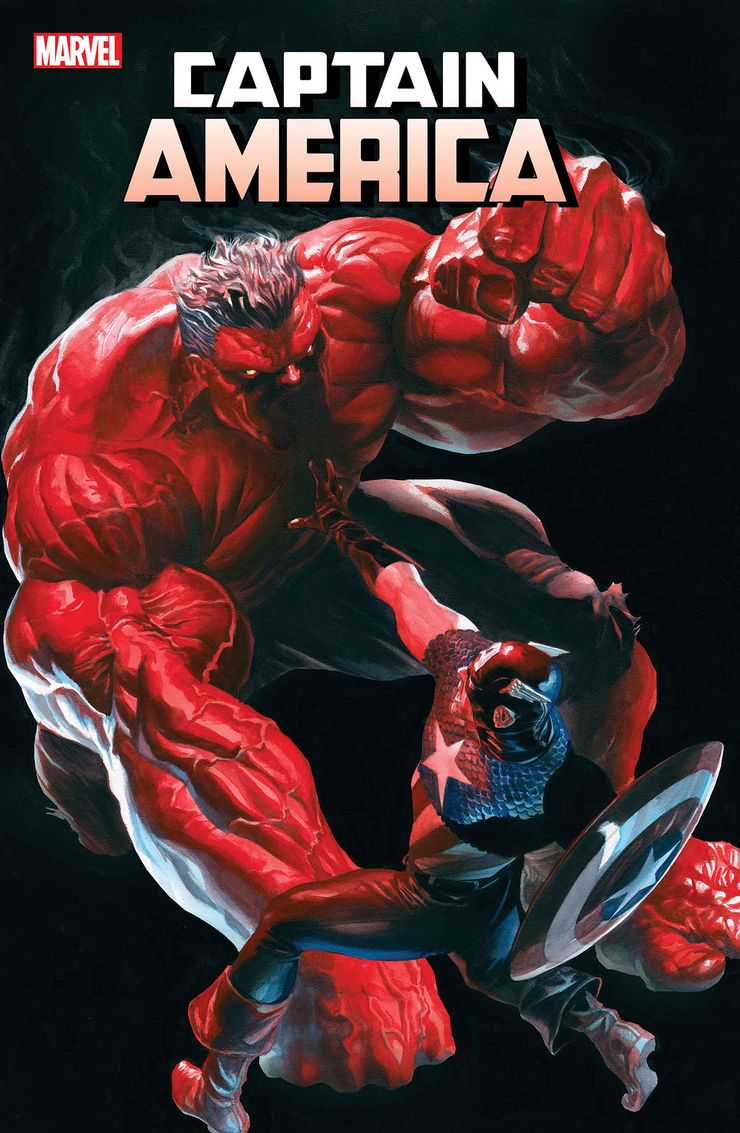 Here we see red hulk will return in captain america which will come out in december. Now i don't know who would win but honestly he is fighting red hulk, the same red hulk who brutally defeated silver surfer and thor once and regularly fights hulk, which establishes his speed way above ftl. I don't see cap even touching him but lol they are fighting. Comic logic.Thing has tagged silver surfer which makes zero sense but as i said comics negate speed advantage one has over other. Thats why flash has been tagged by way inferior beings in speed as compared to his speed like doomsday and superman (they are incredibly fast but not as fast as flash). So flash should solo, but if we take into account how so many beings have been able to tag him, he also has a fair chance of losing.
Now one important thing. JL wins the battle but not the overall war. Hulk makes the difference. Thor is a low tier immortal but he still can be killed. Same with hulk. But killing hulk doesn't work because even if he dies against JL (which he will) that would give birth to immortal hulk, who can probably solo JL. But lets be fair. We are only including base hulk . Base hulk would lose. IH would win but thats unfair for JL. So lets not include immortal hulk.
I said JL should win but avengers win and one character mostly makes the difference. Not hulk. Thor. He has an incarnation of what you call warrior madness where his powers increase 10 times. Now imagine 10 thors against JL. JL might lose. And why i included this incarnation is because thor can switch in warrior madness at will and since he is bloodlusted he will go in warrior madness. Now hulk being bloodlusted. I think you are talking about base hulk because bloodlusted wbh or hotm solos JL. Now if hulk goes at characters like aquaman, batman (both are nonfactors against hulk ) and wonder woman then he has agood chance of not only beating them but also turn into world war hulk, the same hulk who defeated sentry while holding back, who stalemated galactus (who would solo JL pretty easily). As wwh he has a very good chance of defeating superman and green lantern simultaneously while thor will handle flash then. Now my answer might seem biased to avengers but it is not so. This is one of the rarest case in which avngers would win. 90 percent of the time JL stomps. But in the end, I would repeat that thing again, JL wins the battle but not the war cause after they kill hulk this guy would be ready to kill JL. 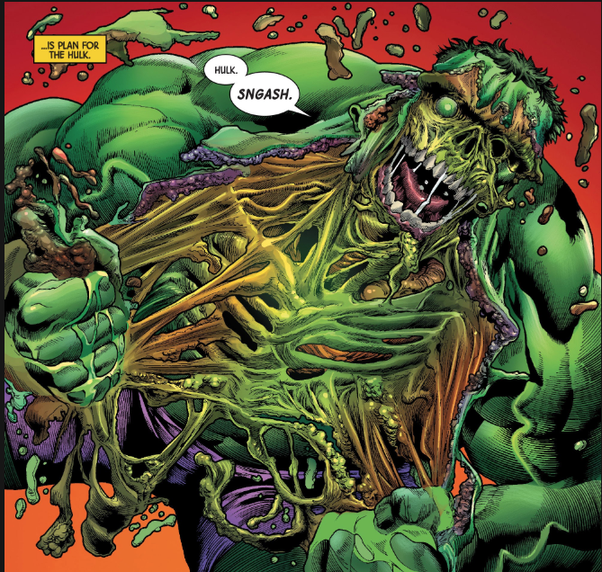 Such a cute picture, isn't it?
But yeah JL would win as it is not fair for this guy to be included.
Last edited: 2 y 14 d ago.
show 4 replies

47.9K
@Mr_Incognito Immortal hulk is the most horrifying comic i have read and i love it for that. Honestly this picture is not as horrifying compared to some other ones but i don't wanna show it. It is very unpleasant and might disturb others.
Last edited: 2 y 14 d ago.

47.9K
Yes @Tyrannus . I was expecting him to return in Immortal hulk actually because it was revealed at the end of immortal hulk 20 that thunderbolt ross had come out of his grave, and I was pretty excited thinking he would return after 5 or 6 issues and would be the immortal red hulk and fight immortal hulk. With this green door and one below all stuff every gamma being is now immortal. First it happened with hulk, then doc samson, then rick jones, now thunderbolt ross. I am not sure if he will be called immortal red hulk or just red hulk but whatever the case will be, he would be immortal because of the green door. I think cap's chances are zero against red hulk, maybe red hulk will stop fighting on his own at the end cause thunderbolt ross is a patriot after all.

5.1K
It really depends on how the fight plays out. Part of me is saying to go all in and write out an entire fight analysis, and part of me just wants to go to sleep.
Last edited: 2 y 15 d ago.
show 1 reply

1. Flash: Barry's biggest weakness is that he's too much of a nice guy so if he's not holding back anymore, everyone here should die simultaneously. It'd be over in a flash.
2. Hulk: I know @Mr_Incognito won't like this answer but the facts show Hulk's excellent record as a known team buster. The Avengers have never been able to take him down and I can't see the JL doing anything different.
3. Thor: Superman's weakness to magic will give Thor an important advantage over him making WW the next biggest threat. However his feats do seem to surpass her and mjolnir is a huge advantage.
4. Superman: Needs no explanation. He's beaten everyone in the JL consistently before except for WW and Flash. The remaining Avengers would be light work.
5. Martian Manhunter: I may be lowballing him quite a bit here but I've always found him inferior to beings like Superman. He cannot mind control the Hulk and Flash is too fast for everyone. Thor if he really wanted to should electrocute him to death.
6. Wonder Woman: Similar position to Superman but without any exploitable weakness and has superior skills to match.
7. Green Lantern: I don't like putting him so low but he's going up against too many heavy hitters. He still destroys the remaining with ease.
8. Aquaman: Most of his feats are out of water where he's already at a disadvantage and yet his feats are still quite impressive. He can send Superman flying and is more durable than people realise.
9. Iron Man: Everyone else at this point is street level, His biggest threat now is Ant Man of all people
10. Ant Man: Shrink yourself inside someone and expand. Splat.
11. Captain America: The best h2h fighter here apart from Batman but unlike Batman, CA is boosted and guarded by the toughest material known in comics.
12. Batman: Batman
13. Hawkeye: May not be as good a fighter as BW but his bows make up for it.
14. Black Widow: I really don't know why she's even an Avenger.
show 5 replies

18.1K
I actually agree with the majority of your analysis here. I have a few objections, but I agree overall. I personally would switch Hulk and the Manhunter, since Manhunter has so many powers and he can scan the whole planet telepathically. I think WW and GL at least have a chance against Hulk. Thor is also a little high for me at least but I think i’ll leave that be. Manhunter could go intangible to avoid the lightning. Nice list 👍🏻
Last edited: 2 y 16 d ago.

18.1K
Also, putting respect on Barry? Love to see it. You’ve got my praise for that. Maybe i’ve been wrong about you Tyrannus.

The Flash is one of the few people who can end fights before they even begin. He's arguably the most dangerous hero to exist. At least with the others there's a chance for victory. With the Flash there is none.

72.3K
@TheImaginator Can you list the members from each team?