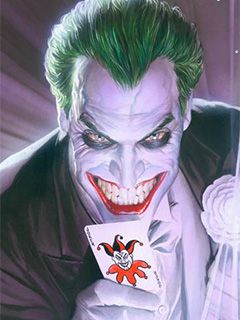 Due to his chemical submergence, Joker has gained beyond average advantages over normal humans as well as further exposure has tainted his physiology.

It is speculated that the Joker's exposure to chemicals may have heightened his resistance to pain. It is also implied that he is masochistic in nature, and thus enjoys any pain received, making it an ineffective way of dealing with him.

Joker's blood is tainted. It has been said that "being an avid consumer of his products, Joker's immunity to poisons has been built up over years of dedicated abuse." When a mosquito sucks the Joker's blood, it "writhes and whines, choking on tainted blood".

The Joker is immune to his own venom as well as various similar toxins.

The Joker has cheated death numerous times, even in seemingly inescapable and lethal situations. He has been, among other things, caught in explosions, electrocuted, shot repeatedly, and dropped from great heights, but he always returns to once again wreak havoc.

The Joker has, at times, shown to be fully aware of being a comic book character, even directly talking to the reader. However, most characters ignore this, due to the fact that he is criminally insane.

The Joker's insanity, or his frame of mind, leaves him immune to the Spectre's judgement, though warranted, as Batman explained once that the Joker doesn't actually know what is right and wrong, a crucial understanding the Spectre needs to judge. In a way, one has to know one's deeds are evil or wrong for the Spectre to judge, and the Joker doesn't. Also, both Jim Corrigan and Hal Jordan Spectres have had major problems with navigating the Joker's mind, Corrigan even managed to get lost in it and Jordan literally was blasted out of his boots to the moon when he tried.

The Joker is portrayed as highly intelligent and skilled in the fields of chemistry and engineering, as well an expert with explosives. From his first appearance onward, he has been consistently portrayed as capable of hijacking broadcasts - usually news programs - of both the television and radio varieties.

The Joker has moderate skill in hand to hand combat. Over the years it has been shown that although Batman is stronger, the Joker is faster and more agile, and his fighting style is chaotic and difficult to predict. The Joker has been known to be able to hold his own in hand-to-hand combat against Batman, however every time he is subdued by Batman, it is through physical force. However, the Joker has proven to be very skilled in the area of martial arts as well, this being proven when beating the Batman once in a fight without "cheating". However, this skill in fighting can also be questioned, due to different artists having different reincarnations of the Joker. In some cases, he is so weak, that Batman can take him down with a single punch, whilst in other cases, he has proven to be more than a match for the Dark Knight.

Joker is adept at torturing his victims endlessly, including shooting Batgirl, torturing Robin to death and beating Damian into submission.