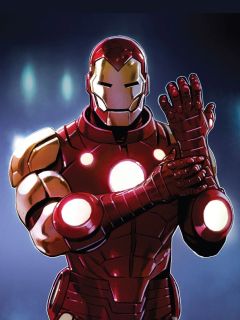 Stark is a mutated human due to the injection of the Extremis bio-virus and the "Bleeding Edge" armor nanotubes which are powered by the arc reactor in his chest.

Psi-Shields: Due to new S.H.I.E.L.D treatments, Stark's mind is shielded from even the strongest telepaths.

The Extremis virus has fused Stark's armor to his body. Initially the inner layers of the Iron Man armor were stored in the hollows of his bones, but later his entire exo-armor would be contained within carbon nanotubes. He is able to manifest and control the armor through direct brain impulses and even utilize some of its powers when unsurfaced. He has direct, cyberpathic control over the communication devices, scanning equipment, and recording devices located in his helmet.

The Extremis virus grants him enhanced speed reactions and movements.

Stark is capable has the ability to biologically heal himself and repair the armor.

His armor is made up of Nano-Machines that can be commanded to turn into any type of structure upon Stark's skin. Examples include clothes, other armors, additional weapons over his armor like a boxing glove or a modified laser cannon by having the nano-machines change their properties into whatever Stark wants them to. They can also dissociate to transform into the Iron Man armor whenever Stark wishes.

Quite apart from the powers granted him by the suit, Stark is an inventive mechanical engineering prodigy, constantly creating new technology and looking for ways to improve it. His intelligence is classed as above genius. He is one of the three smartest people on Earth. Furthermore, this extends to his remarkable ingenuity dealing with difficult situations such as difficult foes and deathtraps where he is capable of using his available tools like his suit in unorthodox and effective ways.

Expert Engineer: He is an excellent engineer and mechanic capable of fixing almost, if not all, machinery.

Stark is extremely well-respected in the business world, able to command people's attentions when he speaks on economic matters by virtue of the fact that he is savvy enough to have, over the years, built up several multimillion dollar companies from virtually nothing. He is known for the loyalty he commands from and returns to those who work for him, as well as his impeccable business ethics. He also strives to be environmentally responsible in his businesses, and in one case, immediately fired an employee who made profitable (but illegal) sales to Doctor Doom. He states that if he wanted to, he could give away his entire fortune and build it up again within a week.

He is a brilliant tactician capable of quickly formulating strategies and new plans should the situation change.

Stark was trained in unarmed combat by Captain America and has become quite physically formidable on his own when the situation demands it. He is also a great melee fighter while in the armor as a single punch is as strong as a solid steel ball traveling at 3,500 ft./sec.

As evidenced by his two serious bouts with alcoholism and subsequent recovery, Stark is possessed of tremendous strength of will, never giving up and often emerging from defeat even stronger. It is arguable that the true "Iron Man" is not the armor, but Stark himself.