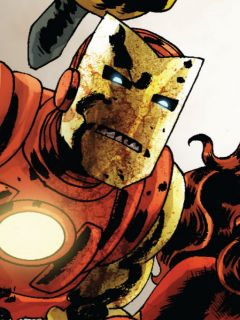 Little was detailed about Iron Man's life before the zombie plague arrived on Earth-2149, however it can be presumed that it followed much the same path as Earth-616 counterpart.

Iron Man was at Avengers Mansion when Ash tried to blast his way into the Mansion. He and the other Avengers greeted Ash and demanded he explain himself. The man began ranting about an Army of the Dead, and began to get a little hot under the collar. Scarlet Witch spirited him away.

Presumably, those remaining at the Avengers Mansion after Col. America and the others left to investigate reports of purple lightning and something fallen from the sky received a call from Nick Fury to join the resistance aboard the S.H.I.E.L.D. Helicarrier, and left to join them.

While a team was dispatched back to the surface, Iron Man and a few of the others stayed behind to try and work out how exactly to stop this thing. Tony showed Nick Fury a teleportation device he had been working on. Unfortunately, he explained, it could only work with a similar device in the destination dimension, and so it would need coordination with the reality in order to escape. Just then, the zombified Fantastic Four burst into the lab and attacked the un-armoured Stark. Before he could put on his Iron Man armour he was bitten. Reed then told the others to collect the pieces of the transporter, and started moving it to the Baxter Building.

When Beast and Reed Richards found a sizeable stash of meat in Latveria and the surrounding area, Cage and a huge horde of zombies headed off to lay siege to Castle Doomstadt. Unable to gain access to the fortress, presumably, Luke got held up by the risen Deadite Legion, and at some point returned to New York.

In New York, the Silver Surfer appeared in the sky above them, and Stark led the charge against him, managing to score some effective blows despite the Surfer blasting his legs off. With the Herald of Galactus down, Hulk managed to bite his head off, and Rogers, Stark, Parker, Pym, Cage, and Wolverine managed to get a piece in them at the expense of the rest of the zombies. Realizing they had somehow been imbued with the Power Cosmic, the seven newly Power Cosmic Zombies fried the masses of zombies gathered around them in a fruitless attempt to improve their flavor.

Suddenly, looming over them appeared Galactus, who has come to devour their world. They attacked him with the Power Cosmic, but he repelled them with his much greater power. They retreated to Pym's lab, and formulated a plan for bringing down the giant being. With the last sheets of Vibranium from Wakanda, the Power Cosmic Zombies built a gun-like contraption which combined all of their individual beams of Power Cosmic into one super strong beam. While moving the weapon into position they noticed that a group of zombified super-villains were attacking Galactus, but having little effect. The Power Cosmic Zombies took their first shot, but it took another to put him down.

At this point, the heroes and the villains faced off for who would get too eat him. Stark and his group were victorious and were tucking into the World Devourer's body quickly before he could get up. Suddenly, the bodies of the zombie Fantastic Four dropped into the street closely followed by a miraculously uninfected Dr. Doom. After they tried to attack the ultimate Dr. Doom, they used the power cosmic granted by Galactus to travel through the cosmos and eat other life forms.

After travelling through the cosmos devouring planets as they went, the Zombie Galacti arrived at the Skrull home planet. Wolverine ripped through the defensive field with his claws, and the Galacti squeezed through. Like many civilizations before them, the Skrulls tried to defend themselves by firing missiles at them, but the zombified heroes destroyed them easily with the Power Cosmic.

On reaching the planet surface Tony and Luke first came across some kind of bug, and they attacked that, then turned to gorge on the Skrull populace. With most of the Skrulls on the ground devoured, the Zombie Galacti concentrated on the Skrull Warships circling them. Iron Man and the other Zombie Galacti penetrated the hulls of the warships and feasted on the delights within.

The Zombie Galacti traveled in search for and to devour Skrulls in the city itself. Iron Man consumed a Skrull General and Sergeant, who were running from Wolverine. They seemed unstoppable, but chasing after a group of Skrulls they ran into the bug they met when they first arrived. This time, however, it had been zombified and ate some of the Skrulls. The zombified heroes attacked but the bug punched them into the side of a building far away. They decided to eat some more, before they attacked again.

Cage finally rejoined the rest of the Zombie Galacti, where they quickly returned to bickering and arguing. Stark lost his temper and tried to blast Cage with a bolt of Power Cosmic, but it had no effect on a similarly powered being. Luke simply walked up to Stark and punched him high through the air.

Iron man rejoined his compatriots, and they confronted the New Fantastic Four in a crashed Skrull ship, and demanded that they hand over the Transdimensional device that they had been using. Wolverine decided instead to search the Skrull ship for any injured Skrulls to snack on, but only came across Thanos, and his mistress Death. They offered the Zombies a reward for their destruction; an end to their undeadness. Though Spider-Man discovered that they were far from what they seemed. As the projections of Thanos and Death disappeared, the two Skrulls beneath begged for their lives.

With the last of the Skrulls eaten, the Zombie Galacti decided to explore the Galactus element to their powers, and began to consume the planet, eventually leaving themselves floating in space.

At the edge of the known universe, Tony and the other Zombie Galacti were joined by Thanos, Firelord, Gladiator, and Dark Phoenix. At some point in the previous forty years, Iron Man had reverted to his original costume, and obtained a cybernetic lower body. Thanos also joined but he was killed by an angered Hulk.

It seemed that they had consumed most of the universe, and decided to make their way back to Earth in order to rebuild the teleportation device originally built by Stark. Along the way back to Earth, Tony and the other zombies stopped and devoured a living planet and continued their trek back to Earth.

Upon returning to Earth, Tony and the other zombies discovered a colony of human survivors in New York, now known as New Wakanda. After Giant Man declared a plan to create a breeding program to have food for eternity, Spider-Man and Luke Cage rebelled and fought Tony and the others. A force field was activated, protecting Black Panther's stronghold and the survivors, but sealed Gladiator and an unconscious Bruce Banner inside and cut Cage in half. Gladiator got in a fight with Spider-Man and Cage, and was also attacked by someone in Tony's Mark I suit. After Gladiator was killed, Tony asked who was in the Mark I suit, and it was Forge, who said that Stark International's doors were no longer closed and that he updated everything Tony ever did.

The zombies departed for the Baxter Building, where they discovered that Reed Richards' security devices were still activated, and they were attacked. After realizing Forge must have taken the teleporter, they returned to the force field, where they found Wasp, Black Panther, Spider-Man, and Luke Cage (with a cybernetic lower half as well). Giant Man agreed to take the device only and not eat the survivors, but once the field was deactivated, the "good" zombies attacked the others. The force field wass reactivated, but Tony found his way in. He promised that he wouldn't eat too much before getting the device and entered the stronghold.

While looking around, searching for survivors, he was intercepted by the new Colonel America, Forge (in the Mark I suit), Malcolm Cortez, and the Acolytes. After the force field was deactivated and the zombies got through, all of the other zombies realized that their hunger was gone. However, their moment of shock was cut short, as Bruce Banner awoke earlier (and inadvertently deactivated the force field) and became the Hulk. He broke through the wall and demanded to eat everything he could. Tony was one of the zombies that tried to stop the Hulk, but was killed by the Hulk when he broke through Tony's armor.
Superhero Class