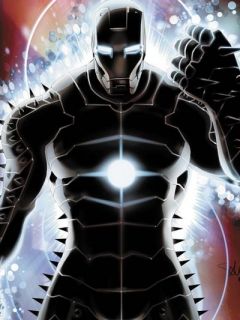 When the forgotten Asgardian god of fear - Odin's brother and deadly rival, who had been imprisoned for millennia - was released by his reincarnated daughter Skadi, he released seven hammers containing the essences of his generals of old on Earth. As the eight demonic beings rampaged on Earth, Tony Stark - having faced Mokk, the Breaker of Faith - realized more power than humanity possessed was necessary to stop them. He sacrificed his sobriety as a supplication to Odin, demanding the All-Father appear and give them at least a fighting chance. Odin, who had been planning to raze Earth to defeat his brother, relented and gave Iron Man access to his Asgardian resources - unearthly metals, the expertise of the dwarven smiths and empowering enchantments - to create mighty weapons for eight of Earth's heroes.

Iron Man plunged himself, armored up, into molten Uru - the magic-absorbing metal from which the invincible Asgardian Destroyer and Thor's mighty hammer Mjölnir were forged - and was enchanted, along with the other weapons, by Odin himself. When he emerged, his armored form resembled the Destroyer, and he faced the so-called Worthy in the last stand of Earth's heroes against devastation.

The battle was won, and afterwards, Odin removed the enchantment, and Tony Stark expelled the Uru from his armor.