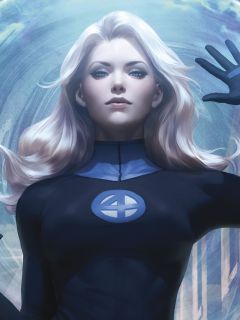 Susan Storm and her brother, Johnny, lived uneventfully on Long Island until their mother, Mary Storm, died in an automobile accident. Their father, Franklin Storm, a doctor, failed to save her. Despondent, he descended into booze and gambling, eventually winding up in a penitentiary for murder. The children went to live with their aunt Marygay. Susan, only 12, developed a crush on her aunt's boarder, Reed Richards, an honors student at Columbia. When it came time for Susan to go to college, she followed Richards to California, where she half-heartedly tried to break into show business.

Reed was working on an experimental starship when the project lost its government funding. He decided to launch the prototype, certain that the flight would succeed and attract more funding. Susan went along for her own reasons: love of adventure? potential fame? romantic gesture? Ben Grimm, a test pilot, took the controls. Johnny filled out the crew. Reed had made one mistake: he failed to shield the cabin from cosmic rays, and a chance solar flare intensified the radiation. The experience gave each of them superhuman abilities, and perhaps more importantly, it forged almost unbreakable bonds between them. They became the Fantastic Four, and Storm took the name Invisible Girl.

In the early years of the FF, Sue spent much of her time keeping the team together. Reed spent long hours in his laboratory; Grimm moped over his appearance; Johnny acted out like any teenager. Her power of invisibility had little use in battling supervillains such as Doctor Doom and Galactus, but her empathy and common sense prevented several breakups and defections. Even though she was best suited to act as spokesperson for the FF, she would have encountered resistance in the early 1960s, so Richards took on that job as well. Her discontent manifested itself in an attraction to Namor, who returned her affections, but the relationship never matured.

She soon discovered new powers: she could turn other objects (besides herself) invisible and project and manipulate powerful force fields. Although unable to perform offensively on a par with the Thing, she could defend against almost any threat.

Sue eventually married Reed. A difficult pregnancy followed, during which Crystal of the Inhumans took her place on the team. At the last moment, to save the unborn child, the FF had to visit the Negative Zone and borrow the Cosmic Control Rod of Annihilus.[4] Her son Franklin, named after her father, manifested strong and unusual powers almost immediately. When Annihilus kidnapped Franklin to tap those powers, they increased exponentially, and Reed felt he had no choice but to inhibit Franklin's mental activity. It was the last straw for Sue, who left Mr. Fantastic and took Franklin with her.

During Sue Storm's second hiatus, the Inhuman Medusa took her place. The old bonds, though, drew Susan back to the team.

During an extended trip to the Negative Zone, a sort of second honeymoon, she conceived another child. Seeking some peace for this pregnancy, Susan convinced Mr. Fantastic to move to the Connecticut suburbs, where they posed as the Benjamins. This unborn daughter began to give off radiation. Despite the efforts of Mr. Fantastic and several other experts, the girl was apparently stillborn.

Psycho-Man took advantage of Sue's fragile self-control at this point and amplified her negative emotions. She became Malice, with all of the Invisible Girl's powers but none of her restraint, and attacked the FF. Mr. Fantastic helped her throw off Psycho-Man's influence, but she lost control again when the FF confronted Psycho-Man; she turned his own Control Box on him, which shorted out his nervous system and nearly killed him.[8] The episode would have lasting effects: the Invisible Girl changed her name to Invisible Woman; she discovered how to use Force Objects (see Powers below); and in the long term, she lost a measure of self-confidence, knowing that Malice still lurked inside her.

Sue left the FF again, this time with Mr. Fantastic, to spend time with Franklin, who had regained his faculties and needed full-time mentoring. They worked part-time with the Avengers for a while. They also helped the Silver Surfer resuscitate Galactus, during which Sue came in contact with the Infinity Gems. Distrustful of such power, she fell prey to Malice again. The soul gem tried and failed to combine Reed's and Sue's souls, which brought forth the In-Betweener and sent Malice back to Sue's subconscious..

The FF, as always, pulled them back.[11] In the Infinity War, Sue had to confront her doppelganger and incorporate its evil into herself. That boost allowed Malice to regain control temporarily[12]. Sue Storm struggled against Malice's influence, inevitably losing ground. When Malice manifested again, her son (as Psi-Lord from a possible future) drew Malice's essence into himself.[13] She has not reappeared since, and Psi-Lord has returned to his future.

That was only the beginning of a tumultuous period. Reed disappeared for some time, apparently killed. Sue Storm became leader of the FF, recruited Ant-Man to take over Reed's role, and quickly grew into her new responsibilities. Effectively a widow, Sue had to fend off many potentials suitors, especially Namor. She never gave up looking for Richards, though, and after a long search, she found him stranded in the past. Their reunion was bittersweet; Reed felt threatened by Sue's newfound competence and confidence.

The whole team appeared to die next, in the final battle with Onslaught, who had kidnapped Franklin (now back at his "normal" age). Instead they (and the Avengers) found themselves on Counter-Earth, in a pocket universe Franklin had created to save them. In a sense, they had been reborn and had to start their lives over.

Once the heroes on Counter-Earth realized what had happened, they returned to their original homes. There Doom's favors, as always, had strings attached. His main focus had shifted from science to sorcery, and he used Valeria as a focus to cast spells against the FF. His own hubris led to his downfall--his infernal patrons dragged him to the underworld of Haazareth.

With Doom gone, Richards claimed Latveria in the name of the FF and began dismantling Doom's arsenal. The international community saw it as a test of sovereignty and protested. Doom returned to find himself in a trap--to escape, he possessed Sue, then Grimm. To put an end to Doom once and for all, Richards killed Grimm.

For his reckless behavior in pacifying Latveria, as well as for murdering Grimm, Sue left him again. To avoid charges, Reed gave up most of his patents and thus most of his income. As further atonement, he convinced Sue and Johnny to follow him to Heaven, where they succeeded in returning Grimm to life.

With their fortunes and their reputations in disarray, they took regular jobs and lived in regular homes. Sue became a teacher.[19] She also trained in the martial arts under Iron Fist. Reed Richards eventually revealed that he had staged the loss of his fortune, because he wanted the others to experience the normal lives they lost in his experimental starship. With few regrets, they returned to their former lives. To help Johnny develop responsibility, Sue forced him to become the business manager for FF Inc., a job he gradually grew into.

A game of musical powers ensued. A band of aliens, survivors of Galactus, came to Earth to neutralize Susan. They had developed a planetary cloaking device, and only Susan could help Galactus bypass their device. Reed Richards used another device that, as far as the aliens could tell, removed her powers; instead, it traded Sue's and Johnny's powers. The immediate threat over, Reed reversed the trade. As a "reward" for derailing the cloak project, Galactus made Johnny his new herald for a short time. An aftereffect of Johnny's power cosmic removed everyone's powers temporarily.

Most recently, the Civil War split the team once again. Mr. Fantastic supported the Superhuman Registration Act, while Sue and Johnny joined the resistance. During the final battle , however, Mr. Fantastic shielded Sue from an attack by the Taskmaster and was severly wounded. Invisible Woman helped clean up New York in the aftermath of the war and, along with the other Secret Avengers, was granted amnesty. She has reconciled yet again with Reed.