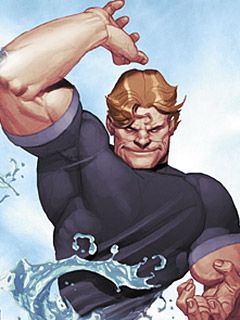 Soon after discovering his powers, Hydro-Man set out to find those he held responsible for his condition in order to make them pay. He eventually encountered Spider-Man, and on their second altercation, was defeated when Spider-Man managed to splatter the nucleus of his body sufficiently far enough apart that Hydro-Man could not reform himself before evaporating.

A few weeks later, Hydro-Man reintegrated his form in a water tower on a Manhattan rooftop where apparently the majority of his body particles had fallen as rain. Returning to his favorite pub, he was chagrined to find William Baker, alias the Sandman, romancing his sometime-girlfriend Sadie Fricke. The two criminals soon began fighting over her until Spider-Man came along to try to stop them. Turning their attentions to him, the two joined forces against their mutual foe. Spider-Man, however, tricked the two into running into each other, each in his altered particulate state. Collapsing into the harbor, the two soon emerged from the brine as a composite sand-water creature containing both of their substances but neither's full intelligence. Dimly recalling their desire for Sadie Frickett, the mud-being sought her out at her apartment. After getting over her initial shock, Frickett decided to exploit the creature's devotion to her and through a theatrical agent, arranged for a special exhibition of the mud-thing. The creature inevitably went berserk but was stopped when a special gas sprayed from police helicopters dehydrated it and caused it to crumble. The soggy sand was scooped up by the authorities and taken to a police laboratory where researchers tried to restore the men to life by various stimuli, including chemicals and radiation. Believing the task was hopeless, the police dumped the canister containing them. A short time later, Hydro-Man and Sandman managed to integrate themselves into their separate rightful forms. Wanting no more of each other's company after their humiliating ordeal, the two went their separate ways, with Hydro-Man heading out of town.

Sandman was so shaken that he went straight for years (until the Wizard brainwashed him into returning to crime), while Hydro-Man did most of his criminal work in groups from that point on, perhaps seeking safety in numbers. Both alone and as a member of teams like the Sinister Syndicate, the Frightful Four and the Assembly of Evil.

Bench fought a wide array of foes such as Silver Sable, Sandman, the Fantastic Four, Cloak & Dagger, the Avengers, the New Warriors, Thunderstrike, the Thunderbolts, Gambit and Black Panther, but most often clashed with Spider-Man. Hydro-Man was one of many super-criminals employed by corrupt billionaire Justin Hammer for a time, and later served in the Masters of Evil assembled by Hammer's daughter Justine, alias the Crimson Cowl; however, after Justine's arrest and the apparent death of Justin, Hammer Industries phased out its criminal enterprises and Bench, along with fellow employee the Shocker, was laid off. The Shocker and Hydro-Man then teamed up for one last crime, seeking enough money to retire, but Hydro-Man's thirst for revenge against Spider-Man led to their defeat. Trying and failing to go straight, Bench was recruited back into the Wizard's Frightful Four and, more recently, the Sinister Twelve.

Previous the events of the Spider-Island, Morris tried to rob a jewelry and defeted the Young Allies, then Spider-Man arrived and using a special spider-tracer turned Hydro-Man into ice, and left him into custody of the Young Allies until the authorities appeared.
Superhero Class