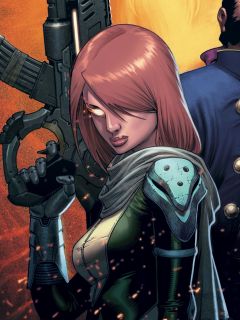 Hope was the first new mutant born since the M-Day. The moment she was born, Cerebra blew up and the town was soon attacked by the Purifiers, who had used information given from the time-traveling Sentinel Nimrod warning them of her arrival. Although all the children in town were murdered by the Purifiers, Cable managed to save her. According to him, the baby was the messiah supposed to save both mutant and humankind. However, according to the Purifiers and Bishop, she would become the equivalent to the Antichrist and kill a million humans in six minutes, turning humanity against mutants once again, thus leading into a new era of mutant persecution, the very time line in which Bishop was born.

The baby was later kidnapped by the Marauders and delivered to Mister Sinister, actually Mystique in disguise. She took the baby and made her touch the comatose Rogue. Gambit quickly took her away from Mystique, believing that she just killed her but he was amazed to see that the baby was alright and that it even cured Rogue. After a huge battle between the Marauders, X-Men, and Predator X, Cyclops decided that the baby would be better off with Cable, and allowed his son to take her to the future. However, an adamant Bishop decided to track Cable and the baby in order to finally kill her and prevent his future from happening.

Upon jumping into the future, Cable took her to the secluded safe haven of New Liberty in the future, where Cable married a fellow civilian named Hope, who became like a mother to the mutant baby. Years passed, since his last battle with Bishop damaged his time machine, Cable could only jump forward in time. She was now seven years old. But then New Liberty was invaded by humanoid insects who called themselves the United States Army. Cable fought them and left New Liberty with his wife and Hope in order to make sure New Liberty didn't fall. After spending months in the wasteland, the family was attacked by the president of the insects, whom Hope managed to save her family from by stabbing the insect in his weak spot, since she had been watching Cable fight. Cable questioned the president where he found out that Bishop, in order to find Hope in the future, had destroyed all the continents in the world, except North America, in order to easily find her and kill her. Cable killed the president, and the family moved on. The family encountered a settlement, but were met with resistance. Cable took care of them easily, but not fast enough, as her mother was shot and died in Cable's arms while she watched. Hope saw Cable bury her mother and departed with him. After arriving at a church, the pastor asked the name of the child. In that moment, Cable decided to name her Hope Summers, in honor of her adoptive mother.

Hope became the center of conflict between Cable, Stryfe, and X-Force. Hope was kidnapped by Stryfe who was working with Bishop. She watched as Stryfe tortured Warpath until Cable, Wolverine, and Elixir came to their rescue. In the following fight she survived along with the rest of the X-Force and Cable with Bishop losing an eye to Wolverine and having his time travel device damaged. When Cable and Hope were forced to time travel again, Hope resisted because she wanted to stay with X-23 and Elixir, with whom she had bonded during the War. That caused her to kick Cable in mid jump stranding herself and Cable two years apart from each other.

Hope fled the rubble of Stryfe's Celestial City and befriended Emil Spence, the descendant of Stryfe's warriors, Stryfetroopers. Hope survived for two years, with the help of Emil, until rejoining Cable and fleeing Earth on the second last spaceship on the planet, the Ensabahnur I, which Cable commandeered posing as Stryfe. Hope was devastated at being forced to leave Emil, the boy she loved.

At some point during their journey Hope accidentally betrayed Cable and he was imprisoned. Bishop and Emil eventually caught up to Cable and Hope, Emil under the impression that Cable had kidnapped Hope and Bishop was her true father, Bishop was also armed with a thermo-nuclear device which he planned to activate as soon as he saw Hope. While Bishop and Emil raided the Ensahabnur I, Emil and Hope were reunited and Hope explained to Emil that Bishop was in fact trying to kill her.

During Bishop's invasion the Brood, attracted to Hope's power, attacked both ships, distracting Bishop from Hope. While Cable and Bishop both fought the Brood, Hope and Emil made their way to the ship's two terraforming pods, which would facilitate their escape. Emil placed Hope in the pod against her will as she refused to leave Cable. As Emil was preparing the second pod Cable appeared and Emil gave the second pod to Cable, sacrificing his own life.

After Cable and Hope had left Emil obtained Bishops thermo-nuclear weapon, detonating moments before he could be attacked by a Sleazoid. However, Bishop escaped by allowing himself to be absorbed by an Acanti, and two years later he had tracked Hope and Cable in cryo-sleep within their terraforming pods.

Hope and Cable survived the brutal crash-landing back onto the dying Earth. Hope and Cable make encampment in ruins infest with mutant rats. Soon Hope made the decision that she was ready to go home and join the X-Men. However, the only fully functioning time machine in Bishop's robotic arm, and Bishop is still trapped inside a dying Acanti. Cable blows up the Acanti corpse, awakes Bishop and narrowly escapes with Hope into the past, but not before Bishop fires a bullet point blank at Hope's head. Fortunately, Hope mutant powers manifested and she used Cable's telekinesis to stop the bullet in midair.

The cobbled together time machine turned out to be somewhat faulty, making it difficult to timesliding to a specific date. Also, the remnants of Bishop time device are triggered with each jump which allowed him to follow Cable and anywhere in time. A violent chase ensues across numerous time periods on Manhattan Island including Revolutionary War and ruins of the apocalyptic future. Suddenly, they arrive in 2044 where Cable and Hope were briefly reunited with Sophie Pettit. However, Bishop also meets some former comrades, Turnpike Authority, and begins chasing Hope with his new reinforcements. Unfortunately, during the chase, the car carrying Cable, Hope and Sophie crashed in Central Park. Cable was able to save Hope and time-jump, but Sophie died. Hope and Cable land in Central Park of 1933 and waste no time in moving before Bishop follows. Cable and Hope make several more rapid time jumps, each time over shooting their true destination, but each time getting closer. Bishop finally reach them and is almost successful in killing Hope until Cable activated the time device in his arm to send Bishop to the year 6700 AD. Finally free of their pursuer, Hope and Cable borrow a car and drive to the X-Mansion and prepare for their final jump into the present.

Cable and Hope arrived at in the present at the ruins of the Xavier Institute. While searching the rubble for clues on the X-Men's current whereabouts, a team of Smiley Faces attacked them. They were able to escape, but now Bastion knew about the Mutant Messiah's return. Bastion began tracking the pair to using Cable's T.O. virus as a beacon. Hodge's Smiley-Faces and Stryker's Purifiers both continued to pursue the pair, but the X-Men was also been alert to Hope and Cable's return via the Stepford Cuckoos and Cerebra.

A select team of X-Men was able to stop both the Purifiers and Smiley Faces, and catch up to Cable and Hope. Once the X-Men understood how Bastion was tracking Cable they broke into two team: Nightcrawler, Rogue and Hope teleporting back to Utopia and Wolverine, Cable and the remainder of Alpha Team acting as decoys. Bastion quickly uncovered the deception and attempted to kill Hope personally, but he is confronted by Rogue and then damaged when Nightcrawler sacrifices himself to save Hope; teleporting in one leap for Las Vegas to Utopia.

After Hope arrived on Utopia, Bastion launched the next phase of his plan. During the months leading up to Hope's return a large energy dome was built over the Bay Area to cut off the X-Men from escape or help. Once the dome was activated, Bastion opened a dimensional portal from his home reality to allow in more Nimrod-Series Sentinels. Like the original Nimrod, these Sentinels are able to detect, analyze and adapted to mutant powers. They are also self-repairing. The X-Men were barely able to subdue them, and several X-Men sustained severe injuries. Every five minutes a wave of five new Nimrod Sentinels continued to appear through the portal. Only by sending X-Force, Cable and Cypher on a one-way mission into the future to reprogram and destroy the Nimrod Master Molds were the X-Men successful to defeating them. However, Cable sacrificed himself to get the other members of X-Force home safely.

Once the dimensional portal was closed, Bastion decided it was time to confront Hope personally. He converted both Graydon Creed and Stephen Lang into robotic forms to battle the X-Men on the Golden Gate Bridge. Hope, grieving profusely at the death of her father, allowed her sorrow to turn into purposeful rage. Her mutant powers manifesting once more, Hope was able to draw on the mutant powers of the X-Men around her and single-handedly destroyed Bastion, Lang and Creed.

After the battle, Hope laid down cradled in the remains of Cable's techno-organic arm and fell for nearly 30 hours from shear exhaustion.

Once the dust had settled after the final Bastion, Hope, accompanied by Rogue and Dr. Nemesis, was set to the Baxter Building in New York City to be thoroughly examined by Mr. Fantastic. After the examination, Richards concluded that Hope showed no major signs damage from time-traveling. He did recommend she have some dental work done and begin her vaccination regiment. He also said what would be most helpful is a biological family history.

When Hope returned to Utopia, she was confronted by Cyclops. They agreed to not let Cable's death stand between them. Cyclops began to talk about Hope and a small group of X-Men visiting the five newly manifested mutants, but Hope refused to go. Cyclops realized he was expecting too much from Hope, and per her request promised to send her and a few X-Men to Cooperstown, Alaska to search for clues of her biological family.

Hope with Rogue, Cypher and Dr. Nemesis goes to Alaska, and discovers that her mother's name was Louise Spalding. She comes to her grave and meets her own grandmother, who tells Hope about Louise.