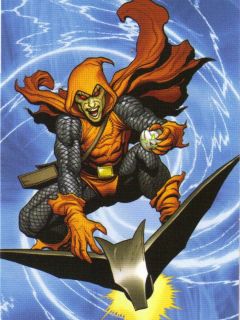 Roderick Kingsley was a successful fashion designer and millionaire who had built his empire through underworld ties and unethical practices. One of his criminal associates, George Hill, had stumbled upon one of the secret lairs of the original Green Goblin. He relayed this information to Kingsley, who killed him to ensure the secret would remain hidden. Reading through Norman Osborn's journals and examining the various "goblin" paraphenalia and weaponry, Kingsley found himself enthralled with the idea of becoming a costumed criminal. Therefore he forged a new identity, with an altered costume as the Hobgoblin.

Using information he acquired from journals left behind by Norman Osborn, Kingsley intended to blackmail several key figures including J.Jonah Jameson and Osborn's son Harry. Inevitably, this drew him into conflict with Spider-Man, who Kingsley saw as only a nuisance and had only planned to deal with him in afterthought. After being beaten soundly by the web-slinger several times, Kingsley became obsessed with reproducing Osborn's orginal strength enhancing formula so he could deal with Spider-Man more effectively. Not wanting to suffer the insanity that plagued Norman Osborn as a result of exposure to formula, Kingsley decided to test it on a small time thug named Arnold "Lefty" Donovan. After exposing him to the formula, Kingsley had Donovan attack Spider-Man in the guise of the Hobgoblin. Kingsley monitored Donovan's vitals from afar, checking for anomalies. Spider-man defeated Donovan and unmasked him, but before he could compromise Kingsley's identity, he remote-controlled the goblin glider to crash, killing him.

Convinced that the test was a success, Kingsley immersed himself in the new formula and emerged with strength that suprassed even the original Green Goblin's. Sometime later Kingsley discovered that the reporter Ned Leeds had followed him to his lair and learned of his secret identity. Through hypnosis, Kingsley was able to brainwash Leeds into becoming a new Hobgoblin that Kingsley could manipulate from the shadows. In particular, as stand in for negotions with The Rose (Richard Fisk) in an elaborate plot to bring the Kingpin's empire down. To further protect his identity and deflect the attention of his enemies, Kingsley at one point framed Flash Thompson as the Hobgoblin. Thompson was arrested, only to be freed by Jack O' Lantern (Jason Philip Macendale). Macendale learned that Thompson was not the real Hobgoblin, which infuriated him. Thompson was subsequently exonerated.

Eventually, Hobgoblin and the Rose had a falling out, with the latter enlisting the Jack O'Lantern to dispatch the former. Hobgoblin defeated him, forcing Macendale to pursue an alternative method of destroying his enemy. As Kingsley had gone to great pains to convince everyone that Ned Leeds was the real Hobgoblin, it was Leeds that ultimately paid the price. Macendale had the mercenary called the Foreigner arrange an assasination of Leeds in his hotel room while on assignment overseas with Peter Parker. Kingpin then told Parker's alter-ego, Spider-Man that Leeds was the Hobgoblin, illustrating this fact with photos of the assasination, showing Leeds in full Hobgoblin costume. Kingsley, satisfied that his identity had been protected and that the underworld believed the Hobgoblin dead, retired to Belize.

Macendale then took the opportunity to take up the mantle of what was then thought to be the "deceased" Hobgoblin. After his tenure as the Hobgoblin, and corruption into a demonic form (resulting in the emergence of the Demogoblin), Macendale was ultimately arrested. During his trial Macendale publicly revealed that Ned Leeds was the "original" Hobgoblin - even though no one, including Macendale, at that point knew that was not true at all.

The true Hobgoblin, Kingsley returned from retirement, his first act being to kill Macendale whom he deemed unworthy of his title. He then kidnapped Betty Brant as part of a trap for Spider-Man. However, during the battle, Kingsley's brother Daniel was captured and Kingsley was unmasked. Finally, the true and original Hobgoblin was revealed and Ned Leeds' name was cleared.

When Norman Osborn was revealed to be alive and well, the imprisoned Kingsley became furious at Osborn's denial of being the Green Goblin. He claimed the existence of a lost journal of Osborn's that proved that he was indeed the Green Goblin. Osborn had Kingsley broken out of prison and provided him with new Hobgoblin equipment while a mysterious new Green Goblin (a genetic construct created by Osborn) kidnapped Daniel Kingsley, the only person who supposedly knew where the last journal was. After capturing both Daniel and Spider-Man, the two Goblins returned to Osborn who revealed the truth...that he knew there was no other journal and he had bought Kingsley's empire out from under him. Infuriated, Hobgoblin attacked and a climatic battle between both Goblins and Osborn ensued. Spider-Man was able to take Daniel to safety as the entire building began to collapse and burn down. All three villians escaped, and although Osborn believed himself to be victorious, Kingsley had safely stowed away several millions of dollars in various overseas accounts. He then quietly retired to the Carribean.