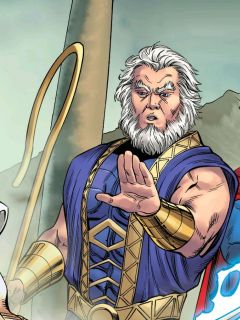 These New Gods have evolved due to their close proximity to the Source, a primeaval energy, believed to be one of the ultimate foundations of the Universal Expression of Energy, along with their superior technology, into beings of genetic stability and evolutionary perfection. The denizens of New Genesis are stronger, faster, and smarter than homo sapiens, despite their resemblance to the same.

He is resistant to blunt trauma like punches, kicks, and blows from weapons like bats and maces, though not completely immune; unless the blows a dealt by a being with similar or greater strength than Highfather, there just isn't a chance of injury. However, his invulnerability does not extend to bullets, laser-blasts, or other piercing/slicing weapons - his invulnerability is more akin to that of an Amazon, rather than a Kryptonian.

While Highfather Izaya's strength as a New God is naturally greater than that of a human man of his (approximate) build and stature who engages in regular intensive exercise.

Highfather Izaya's stamina and endurance is nothing short of amazing. Highfather Izaya is able to manage his stamina on a certain amount of rest and sustenance (more than minimal) so that it seems he is able to constantly function, though this is not entirely the case. Tied directly to his strength and invulnerability, even his immunity to a certain extent, Highfather Izaya can actually function at peak efficiency for almost 48 hours before needing to eat and rest off the stress.

Izaya has the ability to commune with the Source and gain an understanding of it's wisdom and motivations. He is a living conduit of the source of guidance to the New gods of New Genesis.