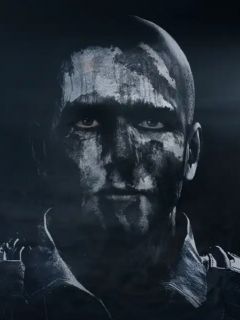 Lieutenant David Walker (codenamed: Hesh) is the non-playable deuteragonist of Call of Duty: Ghosts. He is Logan's older brother and Elias' son, as well as Riley's caretaker. He joined up with U.S. special forces alongside his brother and father following the ODIN strikes in California to serve in the Federation War.

David Walker was born in 1999 and two years after, his brother Logan was born. Afterwards, their mother passed away, leaving Elias to look after David and Logan. He and his brother were highly encouraged to join the military and trained by their father. In 2017, as soon he turned 18, he immediately joined the military. He chose the nickname "Hesh" later in his youth, which later became his callsign in his military career. He was raised in San Diego, California with his brother and his father.

On July 10, 2017, Elias tells Hesh and Logan an old war legend in which a group of sixty Tier One operators defend a hospital from five hundred enemy soldiers during the Tel Aviv War. After suffering catastrophic losses in a single night, the last remaining operators split: one evacuated the hospital, and the other fourteen fought against enemy forces viciously, using their weapons until they ran dry, their knives until they ran dull, and eventually their fists. After the last enemy escaped, he told the battle they fought against the legendary force he called "Ghosts". Finishing the story, Hesh doubts the story while Elias knows it is, recounting his experiences during the battle. Returning home, ODIN strikes San Diego, and Hesh and Logan barely survive the kinetic rod strike. A flying oil truck explodes and knocks Logan unconscious. Hesh and Elias carry an injured Logan to the truck and Elias drives away from San Diego. Hesh and Logan view the destruction as the ODIN Space Station strikes San Diego and the rest of the United States, breaking the truce between the United States and the Federation.

Years after escaping from San Diego, the war against the Federation began to increase. Elias eventually rejoined the army and became leader of a group of soldiers as Hesh and Logan found themselves forced to join the Army too.

In the ten years following the ODIN strikes, the United States fights off the oncoming Federation forces to a bloody stalemate and stops them at the Liberty Wall, a massive concrete wall separating the United States from Federation-occupied Mexico to the south. Hesh and Logan go outside the Wall into No Man's Land to perform a recon sweep of the Wall in Fort Santa Monica after Dallas is overrun by the Federation. While performing recon on the surrounding area, they defend the Wall against a platoon of Federation soldiers and a Mi-24 Hind. Upon arriving in Fort Santa Monica, they meet Elias commanding the remnants of the military as he gives them a reconnaissance mission in No Man's Land, the wasteland surrounding San Diego following the ODIN strikes, to regroup with a recon unit and investigate the Federation presence in the area.

Hesh, Logan and Riley approach No Man's Land as they tail Federation patrols deeper into the territory. They arrive at their old house, now half-destroyed and overgrown. Hesh finds their father's old MTS-255 within the house. As they leave, they see the crater from the ODIN strike years ago and carefully navigate the disintegrating environment. Logan controls Riley via his tablet and guides Riley to kill several patrols and Hesh assists in taking out several soldiers as they clear the overgrown neighborhood. They eventually discover the crash site of an ODIN satellite and fight several Federation squads before continuing on deeper behind enemy lines. After sneaking past a Federation patrol in a tunnel, Logan guides Riley through an overgrown highway, covered in wrecked vehicles and Federation soldiers. Riley quietly takes down several patrols and eventually finds a man named Rorke interrogating an American soldier named Ajax. Rorke sends him away to be interrogated by the Federation. Riley regroups with Hesh and Logan and continue through the forest before encountering a pack of wolves. They are nearly killed by the wolves before Captain Thomas Merrick and Sergeant Keegan Russ arrive and rescue them. Hesh recognizes them as Ghosts and they confirm the identity of Ajax. The two teams fight a squad of Federation soldiers amidst the wrecked pier and continue towards Ajax, who is being held at Greenway Park Stadium several miles away.

Returning to base, the Federation attacks full-scale in Operation Homecoming. With both soldiers Hesh and Logan participating on the front line of that battle in the ongoing war. The team serves with distinction on the front line eliminating numerous enemy fighters as well as destroying enemy armor and air support. Logan is injured by a Federation soldier but Hesh saves him. Ghost and Keegan then fast-rope from an overhead helicopter, and grab Hesh and Logan for extraction. Hesh is despondent on finding Elias, upon which a masked Ghost reveals himself to be their father Elias. Elias tells them they are now members of the Ghosts, passing their multiple tests in the war but still have much to learn about survival on the battlefield. He then tells them about Rorke: how he was once Captain of Ghosts but was M.I.A. when Elias let Rorke go in Caracas during the assassination of Diego Almagro.

Elias sends Keegan, Hesh and Logan to Federation Capital in Caracas, Venezuela to find leads on Rorke. Zip-lining into the building and infiltrating it, while neutralizing hostiles, they acquire the High-Value-Target, and interrogate him for Rorke's location, Rorke appears on a screen, taunting that Elias sent them to their death. Rorke had anticipated this event, and set up explosives around the skyscraper. Collapsing it, the Ghost squad barely escape with parachutes.

In "Birds of Prey", Merrick, Keegan, Hesh, and Logan lead an attack in the Gulf of Mexico on the oil fields, capturing Rorke. During his interrogation in "The Hunted", a Federation plane destroys their plane and helps Rorke escapes. Upon landing, Hesh is separated in the Yucatan with Merrick, and Elias with Keegan, and regroups with Logan. The special forces team escapes the trap and evade enemy soldiers and then are rescued by Neptune by the river.

Elias then orders the Ghosts to attack the Andes Patagonia, an oil station in Antarctica, to cripple the Federation's oil supply and lure the Federation Seventh Fleet away from the factory at Rio.

After this, the team infiltrates a factory in Rio de Janeiro in "End of the Line", where they learn that the Federation reverse-engineered ODIN and has created many smaller versions of it. Calling in an air strike on the facility, Hesh and the group escape.

In Sin City, Elias, Merrick, Hesh and Logan are ambushed and smoked with gas, captured, and taken to Rorke. Rorke kills Elias in front of Logan and Hesh after Logan tries to kill Rorke. Awaiting his execution, the three are saved by Keegan, who manages to snipe the would-be executors. During their escape, Merrick breaks a rib, and Riley is injured from a shot through his leg. Logan is told by Hesh to carry Riley while waiting for extraction from a Blackhawk (Prince-Two-Zero).

In "All or Nothing", Captain Merrick makes Hesh field commander of the mission while he takes a more administrative role in command of the Ghosts. Merrick then gives Elias' mask to Logan. Three days later, Hesh and Logan protect the Ship from a Federation assault consisting of helicopters, boats, and numerous soldiers. Hesh then tells Logan to use the Osprey to destroy the helicopters. While the are moving to the other side of the deck, it collapses. Hesh and Logan then save Cpl. Weaver from certain execution. Hesh orders Logan to use Sparrow Missiles to destroy the helicopters. As the pair make their way to the flight deck, missiles hit the top hanger of the deck and the ship starts to sink. Hesh and Logan dodge debris as they run to a chopper for extraction.

In "Severed Ties", Hesh and Logan come to hack the satellite as Badger Company to destroy the Satellite Array to let Astronauts Icarus team to Space Station LOKI. Hesh and Logan come in to the base with Logan on the Minigun, coming in fighting their way in. Hesh and Logan breach with Hesh uses a fire extinguisher on the unit soldiers. Hesh hacks the computer as Logan hits the button to launch the warheads. Hesh and Logan have eight minutes to get out before impact, the two brothers fight their way to the Federation Train and make in on board.

In "The Ghost Killer", Hesh and Logan take down two Federation soldiers, Hesh tells a soldier to "tell Rorke we're coming for him", Rorke appears on the screen and taunts him. Hesh, angry, smashes the screen and replies, "Let's finish this." Hesh opens the train door and witness Loki's rods raining down fire upon the Federation. Hesh and Logan engage soldiers and helicopters and reach to the engine room, before breaching, Hesh contacts Merrick orders him to send a rod down onto the train if he hears the word "Checkmate". While breaching, a Fed hits the rocket and explodes causing Hesh and Logan to slide to Rorke and his back up. Logan kills two Federation soldiers as Hesh kills the last one. However, Rorke grabs Logan as hostage as Hesh pulls out his P226. Rorke orders him to put down his gun and shoots him in the arm. Keeping Hesh at point blank, Hesh says "Checkmate", giving the sign, disrupting Rorke with the rods. As Hesh says "It's over", the train crashes as Logan and Hesh are knocked unconscious. Hesh awakes and finds Rorke grabbing his .44 Magnum to shoot Logan, Hesh grabs a fire extinguisher and hits Rorke in the head, making Rorke still fire but miss. Hesh and Rorke engage in hand-to-hand combat but Rorke gets the upper hand and pins him to the ground and tries to stab Hesh with his knife. Hesh orders Logan to shoot Rorke, the Magnum being empty. Hesh punches Rorke and gives Logan ammo for the magnum, Hesh holds on to Rorke and orders Logan to shoot them. Logan does but the bullet go though both of them, the bullet went though the window and cracks, flooding the train. Logan saves Hesh and bring him to surface, carrying him to a rock to sustain his wound. Hesh informs Merrick that they survived and Rorke is KIA. Hesh tells Logan that he is proud and the brothers watch the explosions over the horizon. Rorke, surviving his wounds, suddenly appears and Logan tries to stab him, but Rorke breaks Logan's arm and kicks Hesh in the face. Rorke then drags Logan away to try and turn him into his weapon to destroy the Ghosts; Hesh can do nothing but scream for his brother as Logan is taken away from him.
Superhero Class