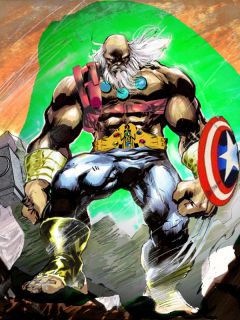 On Earth-237 an irish born scientist who moved to japan in hopes to research immortality and biodiversity through quantum physics and quantum mechanics, invents a serum and machine that when combined could instantly alter the genetic code and physical structure of the subject using the power of the mind. He uses it on himself and turns himself into one of his all time favorite comic heros one that by other standards couldn't come into existence as easily as some others. After some time being the hero the japanese quoted as "Atarashi Kami" Which meant "A new god" since the pop culture in japan was such that they literally worshipped the real life versions of their favorite heros jump right off the pages into reality. But, after some time set in the future Where he kills every villain and evil after the mass death of many super heros he is then chosen by the One Above All to be his herald and Avenge Across The omniverse. He then truly becomes a literal "new god" After seeing how Atarashi in every future time survived over and over again either evil or good with few remaining to challenge his might. he chose one who was good, He gave this god man the ability to wield all the best and most powerful relics and powers of his time. He was given an aura of cosmic radiation the most pure and powerful there is from a place in the beginning of all things that pulled his green form out of him giving him a more pleasing and familiar presence.

This aura acts as a diviner between him and one above all which can kill or destroy anything on contact or not. He was also imbued with a new form of nano vibranium and adamantium which coats his entire skeletal structure and gives him claws or spikes that can erupt anywhere on his body. He was given the power of the and the all father odin through a brand new mjolnir. And Sergeant american's shield which is made from an enchanted uru that protects and shields from any and all cosmic or god entity attacks. He can also use the infinity belt. Lastly a shoulder harness from Titanium mans finest creation the "deity Destroyer" armor which works like his Epidermal Symbiote armor to form around any part of his body. He usually forms it around his right arm and fist that wields mjolnir.

He has been given all the knowledge of one above all (God to all) as well as most of his power as he stands as the physical incarnation. He is destined to go anywhere at anytime to stop evil and defeat foes no matter who or what they are. nothing can defeat him he is second only to the one above all and therefore cannot be beat. He is a herald and like his power was bestowed upon him it can also be taken away only by the one above all.