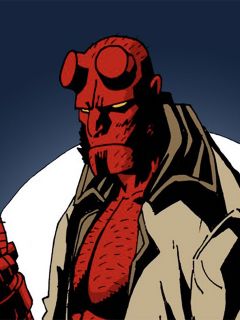 A pistol given to Hellboy by the ghost of Harry Middleton. It has short recoil and can hit intangible enemies with its custom bullets.

The Good Samaritan was given to Hellboy by his friend, the Torch of Liberty. The gun was made in Massachusetts. It's made up of different metals like silver, metal from old horseshoes, cannonballs, and melted metals from sacred amulets. Upon melting the sacred amulets, incantations were said. Even the handle of the gun was made from a portion of the True Cross. Hellboy called the gun The Good Samaritan because he would put monsters out of their misery. The Good Samaritan is like a miniature hand cannon. It weighs 6lbs which could also be used as a hammer. It is a .20 mm mega-pistol that can blow huge holes in buildings. The gun can hold up to four bullets making it the ultimate weapon. Upon impact, a glass chamber within the bullet casing launches numerous things. These things can include holy water, white oak or anything else that's needed to be used to defeat the monster at hand. On the side of the gun, Hellboy embedded a B.R.P.D symbol and after Professor Broom had given Hellboy the double-faced medallion, Hellboy split the medallion in half and placed a face of it on both sides of the gun handle.

An over-sized six-round gun that shoots small rockets that can cause small-sized explosions. Because of how big it is, Anung sometimes carries it with both hands. Though in the movie, it fires 2 small rockets at the same time. The rounds of it are small rockets with the word 'Suck On It'.

A very powerful grenade strong enough to blow the top off a mountain.

The Right Hand of Doom

Another weapon is The Right Hand of Doom (his large rock-like arm). The hand is virtually indestructible and as such Hellboy often uses it as a method for defense as well as offense. It is said to be the key to Armageddon. The hand has shown mystical capabilities such as being able to hurt the hero Ghost. The full extent of its powers is yet to be seen, but it is implied that it holds tremendous power. The hand is not without its disadvantages however as Hellboy can't use the Good Samaritan in his right hand. He's also forced to be left-handed as his hand can be too clumsy to do certain tasks.

Hellboy is known for using various weapons and mystical items in his fight against evil. His most two notable items are his The Good Samaritan (an extremely large gun known for its brute strength and mystical background) and The Right Hand of Doom. Hellboy also used different other charms and gadgets when the situation calls for it. Hellboy also carries a golden cross that is attached to a chain that wraps around his waist. The chain was given to him by his Earth father Professor Broom which always reminds Hellboy that he makes himself be who he wants to be and that he is good. He also makes use of a Smith Wesson M29, but only very rarely.

An enchanted necklace used for fighting demonic animals off easily. It can also be used to deal more damage or take less damage.

A small plant that drives away ectoplasm when lit on fire.

A horseshoe made to burn or weed out fairies weak to iron.

A bell that supposedly protects Hellboy from evil and can revive him if he dies.

A comb that causes several plants, enough to create an entire forest, to burst from underneath and ensnare the enemy when dropped on the ground.

A handkerchief that turns into a massive flood, capable of moving several boulders, when dropped on the ground.

No equipment or weapons connected to Hellboy
Superhero Class