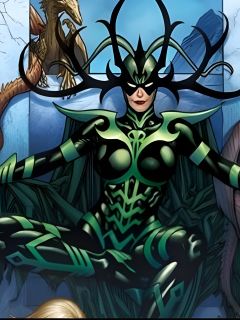 Hela possesses the conventional superhuman abilities of an Asgardian woman, although in fact her parents may have been members of the race of giants of Jotunheim, as well as certain special abilities that pertain to her role as a goddess of death.

Hela possesses vast superhuman strength considerably greater than most Asgardians. She has proven capable of standing toe-to-toe with Thor. Hence, she is capable of lifting well in excess of 100 tons.

Hela is capable of running and moving at speeds much greater than even the finest human athlete.

Hela's body produces considerably less fatigue toxins than the bodies of human beings, or most other Asgardians for that matter, during physical activity. As a result, Hela possesses almost limitless physical stamina.

The skin, muscle, and bone tissues of Hela's body are about three times as dense as the same tissue in the body of a human. This contributes, somewhat, to Hela's superhuman strength and weight.

Hela's body is considerably more resistant to physical injury than the bodies of human beings, and most other Asgardians. Hela is capable of withstanding great impact forces, temperature and pressure extremes, high caliber bullets, and powerful energy blasts without sustaining injury.

Despite her body's high resistance to injury, it is possible to injure her. However, Hela's body is capable of healing itself with high levels of superhuman speed and efficiency. The extent of Hela's healing abilities is considerably beyond that the the vast majority of Asgardians.

Hela, like all Asgardians, is not completely immune to aging but she does age at a rate much slower than that of a human being. She is also immune to all known earthly diseases and infections.

Hela is able to travel about in her astral form, possessing the same powers of death as her physical form has. Because of her Asgardian metabolism, she does not have any limitation on the amount of time she can spend out of her physical form, unlike mortal astral projectionists.

Hela is capable of manipulating great quantities of Asgardian magic for numerous purposes, such as limitless astral projection, firing deadly bolts of energy from her hands that could kill an immortal, levitation, time-travel and the creation of illusions. She is even capable of channeling the energy through her hand and use them to strike a powerful blow that can rend even the strongest Asgardian flesh. She refers to this as the "Hand of Glory".[citation needed]

Control Over Life and Death

As the Asgardian Goddess of Death, Hela holds the power of life and death over the gods of Asgard. Death for an Asgardian is somewhat different from death for an Earth human being. In both cases, the corporeal body ceases all functions and activities, but whereas mortal spirits flee the physical form at the moment of death, the spirits of gods remain in their bodies until the death goddess draws them out and dispatches them to her realms. These spirits (or astral selves) remain integral for eternity and reside, apparently forever, in the other-dimensional realms of Hel and Niflheim, where they take on a quasi-physical existence, under Hela's control. The souls of those who die heroically in battle remain within their bodies and are accompanied by Odin's Valkyries into Valhalla, where the deceased heroes lead a new physical existence. These dead heroes are known as the Einherjar. Hela too accompanies these heroes on their journey to Valhalla, but she has no right to govern them. Although Hela is usually content to wait until an Asgardian is on the verge of succumbing to fatal wounds before she touches him or her and draws the spirit from his or her body, she can also kill perfectly healthy Asgardians with her touch if she chooses. Although Hela's touch of death is effective even when she touches someone with her gloved hand, she must contact that person's bare skin for him or her to die. However, Hela can also project mystic bolts that will cause their target to age or die, even if they strike a portion of the target's body that is covered by clothing. While Hela's touch is also fatal to mortals, she does not generally leave the dimension of Asgard or have much traffic with human lives. The souls of immortals are her province, nor those of mortals.

Thanks to the Allspeak, she can communicate in all of the languages of the Nine Realms, Earth's dialects, and various alien languages.

Although she rarely does so, Hela is a formidable hand to hand combatant, as well as having great proficiency with swordsmanship. She is particularly skillful at using her powers in combat situations.