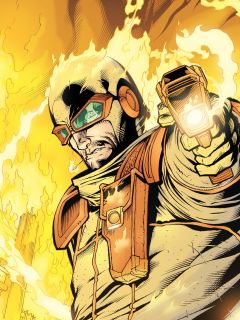 Born on a farm outside Central City, Mick Rory became fascinated with fire as a child. This fascination turned into an obsession and one night, he set his family's home ablaze. His obsession was so great, that he simply watched the flames engulf his house, instead of running to get help. His entire family died in the fire.

After this event, Rory went to live with his uncle. His pyromania continued and he was forced to run away after locking a schoolmate in his house and setting it on fire because the boy locked Rory in a meat locker during a field trip as a prank. He took a job as a fire eater with a traveling circus. This did not last long either, as he ended up setting the circus on fire.

It was these events that made him desperate to fight his fire obsession and after seeing the Rogues in action in Central City, he decided to use his mania to become a villain. He created a protective costume made of asbestos (this was back before the dangers of asbestos were known), built a gun-sized flamethrower and became Heat Wave. As he was committing crimes in Central City, it was inevitable that he'd run into the Flash, which he did quite regularly. Subsequently, he also ended up in jail quite regularly. He also became a rival of Captain Cold, due to his aversion to cold temperatures. It was Captain Cold who introduced Heat Wave to The Rogues.

Eventually, Mick went straight, due largely to the manipulations of the Top. He took a job as a firefighting consultant, using his vast knowledge on fires and heat. He also became good friends with Barry Allen, who he had discovered was The Flash years before. All good things must come to an end though, and Rory succumbed to an offer by Abra Kadabra of gaining respect and infamy in the world. He and four other members of the Rogues sacrificed themselves, quite unwittingly, to unleash the demon Neron, setting off the events of Underworld Unleashed.

Later, Neron returned the soulless bodies of the five to Earth, in a plan to force Flash into a deal. The five Rogues each possessed incredible powers and wreaked havoc, death and destruction before Neron was forced by Flash to halt their actions and return their souls to their bodies.

Heat Wave would only briefly return to his criminal ways before abandoning them to study with Zhutanian monks. Afterwards, he worked for Project Cadmus as a backup agent, but eventually quit that too and moved to the Quad Cities, Illinois area. He eventually got a job at the FBI, along with other reformed members of Rogues. This was a spectacular failure and Rory became a villain once again after the Top arrived and undid the mental program that had kept him reformed.

One Year Later, after being caught by the police, he and several more of the Rogues were approached by speedster Inertia with a plan to kill Bart Allen, the current Flash. Caught up in the moment, Heat Wave, Weather Wizard, and Captain Cold shot Bart to death with their respective weapons after he foiled Inertia's plan, and are now on the run. They expressed guilt immediately after the murder. He was one of the first villains to be captured during Salvation Run.

Heat Wave was seen joining Libra's Secret Society of Super Villains. Unfortunately, he and the other Rogues' reject Libra's offer. Before they can retire, they hear that Inertia (now Kid Zoom) had escaped. The Rogues' confront Kid Zoom and ultimately kill him because that they were used and to overcome the guilt of Bart's death. Human Flame sought out Heat Wave hoping to purchase one of his signature flamethrower guns. Heat Wave refuses, denouncing Human Flame as "pathetic" and beating him harshly.

When the actions of the Reverse Flash temporarily drastically altered the timeline, Rory suffered serious nerve damage caused by burns received while fighting Cyborg. Incarcerated for his crimes, he formed a new Legion of Doom consisting of various fellow inmates including the Thinker, Lock-Up and Sportsmaster, along with Plastic Man, who was smuggled into the prison inside the Cluemaster's stomach. The group escaped prison and sought revenge on Cyborg, who had been responsible for capturing most of them, but when Plastic Man realized that Rory's plan involved murdering the entire population of Detroit he turned on him, and Rory was forced to melt him. Rory eventually ordered his team to stay back while he fought Cyborg one-on-one, but he was defeated and jailed again, finally being confronted in his cell by a vengeful, reconstituted Plastic Man, who seemed intent on killing him.
Superhero Class