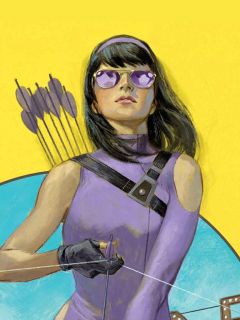 Kate Bishop grew up as the youngest daughter of a rich Manhattanite family. Her father was emotionally distant and busy with work while her mother died while she was still young. Though Kate was close to her older sister, Susan, she developed a very independent, blunt, and stubborn personality.

A few months prior to her sister's wedding, Kate was assaulted while walking in Central Park. The event initially left Kate traumatized and isolated. However, the ordeal eventually motivated her to learn several forms of combat fighting and self-defense. She quickly became proficient in swordplay, archery, and martial arts. She also met with a therapist during this time to work through some of her issues.

After the attack, at the hospital, Kate was approached by Cassie Lang, daughter of the Avengers' Ant-Man. Together the girls tracked down the Young Avengers to the ruins of the Avengers Mansion, where the girls confronted the the team and invited themselves on as members. Not long afterwards, the Mansion was attacked by Kang the Conqueror. To join the battle, Kate donned gear from the Mansion including Mockingbird's Battle Staves and mask, Swordsman's Sword, Black Widow's utility belt, and Hawkeye's Bow. After defeating Kang and saving the world, Kate and Cassie remained on as permanent members.

Captain America and Iron Man ordered the team to disband and refused to train them. However, Kate used some of her family's money and connections to procure a new lair, as well as costumes and weapons for the team. With Iron Lad gone, Patriot and Kate took on the unofficial roles of co-leaders. She and Patriot even shared some chemistry and competitiveness.

Her friendship with Patriot was severely strained when she and the rest of the team learned Patriot was taking Mutant Growth Hormone to simulate Super Soldier Serum powers. After Patriot was injured, Kate blamed Captain America for not training them properly. Later Jessica Jones returned to give Kate the original Hawkeye's Bow and arrows with a note from Captain America addressed to "Hawkeye". Jessica told Kate that the only other person to stand up to Captain America the way Kate did was Clint Barton, and that Captain America wanted her to take Clint's codename. Kate did and officially became the new Hawkeye.

Along with the rest of his team, Hawkeye sided with Captain America and the Secret Avengers against the Superhuman Registration Act, which led to the Superhero Civil War.

Kate also unwittingly berates a resurrected Clint for donning the Captain America uniform and bearing the Captain America's Shield. She stated that she took on the codename "Hawkeye" to honor the original Hawkeye, and not to mimic him or disgrace his memory. It was her words that convinced Clint to condemn Stark for his behavior, and go his own path.

Not long after this initial encounter, Kate and Clint met again. During an awkward date with Eli in Central Park, Kate was attacked by Clint in the guise of Ronin. Clint and Kate meet a few more times over the next few days, culminating in Clint (in his own unique way) officially passing on his Bow and mantle to Kate.

When the Skrulls invaded Earth, Hawkeye joined the other Young Avengers and Runaways on the frontlines of the battle.

Hawkeye, along with the other Young Avengers, helped rescue the fallen from Asgard during the Siege. She and Patriot were briefly trapped under some rumble together, leading to an argument and a kiss.

After Wiccan powers overloaded and the Avengers decided to keep him under observation, Hulkling and the other Young Avnegers broke Wiccan out of holding and began the search for the Scarlet Witch. Accompanied by Magneto and Quicksilver, the team travelled to Transia and then to Latveria before discovering a depowered and amnesiac Wanda engaged to Doctor Doom. The rediscovery of Wanda did not go unnoticed though, as the Avengers soon arrived on the scene. A battle with Doom's Doombot army soon broken out and was only stopped by the arrival of Iron Lad.

Iron Lad teleported the Young Avengers and Wanda into the timestream. They all went into the past, and met reanimated Jack of Hearts, who is explode. After that Wanda remembered who she is, regained her powers and returned herself, the Young Avengers and Scott Lang into the present. She then finally confirmed that Billy and Tommy are indeed her reincarnated sons.

Wanda's increased powers were revealed to be the result of her gaining a connection to the life force itself. A ritual intended to undo the Decimation was interrupted by Patriot, leading to the powers being transferred to Doctor Doom. He intended to usher the world into utopia, a utopia in which he would rule. The Avengers and X-Men teamed up to defeat him, in the process, Stature was killed by Doom, and the villain escaped after losing his powers when they overloaded.

Iron Lad proposed to save Stature through the Timestream but Vision refused, ending with both of them battling each other and Iron Lad destroying Vision and then taking off to the timestream, even after Wiccan warned that this was the moment in time where he became Kang the Conqueror.

In the aftermath of the battles, the Young Avengers disbanded and stayed in low profile during the major events that transpired in the world (the Spider-Island infestation, the X-Men's Schism and the resurrection of the Human Torch). However, their moment of joy was interrupted by Ms. Marvel who called them to the Avengers Mansion. After a few words from Captain America all the remaining Young Avengers were officially named as full-fledged Avengers.

Team Hawkguy and the Young Avengers

In the following months, Kate was recruited as a partner of Clint Barton, the original Hawkeye, in his street-level crime-fighting. The pair has become not only dedicated duo, but also close friends. Although the Young Avengers again disbanded, Kate remained in close contact with Billy and Teddy. She also had a romantic encounter with Marvel Boy.
Superhero Class