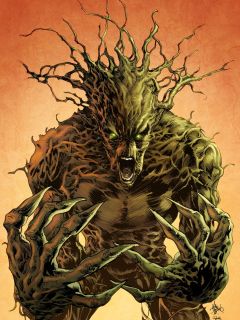 Groot posed as Divine Majesty King Groot the 23rd, Monarch of Planet X, custodian of the branch worlds, ruler of all the shades, flora colossus. Groot is a member of the Flora colossus, a society of sentient trees, discovered by the Kree.

In the Autumn of 1960, scientist Leslie Evans and his girlfriend Alice witnessed a blinding object falling from the sky. When Evans went to investigate the next day, he not only found the object, but discovered it was alive. Evans looked on as the alien creature, Groot, grew larger by the minute as he absorbed wooden objects into his own body. There in the woods, Groot announced his presence to the nearby community. Claiming to be the Monarch of Planet X, Groot announced that he had come to Earth to take a small Terran town back to his home world for its scientists to study. While the humans resisted, no gunfire, or even conventional fire could penetrate Groot's hide. Seeing the futility of trying to fight Groot directly, Evans abandoned the townspeople and raced back to his laboratory, for which he was labeled a coward.

Over the next three days, Groot used his ability to control trees and plants to turn the forest into a make-shift army. His announced intention was to use Earth's native vegetation to create a net of roots to allow him to lift the town into space whole. When Groot entered the town, Evans snuck up behind him and unleashed the fruits of his frantic work: a specially bred colony of termites. The insects voraciously ate through Groot's hide, and into his core. Groot collapsed in a a state of shock, and was believed dead by the townsfolk.

Later, however, Groot was seen alive and captured in Collector's zoo beneath Canada. When the Mole Man attacked the Collector in his lair, the security in the Collector's zoo failed, and the monsters were released. The stampede of monsters eventually arrived in New York, and were engaged by the Thing and the Hulk. Joined by the Beast and Giant-Man, the four heroes defeated the horde of monsters, including Droom, Groot, Grottu, Grogg, Gargantus, Rommbu, Taboo, Tragg, and Vandoom's Monster. Afterwards, the Hulk hurled all the monsters through a portal and into the Negative Zone.

At some point, Groot returned to Earth, supposedly to Monster Isle.

Later, Groot was tracked down and engaged by a unit of the Howling Commandos of Area 13, a branch of S.H.I.E.L.D. dedicated to tackling supernatural threats through supernatural means. Groot had blended into the surrounding woodland, despite his size, but was ferreted out by Sasquatch and the Abominable Snowman's sense of smell. The unit -- also including Gorilla Man and Warwolf -- disoriented Groot with high-pitch sonics and brought him down.

Teleported to Area 13, Gorilla Man informed Groot of his options: either join Area 13 as part of the the solution, or be imprisoned as part of the problem. When a horde of fantastic creatures under the control of Merlin poured into Area 13 through a magical portal, the larger creatures were released from their cells, causing a stampede which crushed many of the invaders. Arriving in Merlin's territory on the other side of the portal, Groot met up again with the Howling Commandos. Realizing that Area 13 would just catch up to him again if he escaped, and that the landscape had been so warped by magic that it was physically painful to him, Groot has offered to assist the commandos.

Following the defeat of "Merlin" Groot apparently went back into space, eventually finding himself in Kree space, where he was promptly captured and imprisoned. While in jail he formed a rapport with Rocket Raccoon and was assigned to a covert ops team lead by Starlord, whose goal was to assault Hala and defeat the Phalanx. His body was mostly destroyed, but a small twig of him split off, preserving him, traveling in the care of Rocket Raccoon, fitting easily in his hand. He can grow back to his full size in time.

Groot and Rocket Raccoon are having a libation in a low-down dirty spacer bar in low-down dirty spacer space when they are accosted by a group of Badoon who attempt to arrest them for 'Crimes against the Royal Brotherhood'. A quick shootout ensues and Rocket creates an avenue of escape by shooting holes in the beer barrels causing the saloon patrons to stampede for the free beer. The duo make a hasty exit and are soon rocketing away when they find themselves pursued by Badoon Attack Cruisers. Rocket orders Groot to take evasive action while he goes to boost the stardrive to allow them to escape. He finds the stardrive compartment empty and the scene cuts to a shot of the surprised Rocket with a cliffhanger closing credits and Mojo proclaiming "Best Pilot Episode Ever!".

They then find themselves staring at an empty compartment where a stardrive should be and questioning why they are hearing voices like suddenly their lives just got a narrator or something. Their ship blows up and they appear in space in combat space armor bewildered at what just happened and how they got there. They target their Badoon attackers forcing one of the pilots to eject. They squeeze into his craft and it begins to plummet to an ice planet below. Mojo calls for the scene to cut and hit the Bio-Stasis on his stars. He proceeds to plan for the next scene expecting to make enormous money on the show. In the background, Rocket's Timely Inc. Shipment Processing Device analyzes the situation and informs the duo they are caught up in an artificial dramatic construction. They blast through a wall realizing they are in a "Flarkin' TV Studio" and are confronted by a hologram of Mojo who opens fire with real weapons.

Groot and Rocket Raccoon are transported to the Mojoverse by the inter-dimensional TV producer known as Mojo. He has decided to use the pair in his latest reality television show. He recruits various criminals that the heroes have fought in the past. He places the pair in scenarios were they would have to battle them again, however if an innocent life form was caught in the crossfire, they would be killed in the process. As the duo moved from one scenario to another, Mojo began advertising action figures with a collection pack that allows buyers to assemble their own 12" Groot figure after collecting all five. The demand was so high, Mojo stand to make a fortune until the Timely Inc. Shipment Processing and Analysis Device decides to take control of the situation and holds a B-00-M Meson Beam Gun at Mojo's face. It allowed the reality system to stop just long enough for the heroes to escape. They confront destroying Mojo who is revealed to be a robot controlled by Major Domo.

Groot, along with the rest of his team, aided the Avengers in fighting the returned Thanos.Thanos managed to get a Cosmic Cube from the United States Army, with which he escaped to Moord, the homeland of the Badoon. The Guardians arrived to the Avengers Tower and informed the Avengers about the situation. They joined the Guardians to fight Thanos and the Badoon. After Thanos apparently killed the Elders of the Universe, to impose his supremacy, he became one with the Cosmic Cube and killed the Avengers as well as the Guardians. But actually, they were sent to the Cancerverse along the Elders, there, Tony Stark found that Thanos' weapon wasn't actually a Cosmic Cube and that it had defects. They bargained with the Collector, in exchange of a weapon capable of deactivating the "Cube" and return to Earth, the Avengers and the Guardians would let Thanos to be defeated by the Elders. With the help of other members of the Avengers, Thanos was defeated and sent to punishment by the Elders.
Superhero Class