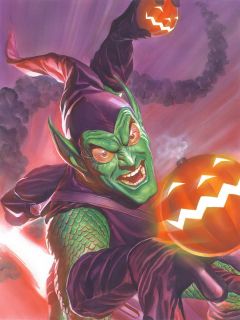 Even before consuming the Goblin Formula, Norman was extremely smart and intelligent, who was especially skilled with mathematics and science, possessing a wide spectrum knowledge of chemistry, the side-effects of drugs and other doses on humans and animals. The Goblin Formula enhanced Osborn's mental capacities and creative talents.

Norman, after drinking the Goblin formula, become superhumanly strong hence he possessed an extreme strength capacity potential. So with that said, Norman, as the Green Goblin, can easily overpower humans by sending them flying and lifting them up with one hand or by hurling them around, and can also lift extremely heavy objects, crush and break through wood panels and templates, can bend metal, and can punch through glass without gaining injury. As shown on many occasions, Norman, as the Green Goblin, can match Spiderman. More recently his strength has increased to a degree that he was able to throw Luke Cage a considerable distance.

Norman can, thanks to the Goblin formula, run and or exercise as well as operate at superhuman speeds hence his overall body equilibrium is also heightened although he isn't nearly as fast as speedsters. With his speed, he can outrun vehicles.

Norman can, thanks to the Goblin formula, operate or maintain continuous physical motion in activities or simply in his movements for prolonged periods of time without getting tired or weary in the process.

The formula also fortified all of Osborn's bodily tissues, making them far tougher and more resistant to injury than normal humans. While Osborn can be injured by something along the lines of a knife or small conventional bullets composed of conventional material, he is very resistant to great impact forces and blunt trauma. He can withstand powerful impacts, such as falling from several stories or being repeatedly struck by a superhuman enemy, that would severely injure or kill a normal human with little to no injury to himself.

If Osborn does sustain injury, his body's increased metabolism allows him to heal damaged tissue much faster and more extensively than a normal human is capable of. While not nearly as efficient as the healing powers possessed by Wolverine, he can heal from injuries that would prove lethal to an ordinary human. For example, Osborn survived being impaled by his Goblin Glider and made a full recovery with only a scar left on his chest. He also recovered from having over a dozen of his bombs explode while webbed to his chest.

The Goblin's agility, balance, and bodily coordination are enhanced to levels beyond the natural physical limits of the finest human athlete.

His reflexes are similarly enhanced and are superior to those of the finest human athlete.

After his return, Osborn not only gained more strength, he also managed to fly.