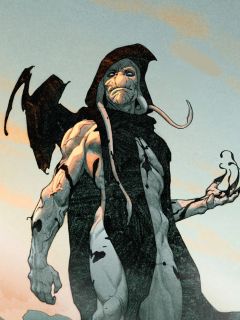 Gorr The God Butcher was born on a planet with no name, almost every day on the brink of starvation. He was taught to trust in the gods, but they never answered his prayers. At an early age, his mother and father died, leaving Gorr to fend for himself in the harsh environment. Years later he married and fathered some children. However, most of them died. Gorr's pregnant mate Arra was killed during an earthquake, and one by one his children perished until he was left with one son, Agar. When Agar was on the brink of death due to starvation, Gorr sought to ease his suffering and told his son they would soon reach a forest where they would never go hungry again.

Stricken with grief after Agar's death, Gorr gave up hope and outwardly expressed his belief that there were no gods, for which he was exiled by his superstitious people. While wandering the desert praying to die, Gorr witnessed a pair of battling gods - a dark elder god called Knull and a gold-armored purple-skinned god - plunge out of the sky and crash-land nearby. Shocked by the realization that gods did exist, Gorr was enraged when the gold-armored god begged for help; the dark god's sword transforming into an amorphous mass of living darkness and bonding to him. Gorr used his new weapon, All-Black the Necrosword, to kill the gold-armored god; then vowed to seek vengeance against all gods for never answering his prayers, and set out to kill them all. Gorr despised any god and travelled the cosmos for thousands of years to exact his revenge, embarking on a deicidal crusade in which he allegedly killed many gods of fear, war, chaos, genocide, revenge, plagues, earthquakes, blood, wrath, jealousy, death, degradation, and a few gods of poetry and flowers.

At some point in the 9th century, Gorr arrived on Earth and killed a god from the Americas; the body washing up on the shores of Iceland, where it was found by Thor. At a later date, while accompanying a Viking raiding party to Russia, Thor found some of the Slavic gods dead. Thor was attacked by Gorr, who nearly managed to kill Thor, but just before the killing blow Thor conjured a lightning strike which knocked both of them out. Gorr recovered and escaped to a cave, where he once again fought Thor. Despite Gorr attempting to torture Thor for information about the location of Asgard for seventeen days, Thor held out long enough for his Viking worshipers to find him, distracting Gorr long enough for Thor to recover and cut off Gorr's right arm, believing that he had succeeded in slaying him.

Gorr survived their encounter however and would spend the next thousand years butchering more and more gods, growing ever stronger and amassing an army of dark minions to assist him in his crusade. Thor once again took notice of Gorr's activities centuries later and began hunting him when a prayer summoned him to a world without gods, recognizing Gorr's handiwork when he found the world's deities slaughtered. While Thor went to the cave where they once fought to look for him, Gorr attacked Chronux to lay claim to the Pool of Forevers and used the blood of the Time Gods to traverse the timestream. He went back to the beginning of the universe and slew one of the very first elder gods, taking the infant deity's heart as a trophy. He then headed forward in time millennia into the future and arrived in Earth-14412, claiming a desolate world to serve as his base of operations and enslaving all the gods he could capture except for All-Father Thor, who he routinely tormented over his failures. Over the next nine-hundred years, Gorr forced the enslaved gods to mine broken planets and the cores of stars for material to build the Godbomb, which he intended to use to exterminate all gods across the entirety of the timestream. Gorr also created constructs of his deceased wife and son from the All-Black symbiote, though unbeknownst to him his "son" embodied his subconscious self-loathing.

After the arrival of Thor the Avenger from Earth-616, Gorr sent Black Berserkers into the past to get the young Thor from around 800 A.D. - the Thor he first met - and brought him back to the future, where was enslaved along with the other remaining gods. Young Thor, using a piece of a star, attempted to destroy the Godbomb, but was instead catapulted off the planet, where he met with Thor the Avenger and King Thor. The three decided to assault Gorr and his planet for the last time and nearly succeeded in killing him, but due to absorbing power from the gods he had killed, Gorr was too powerful and defeated the three Thors, leaving them for dead, and set off to activate the Godbomb. When the construct of his wife called him a god, Gorr angrily killed her.

However, "Agar" decided to assist Thor the Avenger in bringing down the God Butcher, having come to recognize that his father had essentially become the very thing he always despised. Charged by the prayers of the son, as well as every single surviving god across space and time, Thor absorbed the Godbomb's blast as well as the Necrosword. Using its power, Thor was able to weaken Gorr, with "Agar" denouncing Gorr as the God of Hypocrisy before Thor's past self finally killed him.

Even after death, Gorr had managed to leave his mark on the Thor of Earth-616, as Gorr's philosophy was responsible for Thor becoming unworthy and being unable to lift Mjolnir.

Gorr's consciousness was contained inside All-Black, finally at peace in a world without gods. Eons after his death, Gorr was resurrected by King Loki - All-Black's then-host - in order to kill him after he killed All-Father Thor. Instead, Gorr interrupted their duel by reclaiming All-Black and impaling King Loki through the back with it. Crucifying Thor and Loki, Gorr mocked them both but was blasted into orbit by the Power of the All-Father. Recalling the scattered pieces and offshoots of All-Black, Gorr engaged All-Father Thor in a battle that devastated solar systems, vowing to make Thor watch as he slaughtered the inhabitants of Midgard and all other remaining life in the cosmos before creating his own and ensuring they were devoid of the need for worship. Attacked by Loki, Gorr mutilated him before engulfing both brothers in All-Black, declaring he had transcended mortality and become not a mere god but a force of nature.

The gods who Thor had saved and sent to Indigarr billions of years in the past were awakened by the Goddesses of Thunder, who returned in time to save their grandfather and uncle. Overwhelmed, Gorr was decapitated by Atli Wodendottir, but his consciousness indwelled All-Black, the ancient symbiote preceding to infect the very universe itself. Gorr tried to devour Thor by manifesting a black hole, but was distracted by King Loki telling him the story of every heroic deed Thor had ever performed - buying time for Thor to unleash the full might of the God Tempest from within Mjolnir, destroying the All-Black symbiote. Restored to life as a mortal but left amnesiac and insane, Gorr was taken in by the Sky Lords of Indigarr to live out the remainder of his days in peace.
Superhero Class