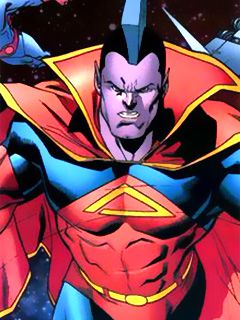 Kallark is a Strontian who went through the Gladiator enhancement process. In addition to his natural abilities, this made him able to survive in the vacuum of space and increased his power levels. He was deemed to be an Alpha Plus by the Galadorian Spaceknight Ikon.

Gladiator possesses tremendous physical strength, the exact limits of which are unknown. He has shattered entire planets with the force of his blows. His strength level is dependent on his confidence; as such the more confident he is, the stronger he gets. He has demonstrated several astounding feats of strength such as defeating Colossus with relative ease, knocking out the Thing in two blows, blunting the punches of Hyperion with his open palm and by severe effort knocking him unconscious by breaking his back, and carving one of Vulcan's eyes out and beating the Omega-Mutant unconscious. He also once uprooted the entire Baxter Building while fighting the Fantastic Four. His son Kubark remarked that he once saw him tearing apart black holes.

Gladiator is capable of running and moving at speeds vastly greater than even the finest human athlete. He is able to move at supersonic speeds, meaning several times swifter than the speed of sound, which is roughly 770 miles per hour.

Gladiator possesses extraordinary physical stamina. His muscles generate considerably less fatigue toxins then the musculature of human beings or most other known beings for that matter. Gladiator is able to exert himself at peak capacity for at least several days before the build up of fatigue toxins in his blood begins to impair him. During his battle with Hyperion, when the opponents knocked each other out with their respective eye beams, it was Gladiator who got up on his feet faster than Hyperion, who was just rising up.

Gladiator's entire body is far more durable than that of a normal human's and is virtually impervious to all physical damage. He can withstand high caliber bullets, powerful concussive blasts, falls from tremendous heights and blows from powerful superhumans. Gladiator can also survive in the vacuum of space unaided and withstand exposure to extreme temperatures, particularly intense heat. He has shown himself to be capable of flying through stars completely unharmed, and has actually withstood the explosive power of a supernova. Gladiator's invulnerability also makes him immune to all diseases, infections, contaminations, corrosives and radiation (with the exception of a rare radiation that drains his powers and vitality). However the level of his durability depends on his confidence, so if he is not feeling confident his invulnerability will weaken.

Gladiator's natural balance, agility, and body coordination are enhanced to levels that are beyond the natural physical limits of even the finest human athlete.

Gladiator's reflexes are similarly heightened and are superior to those of the finest human athlete.

By harnessing and manipulating the anti-gravitons, Gladiator is able to defy gravity which enables him to fly. Gladiator's flight speed rivals those of the fastest known starships, and can achieve faster than light speeds in hyperspace. Reed Richards once measured his speed as a hundred times the speed of light

Gladiator is capable of firing highly concentrated beams of energy from his eyes. These beams are capable of reaching extremely high temperatures. The maximum temperature his beams can reach is unknown but they can reach temperatures hotter than that of Stars as they were shown able to burn through Hulk's skin. These beams were also able to cancel out Hyperion's atomic vision, creating a huge explosion which temporarily incapacitated both opponents. The temperature level of his heat beams depends on his confidence.

Thanks to his incredible lung capacity, Gladiator is also able to draw in large amounts of air and then expel it all to create gale and hurricane force winds. He can also chill his breath to freeze targets.

Gladiator is capable of causing a counter-force against telepathic assaults and probes. However, telepaths of sufficient power are capable of penetrating his psionic defenses to an extent.

If injured Gladiator's accelerated healing factor can heal him to a certain degree. His healing factor enables him to repair cells, body tissues and bones that have been damaged regardless of severity with much greater speed and efficiency than an ordinary human. His healing factor can even regenerate cells and body tissues that have been destroyed but is limited in the sense that it cannot regenerate missing organs or limbs. When Champion defeated him using the Power Gem, he had to spend some time recuperating from his injuries. Gladiator's healing factor also keeps him in optimal health and decreases the rate of his aging by a high degree granting him a life span that is several millennia long.

Gladiator has survived for centuries with little sign of aging.

Gladiator is highly skilled in the combat arts of the Shi'ar, personally trained by Deathbird.