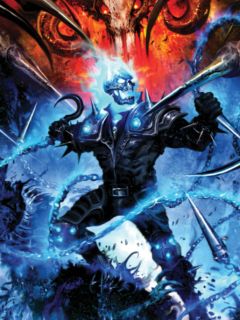 Barbara and Danny Ketch mistakenly ran into rival gangs, one led by Deathwatch. Barbara was shot during the ensuing firefight. Danny carried his sister and felt a strange medallion on his motorcycle was calling to him. He touched it and became Ghost Rider, taking vengeance on the gangs. Barbara was taken to a hospital, but was later killed under orders from Deathwatch.
John Blaze confronted this new being thinking Zarathos had returned. It was revealed that this incarnation was not Zarathos, and that Blaze and Ketch were brothers. They were seperated by the Blood to limit the chances of the Spirits of Vengeance forming, but Mephisto's manipulations forced them to use the power. The two worked together to fight Zarathos and Lilith as part of the Midnight Sons. Ketch seemed to have been absorbed into Zarathos, but soon returned. The happy reunion was disrupted by the villainous Hellgate.
After an attack by a mad Vengeance revealed some dark memories, Ketch consulted with Doctor Strange. It was revealed that the Ghost Rider form was actually an ancestor, Noble Kale, who had become a Spirit of Vengeance with the help of the angel Uriel. Their connection to the motorcycle was explained as another ancestor, Naomi Kale's placing the medallion on a bike she used. This also meant Ketch and Blaze were distantly related to sorceress Jennifer Kale. This knowledge seemed to increase the power of the Ghost Rider, although he also became more distant and angry. Even the formless void he was in while not on Earth began to show glimpses of his past.
The revelations awakened the Furies to attack Kale and all his descendants. Jennifer sent out a mystic distress signal, which was answered by Valkyrie. Together they managed to hold off the Furies until Jennifer was able to call the spirit of Naomi to order the Furies to abandon their vengeance.
Having recently deposed his father Mephisto, Blackheart began to attack the Ghost Rider with his own created Spirits of Vengeance. He also mocked Blaze by transforming Roxanne's spirit into the Blackrose. Kale was killed by Pao Fu and taken to Blackheart's 'hell.' While there, Daniel Ketch apparently sacrificed himself to unlock Noble Kale's full power. He defeated Blackheart and briefly controlled the realm until Mephisto returned. Since then it appears the Ghost Rider has rebonded to Blaze; Ketch's whereabouts are unknown.