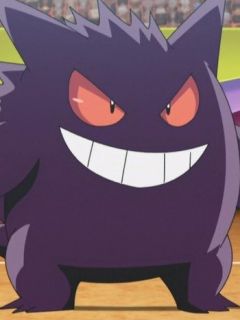 Gengar is the first Pokemon to be seen in the Pokemon anime, along with Nidorino. It was seen powerful enough to convince the opposing trainer to switch to the more powerful Onix, and the fight went on off-screen.

A wild Gengar was later seen in Lavendar Town on the Pokemon Tower, among its pre-evolutions. They seemed rather playful and were willing to play with Ash, the human visitor. However, Ash left, bringing with him a Haunter, the pre-evolution of Gengar.

Finally, Ash catches a Gengar in Galar, the new series. It was causing trouble to the Cerise laboratory. Later, Ash discovered that it had been abandoned by its trainer, so it helped Gengar and eventually caught it.