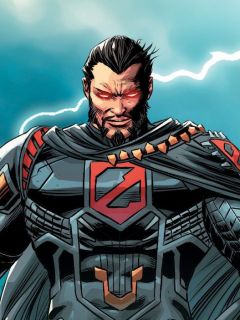 Zod's cellular structure is more dense, resilient and biologically more effective than human tissue. Strangely enough, he does not seem to possess superhuman strength levels despite his enhanced cellular ability without constant exposure to yellow solar energy. Without such charging, his strength seems on par for a human of his height and weight who engages in regular physical activity.

Solar Energy Absorption: Zod, like all Kryptonians, obtains his superhuman powers and abilities by absorbing the radiation emitted from Earth's yellow sun, and then converts its energy to his abilities, as he body acts a solar battery for such energy, effectively making him a god among men.

Dru-Zod, also known as General Zod, is an extremely powerful alien hailing from planet Krypton. With his strength, Zod can easily overpower and kill humans and most galactic beings, and as such, he can bend and break through reinforced steel, crush wood panels, and can lift extremely heavy objects and uproot and even decimate full-sized buildings and other structures with his might.

Zod is resistant to all forms of physical and mental types of harm, and as such, humans can't hurt him, bullets bounce off him, rockets, bombs and lasers can't even leave a mark on him, high-voltage energy emissions (beams) can't penetrate through him, and is immune to all earthly diseases and viruses, and he can only be harmed by other high-tier cosmic beings like Superman, and magic can harm him, and fragments from his home world called Kryptonite can cause him great pain and prolonged exposure to it can kill him.

Zod can maintain continuous movement and can exercise for unlimited periods of time without ever getting weary or tired in the process. With that said, Zod can take part in superpowerd battle sequences probably for months on end.

Zod possesses the ability to defy the forces of gravity and fly at speeds in excess to the speed of sound. The mechanism by which he flies is unknown, but some suggestions include the use of a field of energy which allows unconscious manipulation of gravity or diffraction/reflection of gravity due to unidentified Kryptonian organs affected by a yellow sun. Alternately, this power could be explained as a psionic manipulation of a personal anti-gravitational aura, which is also caused by his Kryptonian cells and exposure to a yellow sun.

Zod can exercise and or move at incredible speeds that greatly exceeds the sound barrier, and has the potential to move at speeds greater than the speed of light.

The acuity of Zod's five senses are many times greater than that of the standard Earth human.

Zod can, using the muscles in his eyes, see objects and people from vast distances away, more specifically, from at least twenty yards away, without damaging or straining his eyes.

Zod can mentally break down the polymers in objects and even organisms, allowing him to see right through the object or person, and as such, he can see through anything besides lead.

Zod can, by using the the tight, firm muscles composed in his eyes, see residues, small marks, bacterias and structures of viruses, and even cells that are inside interior complexion bodies, without causing any damage to his eyes.

Zod can perceive various patterns within the electromagnetic spectrum. He can see and identify radio/television waves as well as any and all broadcast/transmitted frequencies, allowing him to avoid detection through radar or satellite monitoring methods.

In combination with his other extraordinary vision-based powers, Zod can also see into the infrared spectrum.

Through a conscious act of will, Zod has the ability to fire beams of intense thermal energy at a target simply by looking at it. Visually, the power is typically depicted as two beams of red light firing from his eyes.

Zod possesses the ability to hear any sound at any volume or pitch. The only Earth creature who can detect sounds at the frequency he can is a blue whale (0.01-200,000 Hz). He has enough control to block out ambient sounds in order to focus on a specific source/frequency. He can identify a person by their heartbeat, or pick out a single voice in an entire city.

Zod possesses the ability to create hurricane force winds by blowing, and to chill his breath in order to freeze a target (this latter ability has also been called "freeze breath" and "arctic breath"). Zod can also inhale large volumes of air, an ability used when dealing with and disposing things like clouds of poison gas.