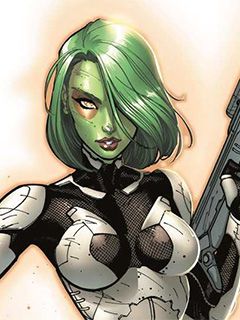 Gamora possesses slight superhuman strength, durability, endurance and reflexes, as well as a healing factor. Gamora received treatments from Thanos that enhanced her physiology. While engaging the US Military, it was mentioned that the armed forces were under the impression that she was no stronger than Spider-Man. However, her skill combined with her strength made them estimate her to be close to as dangerous as Iron Man.

Gamora is capable of running and moving at speeds much greater than even the finest human athlete.

Gamora's musculature generates less fatigue toxins during physical activity than the musculature of a human being. Gamora can physically exert herself at peak capacity for several hours before fatigue begins to impair her.

Gamora's agility, balance, and bodily coordination are enhanced to levels that are beyond the natural physical limits of even the finest human athlete.

Gamora's reaction time is similarly enhanced, enabling her to react at a level that is beyond the natural physical limits of the finest human athlete.

Gamora's bodily tissues are much harder and more resistant to injury than those of a human. Her body is also specially adapted to withstand the physiologically debilitating effects of moving and running at high rates of speed without sustaining injury.

Gamora possesses a regenerative healing factor, allowing her to regenerate from what would normally be considered life-threatening wounds in a matter of moments.

After exposure to the power of the Black Vortex Gamora's cosmic potential was unleashed, vastly improving on all of her previous abilities and bestowing additional ones.

Gamora is capable of pulling weapons out of her cloak, like a hammerspace.

Most Dangerous Woman in the Universe

Gamora is said to be the most dangerous female assassin in the Milky Way galaxy. She is a highly accomplished athlete trained in gymnastics, hand-to-hand combat, the uses of the known weaponry of the galaxy, and stealth techniques.

She is one of the most skilled martial artists in the universe. She is capable of defeating opponents who possess superhuman strength and durability that far surpass her own, and she has defeated a military platoon containing dozens of combat-trained men in only a few minutes. She has learned to paralyze or kill opponents using vital point strikes directed at certain nerve clusters.

Although skilled in the use of most conventional weapons, she prefers to use knives and swords.

She can throw most projectile weaponry with great aim and is well-versed in the use of firearms, though she prefers not to use them.

She is an accomplished strategist. She had been widely considered one of, if not the greatest, both on and off the battlefield. She is able to formulate battle strategies and her brilliant tactical sense allows her to alter any strategy to fit the changing need of the situation.

Her years of training and experience have made her an expert acrobat, gymnast, and aerialist.