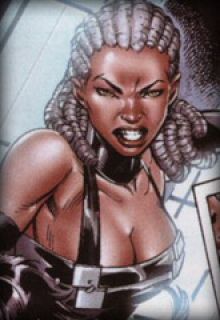 Joanna Cargill started off as a mercenary known as "Frenzy." During a mission, Frenzy came head-to-head with the mutant Gambit, and she developed a love-hate relationship with him. She soon joined forces with three other individuals and formed the Alliance of Evil under Apocalypse's leadership. She stayed with the group and served in several missions, putting her up against the mutant group X-Factor. Her first order from Apocalypse was to capture Rusty Collins and recruit him into their group. Her plan was foiled by X-Factor, and after a heated battle, she fled from feeling overwhelmed. Using a mutant with the ability to enhance others' powers, Frenzy's strength and durability made her a difficult foe for the superheroes, but she was eventually defeated after the death of her power-heightening accomplice.

Later, Frenzy was given an invitation to join the S. S. Superia, a cruise ship owned by the villainess Superia. There, Frenzy served alongside the Femizons, a group of super-powered female criminals, and battled Captain America and Paladin. She also broke free from the Vault, a prison for supervillains, and created a ruckus with the Avengers.

Frenzy eventually found acceptance under Magneto's teachings. She joined the ranks of the second incarnation of the Acolytes, and participated in several missions, relinquishing the codename Frenzy and preferring to be called by her last name, Cargill. Their first mission was to kidnap a child from a school called Our Mother of the Sacred Heart. Cargill killed Sharon Friedlander, and with her teammates, Unuscione and the Kleinstock Brothers, battled the gold X-Men team. Cargill immediately chased after Gambit, but was knocked out when Gambit hit her with a charged tire. She retreated, but during their next encounter with the X-Men, she battled Iceman. Although they have both changed from the X-Factor days, Cargill pummeled him until he gained enough power to defeat her with his new ice form.

After Magneto was revealed to be alive, Cargill was among the Acolytes who quickly turned on Fabian Cortez and joined Magneto in his mutant sanctuary, Avalon. While on a mission to recruit mutants into their cause, Cargill, along with Milan and Unuscione, found the young, meek boy Neophyte, after his betrayal of the Acolytes, Cargill was quick to vote guilty at his trial. During the Fall of Avalon, Cargill allied herself with long-time enemy Cyclops in order for survival, and she and her fellow Acolytes were able to escape the destroyed space station in time. They crash landed in Australia but were given to the authorities.

Cargill as an X-Man.The Acolytes escaped prison and found the remains of Avalon, worshipping it and the return of Magneto. Exodus eventually took over leadership of the Acolytes, and Cargill participated in the attack on Mount Wundagore, the High Evolutionary's base of operations. After the Acolytes disbanded, Cargill became ambassador for Genosha and served as Magneto's right hand woman. She ordered that every country pledge loyalty to Magneto in order to be given some autonomy. She was eventually captured by the government in attempt to find out more of Magneto's plans, but Cargill refused to speak.

The meeting in Washington DC was cut short, as Jean Grey entered and freed Cargill, giving her the option of joining Jean's new interim X-Men the easy way or the hard way. Cargill would not turn against her savior, so Jean used her powers to mind-control her into helping them. As a member of the X-Men, Cargill's personality was altered into a campy, awkward woman, far different from her confident, headstrong nature. Cargill's knowledge of Genosha helped the X-Men find Magneto's base. The inexperienced X-Men attacked but were quickly defeated. Cargill was used against her will to battle Magneto, but she was ultimately constrained with a metal pillar. After Magneto's defeat, Cargill was freed from her mind-control, where she immediately left the X-Mansion. It is unknown of she returned to Genosha or where her life has led her. She is also one of the few mutants left after M-Day.