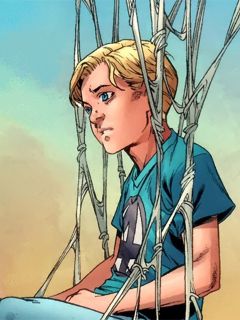 Franklin Richards is the son of Reed and Susan Richards, who are better known as Mister Fantastic and the Invisible Woman of the Fantastic Four, the first modern team of superhuman adventurers. Reed and Susan Richards developed their superhuman powers as a result of exposure to cosmic radiation during a flight in outer space. Their exposure to this radiation also had important consequences for their son, who was born years later.

First, the radiation somehow affected Susan Richards' body in such a way as to give her serious difficulties in giving birth. For unknown reasons, soon before she was to give birth to Franklin, Susan Richards' blood cells were observed to be carrying a strange form of energy that threatened the lives of both herself and the baby. Presumably, this energy effect is linked with Susan Richards' superhuman powers over energy that enable her to become invisible and to create force fields.

With Franklin's birth imminent, Reed Richards and his teammates, the Human Torch and the Thing, journeyed into the anti-matter dimension called the Negative Zone to find the only means known to Mister Fantastic of saving his wife and unborn son: the Cosmic Control Rod wielded by Annihilus, one of its most dangerous inhabitants. Mister Fantastic succeeded in obtaining the Rod and drained energy from it into a special container, which he and his two colleagues then brought to their own demension. Reed Richards succeeded in using the energy from the Rod in bringing the energy in his wife's blood under control, and she safely gave birth to a healthy son. The infant was named Franklin Benjamin Richards in honor of his late grandfather, Franklin Storm, and the Richards' best friend, Benjamin J. Grimm. In his early years the sorceress Agatha Harkness acted as Franklin's nanny and protector.

The cosmic radiation that had given Reed and Susan Richards their superhuman powers also resulted in affecting the genetic structure of their son: Franklin was born a mutant. Unlike most superhuman mutants, whose unusual powers do not emerge until the mutant reaches puberty, Franklin began manifesting his superhuman powers at a very early age. In the normal course of events, Franklin's psionic powers would presumably increasingly emerge as he grew older until they reach their full, vast potential when he achieves maturity.

However, this normal process was ruined by Annihilus, who, during a later conflict with the Fantastic Four, placed Franklin within a machine that triggered the release of his full psionic potential. Franklin was too young and inexperienced to control the vast energies building up within him, and Reed Richards feared that his son would be unable to prevent himself from releasing so much psionic energy to destroy all life on Earth. Unable to find another means to deal with the problem in the short space of time left before disaster would strike, Reed was forced to use a device that rendered Franklin comatose, and thus unable to project psionic energy.