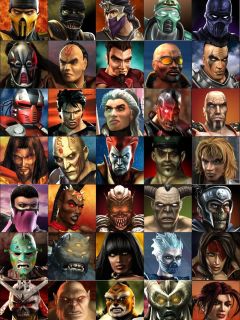 The Forces of Darkness refers to a gathering of evil (and sometimes neutral) aligned warriors by Shinnok in the game Mortal Kombat: Armageddon. They are the opposing army that clashes with the Forces of Light in the Battle of Armageddon. The army contains up to 35 members.

In the intro sequence of the game, and in the final moments of its Konquest mode, two armies, the Forces of Light and the Forces of Darkness, do battle in the southlands of Edenia. They are interrupted by the rising of the Pyramid of Argus, and atop it is Blaze. The two armies now race to the top, each individual hoping to defeat the fire-elemental and absorb his power.

Each character's ending in the game is what happens if they were the one to defeat Blaze and take the prize for themself. In the game, it is shown that Shinnok is partially responsible for the large amount of warriors, as he spreads the word of Blaze and the prize to other kombatants. In Outworld, Taven, searching for Quan Chi, listens in on a conversation between the Netherrealm sorcerer, Shang Tsung, Onaga and Shao Kahn. They are discussing an alliance, though it is a shakey one, as they are all evil and betrayal is to be expected. Quan Chi convinces his bitter enemies to stand together, at least initially, and when the Forces of Light are destroyed, they'll see which evil triumphs over all of the others.

Except for Shao Kahn, all members perished.