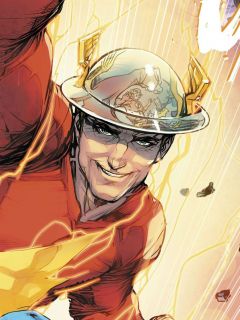 As a boy, Jay Garrick used to read pulp magazine stories of the turn-of-the-century super-hero, Whip Whirlwind. Little did he know that he would be granted the same powers of super speed.

Jay would go to Midwestern University in Keystone City where he would double-major in chemistry and physics. An experiment he was working on during his junior year was to purify hard water without any residual radiation in a cyclotron. When a test tube of the hard water was accidentally spilled, the fumes knocked him out. His friend Elliot Shapiro dragged him from the lab. After a week of unconsciousness, during which Jay's metabolism increased and his body rejected nutrients, he discovered that he had been given superhuman speed by the accident, and he used this speed as the superhero, Flash .

Jay was an active member of the Justice Society of America. Like the rest of his comrades, certain spells kept him from aging much as the years went by.

Three of Jay's enemies, the Fiddler, the Thinker, and the Shade, built a resonator that vibrated Keystone City out of real space, putting its citizens in suspended animation, and causing the rest of the world to forget the city's existence. However, much later, Barry Allen discovered the lost city when he vibrated at a certain frequency. After waking up Jay, the two Flashes were able to beat the villains and save the city. After this event, Jay retired, leaving Barry to continue the mantle. However, Jay would fluctuate in and out of retirement, helping out Barry or Wally West if needed. He also continued to work as a scientist. When the very life on Earth was threatened by solar flare radiation, Jay was put in charge of the situation by the government.

Jay eventually disappeared, along with the rest of the JSA, and Joan believed him to be dead. He returned, however, and soon was back in action with Wally.

When Professor Zoom arrived at Jay's doorstep on Christmas Eve, genuinely believing to be Barry Allen and convincing everyone else, Jay and Joan let him stay with them. Soon, however, it became obvious of this Barry's malevolent intent. After it was falsely revealed that Wally had died in a Combine trap, Jay rounded up his old cronies Johnny Quick and Max Mercury, and together they went after "Barry". They were defeated quite handily. In a subsequent fight with "Barry", whose identity had been revealed by Wally as Professor Zoom, at the state penitentiary, Jay's leg was broken.

During Zero Hour, all the members of the JSA were aged to their chronological ages by the villain Extant, including Jay. He stripped himself of his Flash symbol, giving up. Soon, however, he was back in action with Wally West.

Wally brought in Jay to help teach Bart the ways of super-speed, an adventure that soon transformed into a fight against Kobra. Jay was unable to participate for long, however, because of sheer fatigue.

A few years ago, the Justice Society of America reformed to help the JLA against an imminent threat rising from the 5th Dimension. While fighting the mad imp, Lkz, Jay and his JSA teammates helped to free the Spectre. This, in addition to the untimely death of longtime ally, Wesley Dodds (the Sandman), prompted the remaining JSA members to fully come out of retirement. Flash worked alongside contemporaries Alan Scott and Ted Grant to train a new era of heroes upholding the legacies of veterans such as Mister Terrific, the Star-Spangled Kid and Hawkgirl.

One of the adventures of the revitalized JSA included a battle with an old foe named Johnny Sorrow. During this incident, Jay had his first true brush with the Speed Force. He used his super-speed to trap Johnny Sorrow inside the Speed Force, but the battle propelled Jay 3,000 years into Earth's past. He arrived in ancient Egypt, where he met Teth-Adam, the sorcerer Nabu and Prince Khufu Kha-Taar (all three of whom were analogs to Jay's future-teammates, Black Adam, Doctor Fate and Hawkman). With the aid of a device known as the Claw of Horus, Jay was able to return to his normal time period.

A short time later, Jay and his wife, Joan, took young Jakeem Thunder under their wing. Longing for the child they never had, the Garricks invited Jakeem to stay in their home in Keystone City.

One of Jay's most harrowing battles in recent history involved an old war-time foe, the Dragon King. The Dragon King gained possession of the legendary Spear of Destiny, and used it to take control of Jay's mind. He forced Jay to engage in a brutal fight with his close ally, Wildcat – a fight that cost Wildcat nearly all of his nine lives.

Recently, a major battle with the Gentleman Ghost, as well as the aftershocks of the Infinite Crisis event destabilized the ranks of the Justice Society. Jay Garrick has joined with charter members Alan Scott and Ted Grant in an effort to reform the Justice Society of America. He has also devoted a portion of his time towards aiding Bart Allen – the latest inheritor to the legacy of the Flash, with protecting his home town Keystone City.

Recently, Jay has been helping Bart Allen against the crazed efforts of his former friend, Griffin Grey. Griffin stole a device from S.T.A.R. Labs designed to steal the Speed Force from Jay’s body. The intense radiation produced by the machine weakened Garrick to the point of death. However, Bart Allen found him moments later and channeled lightning from the Speed Force to restart Garrick’s heart.

With the coming of Gog, Jay, along with the rest of the higher ups of the JSA are very apprehensive of the deities' motivations. When it appears that Gog's actions are becoming highly questionable, an argument ensues between the JSA members who thinks he is a good and benevolent being sent to help the Earth, and those who don't. The team becomes fractured as they decide to learn more about Gog.

When the rebellious half of the JSA shows up to tell the other half what Gog is doing to the planet, a battle ensues. For the JSA's defying of Gog and his will, he undoes all the "miracles" he has done for them. Gog decides to punish the JSA starting with turning Jay into lightning, so that he could power an entire continent. While he was saved from the effects by Superman's intervention, the process had already started to take place, causing him to move at high speeds and turning his body into pure Speed Force. Dr. Mid-Nite suggests they slow him down before his body disperses.