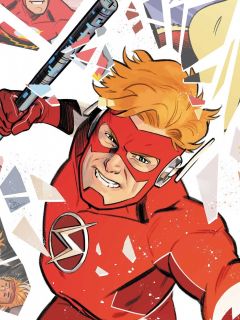 While all speedsters are powered by the force, West mainlines the power from the force itself and cannot be cut off from the source, unlike the others. Wally is the fastest of all the Flashes perhaps rivaled only by his mentor, Barry Allen. He is arguably one of the fastest beings that has ever existed. He is currently fast enough to easily break all the barriers and even enter the Speed Force. Wally has, on several occasions, traveled much faster than light and been pulled into and exited the Speed Force by his own volition. The Flash is considered to be one of the most formidable and powerful meta-humans on the planet.

Along with every speedster that draws from the speed force, the loved ones of the speedsters will gain eternal youth like Jay's wife and Barry's wife ages have shown.

Wally discovered if he concentrated, the Speed Force could be used to create solid constructs which he used to compose his costume. The first time he used this ability was to create a solid armor enabling him to run despite having broken legs. Later examples included sealing up the openings of his costume against disease, creating pockets for holding things, etc. His costume itself is a construct molded from the Speed Force. At times he'll create walls of pressurized debris to surround an area. [citation needed]

"Lending" velocity to objects or people already in motion. Since his interaction with the Speed Force, he may also lend his speed and angular momentum to another object or person. This may allow others to run alongside with the Flash.

He is able to "steal" speed and/or momentum from anyone or anything, including beings such as Superman or Inertia effectively turning them into living statues. Also can steal speed from bullets and other fast moving objects thrown at him or at others. This ability is so great, that he once took the speed from the entire planet, and its population, including the very fast beings such as Superman, Jay Garrick etc. He cannot, however, steal speed from speedsters such as Doctor Zoom, who creates his own negative Speed Force and is able to corrupt/negate the Speed Force and Barry Allen who is the Speed Force and its sole creator.

The Flash's body is surrounded by what he calls his "speed force aura". This aura protects him and anyone who is running with him or carried by him, from the effects of using his speed. This includes friction and airborne particulate matter. It also protects him from injury from high speed impacts such as punches he delivers and receives from his opponents. With this aura, he is able to absorb kinetic energy. Wally can sync his aura with his children, giving him the ability to pull either of them to him with a thought.

The Flash possesses vast superhuman endurance that is nearly inexhaustible. He was able to run non-stop for over 10 days straight without tiring against Krakkl (Who was stealing the speed of his entire race and adding it to his own. A race where every single individual could achieve the speed of light.), through time and space across existence (Everywhere from the fourth dimension to the Big Bang was their track field.) at speeds so far beyond light and so unimaginable, he was constantly breaking through all the barriers and even brushed the true Speed Force itself directly.

It appears that the Flash may run at any speed that he thinks is possible. Wally West is by far one of the fastest beings on the planet, and is arguably one of the fastest beings to ever exist (Although the title of "Fastest Man" has been given back to Barry Allen in his return in "Final Crisis"). Theoretically, speeds greater than Mach 10, are dangerous to both the people and to the environment. This speed would still be the equivalent to approximately 2 miles per second, allowing him to cross the United States in about 23 minutes, or circle the world in about 3 hours, but the Speed Force has shown that if needed, Wally West can use it to prevent such effects from occurring, hence why he is able to run at speeds much faster than light on the planet Earth without it having devastating effects on the planet. He can also run across bodies of water and up the sides of buildings. Wally has shown that he can achieve practically any speed he wishes and that there are no limits to his speed. He has been able to casually move beyond the speed of thought, easily move so fast that even an attack moving at the speed of light seems to be standing still and at the same time scans the face of over five hundred thousand people for a specific expression in less than a picosecond. He is able to easily save and carry over half a million people 35 miles away from a Nuclear Warhead that had already detonated including the ones at ground zero in only 100 picoseconds, and even move so fast that he exists everywhere at once. He is able to casually reach speeds such as 500 times the speed of light. He has moved and ran so fast, that he was capable of outrunning and defeating death itself (the Black Flash) by outracing it to the end of time/space, past entropy, the next Big Bang and into the next Universe. His speed is so immeasurable that he has moved and reacted by the attosecond (an attosecond is one quintillionth of a second. To put this in perspective, one attosecond is to one second, what one second is to the age of the universe.), and has even reacted and calculated by the zeptosecond (Which is one trillionth of one billionth of one second.) and has other feats of speed that are immeasurable.

Traveling near the speed of light acquired the relativistic mass of such speed to impart blows which could hit with a force greater than that of "a white dwarf star", Flash's own durability regulated by the Speed Force in such cases. Realistic effects take over as a body approaches light-speed (His control over his powers and the Speed Force is so great, that he can choose to ignore these realistic effects if he wishes to). Visual input will begin to blueshift and his body's mass will increase towards infinity. With this ability, he was able to knock out a martian as durable/tough as Superman from Mount Rushmore to the plains of Africa, all with one devastating punch.

Wally West has shown to be able to traverse time and dimensions with his own powers, unlike Barry Allen, and the other speedsters. However, Wally now accelerates to the point that he is skirting the very edge of the Speed Force dimension or even entering it. He can traverse along the time-stream to specific points as they become visible, much like watching a movie in fast forward or reverse. In order to enter the Speed Force and time travel to different periods, he must exceed light speed, which he can easily and instantly do.

Accelerating his healing factor while using the Speed Force to sustain him, he could heal from any injury instantly, without prematurely aging like his alternate version, Walter West.

The Flash has always possessed the ability to control his speed and angular momentum at the molecular level, and control his molecular interactions to allow his body to pass through any substance. If he chooses Wally can excite the molecules of whatever substance he vibrates through to critical mass causing it to explode. While in an intangible state, the Flash is immune to any airborne viruses and can breathe regularly. He can also vibrate so fast that light does not reflect off him, rendering him invisible.

By spinning like a helicopter, he can even perform a limited kind of flight. Since his power is a quantum/molecular phenomenon, the Flash has been able to fly just as other metas do (and there have been other flying speedsters in the past, such as the deceased Johnny Quick) because he can control his absolute molecular energy and direction and force it in the direction he wished to move without running. Though he rarely makes use of this ability as he enjoys running. The Speed Force also allows him to run in frictionless environments, as he was able to run in space itself, as casually as he was running on the ground without any outside assistance.

The Flash possesses the ability to alter his perceptions so that falling objects can appear to be standing still and can be caught and moved back to their normal position. He can disarm or jam any number of opponents weapons before they are even aware of his movement and can hurl small projectiles at hypersonic velocities. His ability to alter his own perception of time is so great, that if he wishes, the tick between a second can pass for millions of years. He can even push this ability to the point, that to him, it's as if the Universe is standing still. It does not truly stand still, it is his own perception of time that seems to stand still, and his body automatically adjusts to his perception, hence, the slower he views the world, the faster his body moves through time/space to adjust to his perception. He can even all together, break time through the time and dimension barrier, to truly be beyond time/space. He can do this so quickly as to have it happen invisibly to the normal human eye. He can effortlessly strike a single opponent or multiple opponents million of times in a second.

The Flash's mental abilities are also increased in speed, simple computations can be done at lightning speeds, and his ability to perform normal feats at increased speeds has allowed him to build hundreds of force field generators in a matter of minutes, move sandbags to cover a beach or search an entire area for something as small as a paper clip. Wally can also read at super-speed, but rarely takes advantage of this ability to learn at increased speeds, although Jay Garrick has done so and has become a jack of all trades in several disciplines and languages.

By running in a circle at a certain speed, Flash is able to create a vortex with a variety of effects. One effect is pulling the air away from the center in order to suffocate an enemy. Another effect is levitating whoever and whatever was in the center. Also, able to send anyone or anything into another dimension when running around them. Some other effects are acting as barriers to movement or funnels for toxic gases. The Flash also can spin his arms to create directed funnels of hurricane speed air that can knock down barriers or reduce the speed of a falling object. When putting out forest fires, what the Flash does when he runs around the perimeter is create a pocket tornado. The updraft lowers the temperature inside the funnel and raises the fire off the ground which takes away its fuel source.