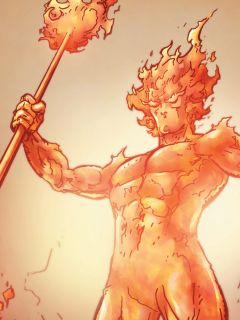 Pyreus Kril was serving as first officer aboard the Xandarian explorer ship Way-Opener when his commander and friend, Gabriel Lan, was unexpectedly abducted by a teleportation beam. Vowing to rescue him, Kril assumed command of the Way-Opener and began to pursue the huge ship that transmitted the beam. Kril would later learn that the ship belonged to Galactus, the world-devourer, who was seeking a new herald (since his first herald, the Silver Surfer, betrayed him) and found a worthy candidate in Gabriel Lan. Using his cosmic power, Galactus transformed Lan into the Air Walker. For years, Lan served Galactus faithfully, while his ex-crewman Kril followed Galactus's wake of destruction. When Galactus was attacked by a powerful race called the Ovoids, the Air-Walker was slain defending his master. Galactus transferred his herald's dwindling life force into that of a replica, but the replica was not enough like his loyal herald to please Galactus. Thus he dispatched the Air Walker automaton to Earth to summon the Silver Surfer back to active duty. The Surfer refused, destroying the automaton in the process. Persuaded to leave Earth without the Surfer, Galactus returned to the stars heraldless, not even bothering to claim the remains of the Air Walker replica.
It was then that Pyreus Kril caught up with him. Boldly teleporting himself aboard Galactus's ship, Kril demanded the release of his former commander Galactus was impressed by the Xandarian spaceman's determination, and offered to tell Kril of his commander's fate if he agreed to become his new herald. Kril agreed and was transformed by the power of Galactus into Firelord. Though Galactus kept his side of the bargain, he suppressed the knowledge he had given Kril so that he might send him on a mission to Earth. Firelord was released from active service when the Earth god Thor offered Galactus the Asgardian construct called the Destroyer in exchange for Firelord's freedom. Unlike the Surfer, who was sentenced to remain on Earth for his treason, Firelord was free to leave. Yet Firelord chose to remain because of his subliminal memory that the Earth was the final resting place of the remains of his friend. Months later, when the Air Walker automaton reactivated itself, he remembered the reason for his compulsion to remain. Taking custody of the automaton (which was wrecked once more in battle with Thor), Firelord bore him into space, where he buried the remains on an asteroid in their home star system. Free of his only tie to Earth, Firelord has since returned to his native Xandar, only to find the world had been destroyed by the space pirate Nebula. He has since joined forces with Nebula's great uncle Starfox to track her down.