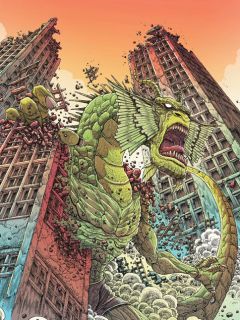 Foom possesses various superhuman attributes common among his race. It isn't known, however, if the level of Foom's various powers is average or above average for a Kakarantharaian.

Foom possesses vast superhuman strength, the full limits of which aren't known. At his peak, however, it is known that he is able to lift well in excess of 100 tons.

Foom's scaly body is highly resistant to all forms of conventional physical injury. He has been shown to withstand high caliber bullets, anti-tank weaponry, falls from tremendous heights, temperature extremes of both hot and cold, great impact forces and powerful energy blasts without sustaining injury. Foom can also survive in a vacuum environment, such as outer space, for an undefined period of time. As a result, he either has no need to breathe or can hold his breath for much longer than a human.

Foom, like all members of his race, has an extraordinarily long lifespan. He has existed on Earth for thousands of years, though he remains as physically able now as when he first arrived. However, this doesn't mean that he is fully immune to aging.

Foom possesses the ability to alter both his physical appearance and size to a considerable degree. Foom can temporarily make himself look like a human being and has demonstrated the ability to increase his overall height to at least 100 feet in the past.

Regenerative Healing Factor: In spite his his high resistance, it is possible to cause Foom injury. If injured, his body's superior metabolism enables him to rapidly regenerate damaged or destroyed tissues much faster and more extensively than a human being. It is possible for Foom's healing capabilities to regrow severed limbs, though he may have to enter a state of hibernation to do so.

If Foom's body were to sustain injury beyond his natural ability to heal, his body will die but his spirit will remain as viable as ever and doesn't cross over into some form of afterlife. Foom's spirit can then possess the bodies of other beings, including humans. Foom can use these other bodies as hosts for a while before his energies wind up burning them out and killing them. However, what he typically does is somehow transform the body he inhabits into a copy of his original body possessing all of his various natural attributes. This ultimately explains Foom's reappearances despite having been witnessed being destroyed on multiple occasions.

Foom's large, leathery wings are able to propel him through the air at great speeds for extended periods of time. While the upper limit of his flight speed isn't exactly known, it is believed to be well under the Speed of Sound.

Foom has demonstrated that he possesses some degree of telepathic abilities, the full limits of which aren't known. Foom uses his telepathy to communicate with others and it's also known that he can control the minds of other reptilian life. Through some unknown means, possibly due to other psionic abilities, Foom once merged a number of reptiles together, creating a new body for himself.

Foom is able to expel a combustible mist from his mouth that has a highly acidic corrosive effect, though the mist actually resembles fire rather than mist itself. Foom's mist is able to quickly burn through most known substances or he can purposely channel the mist in the form of powerful concussive blasts.

Foom is highly experienced with and in the use of the advanced technology of his home planet. He is an accomplished and proven spacecraft navigator and has proven himself to be an excellent hand to hand combatant. He has mastered the fighting style of his people, which happens to be identical to a number of Asian martial arts.