Team Mimic Mimic can copy from most(if not almost all) of given powers and abilities set from superpowered heroes/villains(×5). That's anyone on a battlefield(friend or foe). So, they have to take this one.

@Mr_Incognito: I'LL continue this conversation then.

The first 4 (Superman, Wonder Woman, Martian Manhunter, and Flash) combined can definitely destroy a galaxy. Superman and Flash can do It by themselves so idk what your on.

Superman's heat vision has countered some crazy stuff. Martian Manhunter telepathy and intangibility could easily take Thor out. WW sword cuts atoms and when those bracelets are off?? yeah. Flash is way more powerful that you probably think, ever heard of an infinite mass punch?

You obviously don't know much about Mxy if you think he can't beat Thor. He is a top tier reality warper.
He can unwrite the universe if we wanted to as seen here-

Thor has NOTHING on that

Mxy can't be killed, even HE tried too and still failed.

When your speaking of the "Demon Lord" that Thor fights your talking about Surtur, correct? Trigon and Surtur are nowhere near the same power level, with Trigon being way more powerful.
At age 1 he ruled a planet
When he turned 6 he destroyed it
At 30 he ruled a dimension.

"Destroying planets and conquering universes with the boys xx" 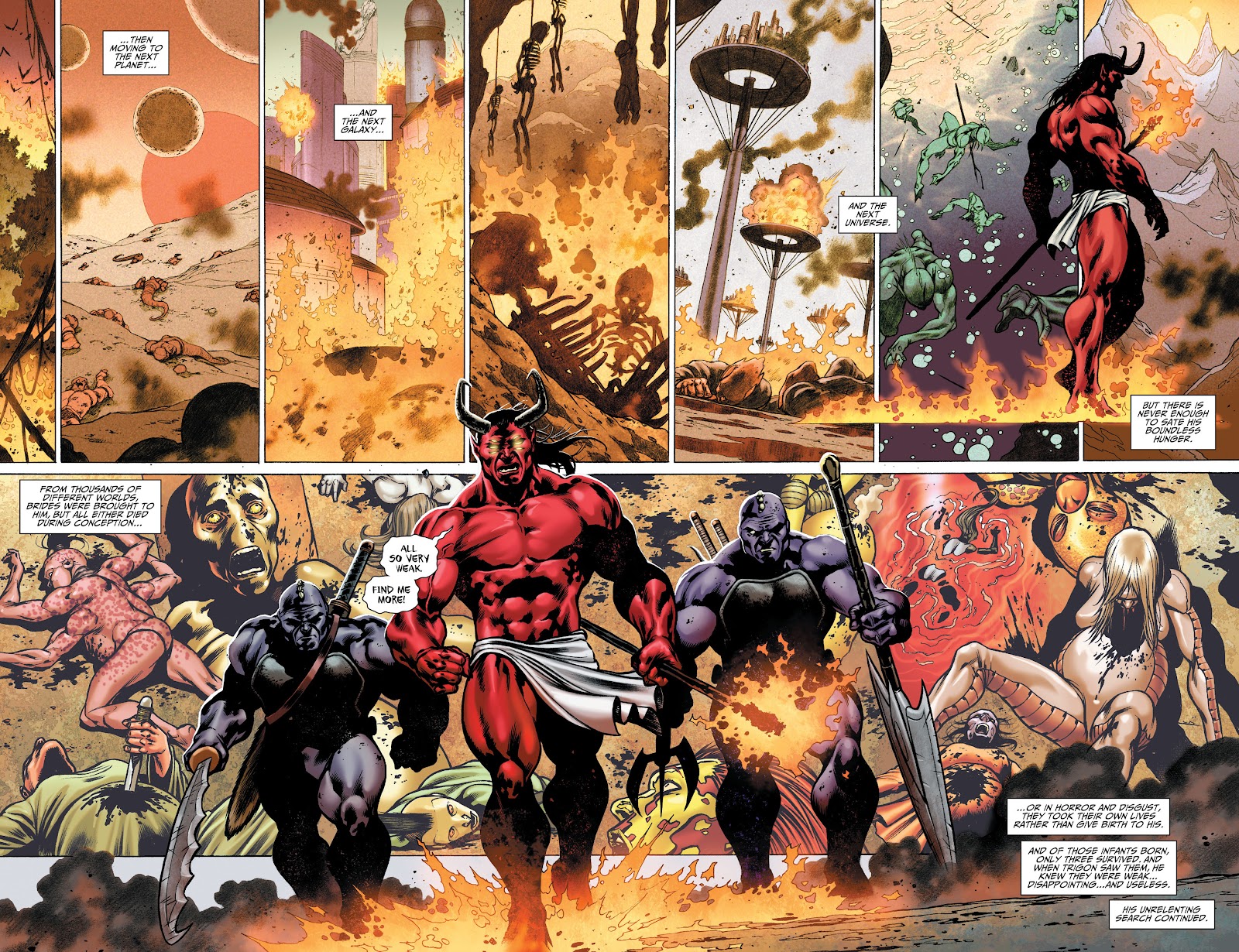 He also stalemated with Mxy.

Doctor Fate has stalemated with Spectre as shown below:

I will repeat again, Swamp Thing cannot be killed UNLESS you kill all plants in the DC UNIVERSE. Thor cannot do that. 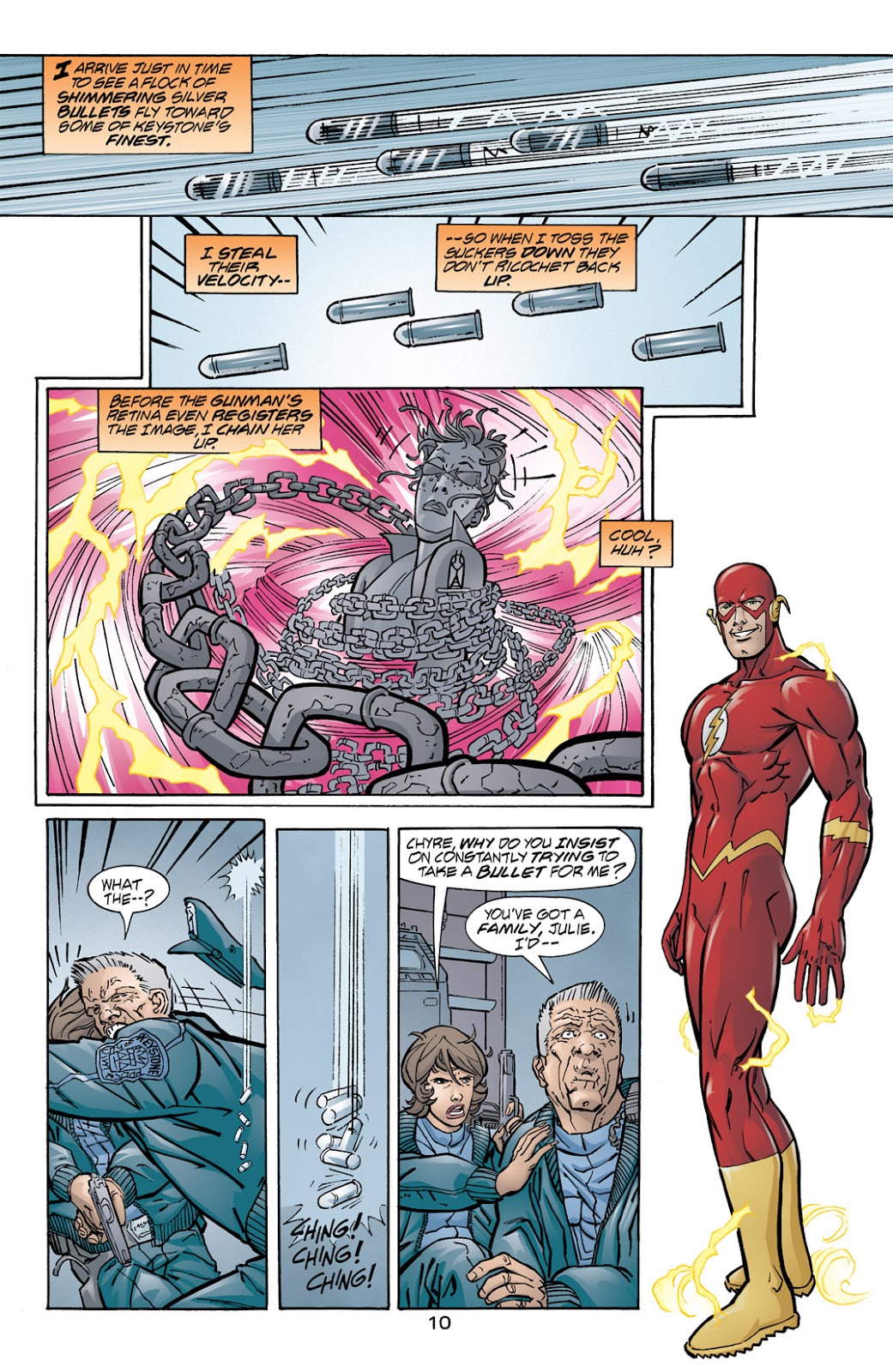 Flash was full control over every molecule in his body. He phases through vibration.

Hulk But Hulk can get stronger from the damage he gets from them. If the battle lasted for as long, The Fantastic Four would give up first and the Hulk would win because his limitless stamina would keep him from losing.

I don't know if it still exists.

Fantastic Four But overall he would never get the upper hand against Thing and Sue combined, even if they couldn't kill him, they could keep just destroying him. With both of them going full power against him he's not going to beat them. Add in Johnny (who's manipulated the entire sun before) and he has no chance. It's not a death battle, but if it was reed could just build something why the rest of the team keeps him there.
Ti
Tigerking2020 10 d
Fantastic Four vs Hulk #

Hulk The Thing beat him one time, but The Hulk can beat him every other time. Once again, The Beyonder stated that The Hulk's strength has no limit, meaning he could keep getting angrier and become stronger and stronger. Just because they're portrayed as equals doesn't mean they are equally strong, they are just the big guy on each team. Even if Sue can blow Hulk's head off, he can still regenerate from it.

Oh wow, cool. Does it still exist? I mean, if it did I would assume Ezio would be Cosmic

Well, she's been both good and bad to some extent, so we don't have to imagine much there.

Yes I've read the comic, but aside from Doom himself it was a fairly underwhelming team. That team certainly couldn't defeat the main avengers without Doom.

Invisible Woman Nice! Thank you my friend. In case you were wondering Sue's powers are actually really untapped, and she has a lot of potential. She once even destroyed a celestial, and her force fields consistently hold off punches from the likes of the Thing and the Hulk.

Fantastic Four But the Thing and him are constantly portrayed as equals to some extent. The Thing has knocked Hulk out with one punch before. Add Invisible Woman in and it's an easy win. Again, she's literally destroyed celestials. She can destroy him. She could literally blow his head off by creating a bubble in his brain. The Thing alone defeats him on occasion, and his base strength is higher than hulk's, since Hulk can only beat him once he gets madder.

Also wanna throw out the D.R.A.G.M.A. from Godzilla: The Series (because I've been binging it). They reduced the US population to a few thousand and killed all other Kaiju on the planet. They also adapt to whatever they're attacked with, so think of them as an army of flying Triceratopsian Doomsdays.

The Presence Nobody is going to agree with you so knock it off. When TOAA says, "The mystery intrigues me," it means there is a mystery that interests TOAA so he isn't omniscient. You think I worship DC a little to much? Look at yourself for once, you worship and treat TOAA as if he is above omnipotence like he can solo anyone in any comic book but TOAA is the dumbest most pathetic fodder I have ever seen in my life. Regulator Thanos stomped TOAA and Protege stomped TOAA.

Jack Kirby has his own separate profile and has nothing to do with TOAA. TOAA is at best equal to The Source in DC. The Source is the source of all existence in DC making The Source the Omniverse itself, which completely matches TOAA except TOAA is only Multiversal. 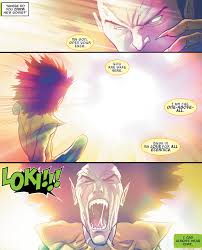 The Source and TOAA are both a massive beam of energy so they are equal but TOAA is only Multiversal while The Source is Omniversal. The Source is the Omniverse itself while TOAA is the multiverse itself. Also, TOAA admits it isn't true omnipotent.

@Savage, it is above herald.

BlotskyA 10 d
Vote for my battle (read description BEFORE posting) #

Darkseid (DCEU) I don't understand how so many people vote for godzilla when darkside wins in all categories (except one, and another draw)

The Beyonders murdered the Marvel multiverse, including the Living Tribunal

Abomination HOW IS DOOMSDAY (DCEU) WINNING!?

Team The Presence Overvoid is basically an infinite canvas of white page where fiction and stories are written it is an endless blank page it is infinite in size and it is the reason for all of fiction and creation but grant Morrison stated that he itself dosent understand them concept of story so it manifested an infinitely small part of himself: 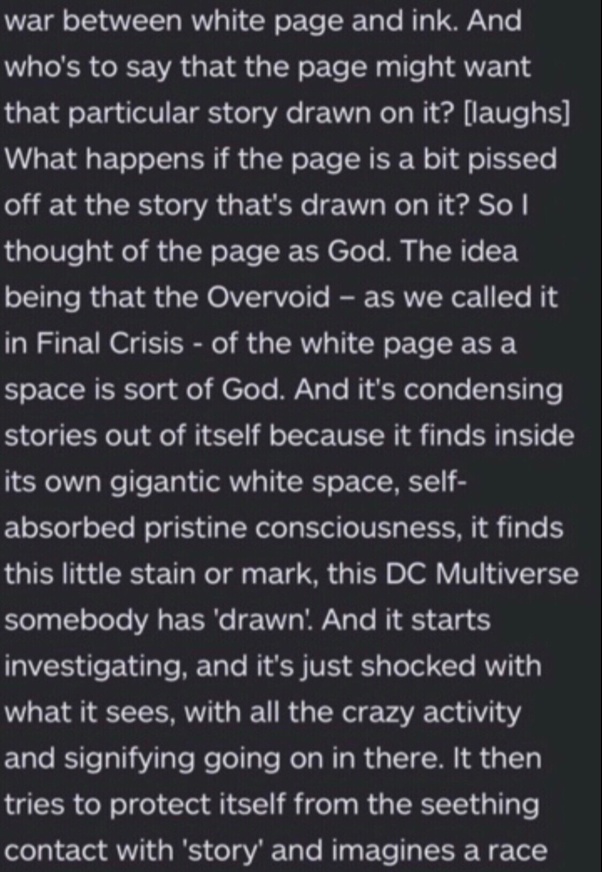 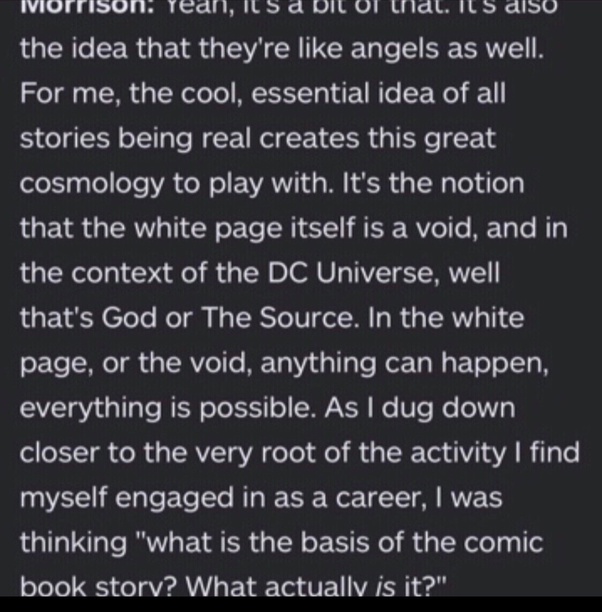 he is so big all of dc and everything are bacteria to him: 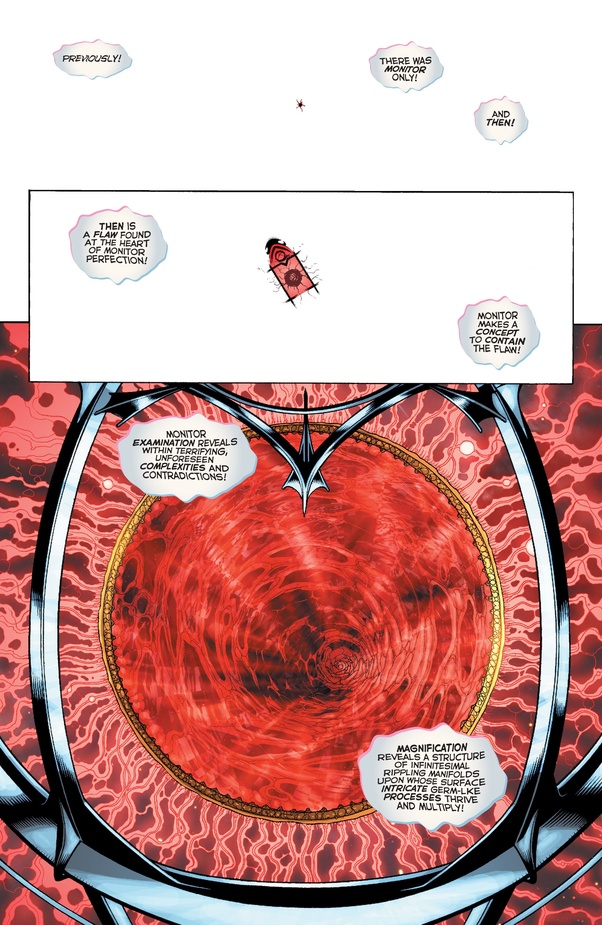 Even The history of creation of the DCU tells us that there was a time when only the Overvoid existed. The Overvoid is infinite in size and it was simply a homogeneous endless blank place. Then in Overvoid a Flaw was born. And that Flaw was the story.

It exists beyond all definitions of space and time: 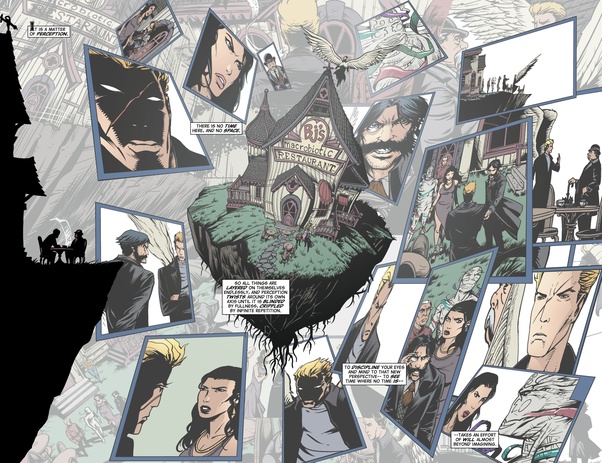 Dc cosmology itself is just a single layer compared to the Leviathan stories where infinite heirarchy of stories transcends and views the lower level as mere fiction . To them DC Omniverse as mere fiction: 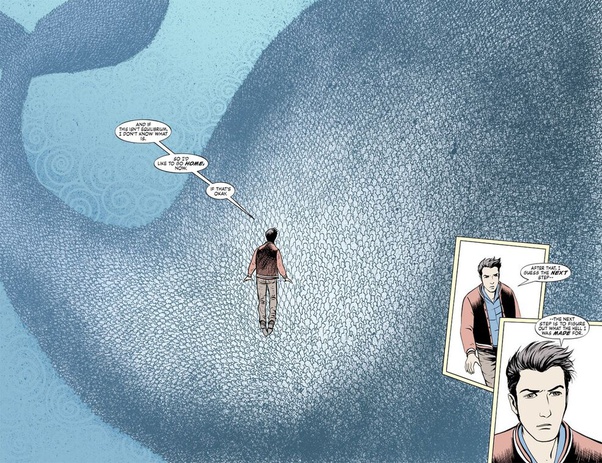 it is a reality where stories of the stories make more stories: 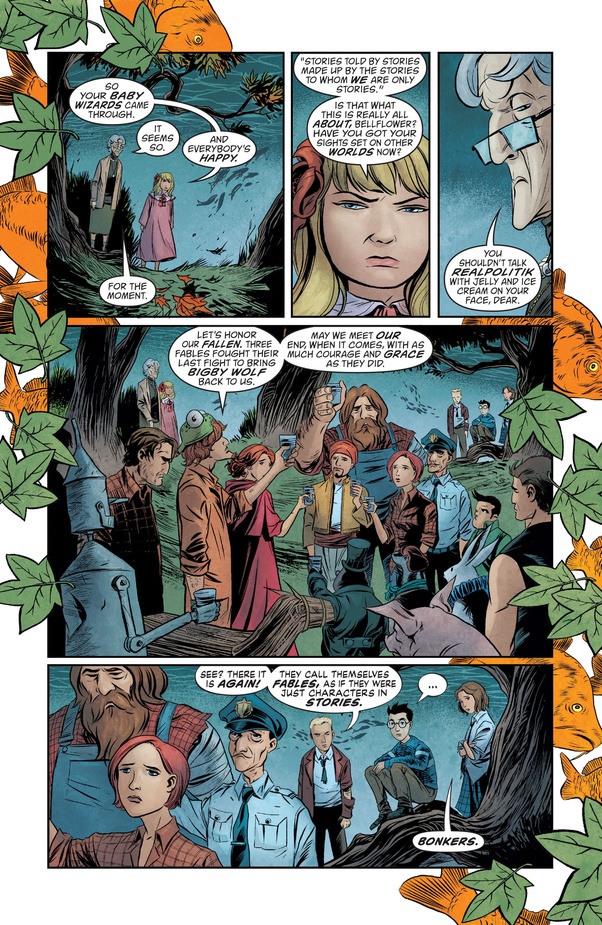 this contains all hyperplanes within just a single 2 dimensional frame in this world:

this means this is infinitely larger then the crack and oversphere 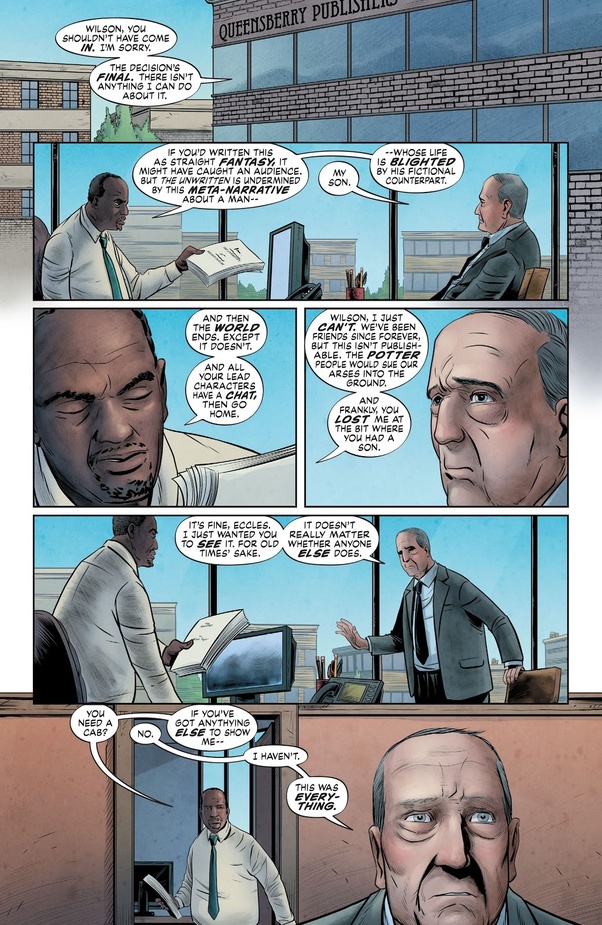 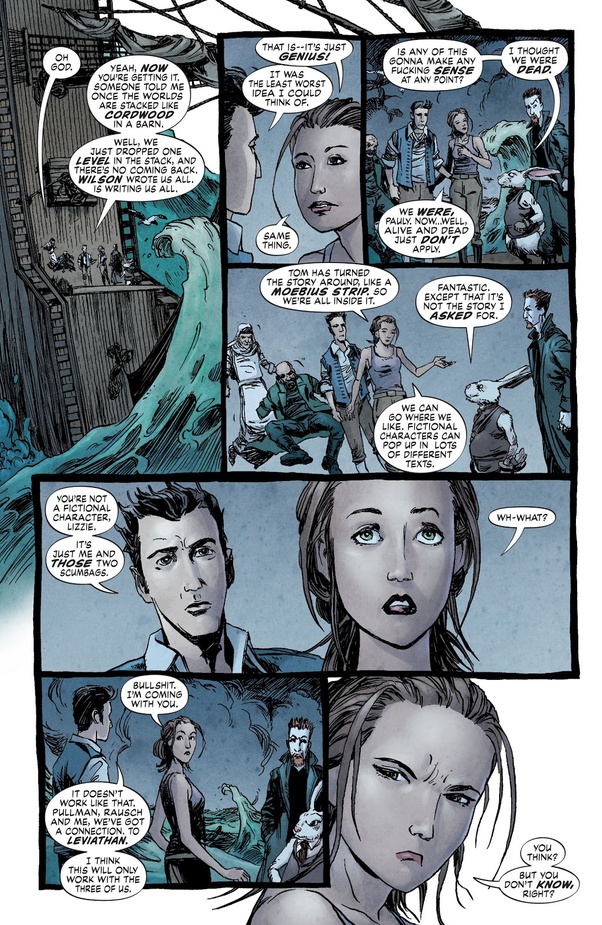 (which is not actually the whale, but the sea and the whale.) is the mind of the presence. (who he himself is also known as the writer, AKA the one telling the story.), as you can see here from 2000’s Lucifer: 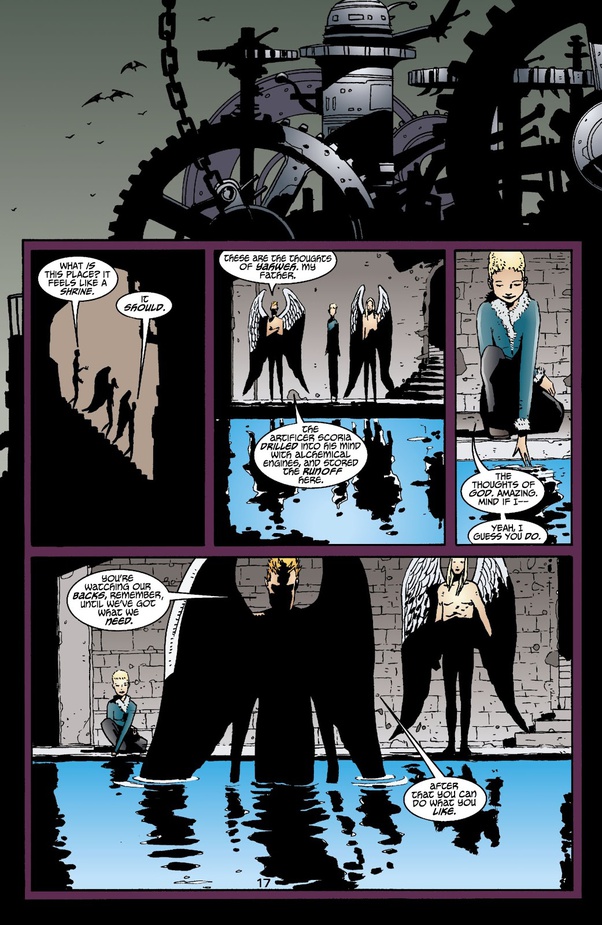 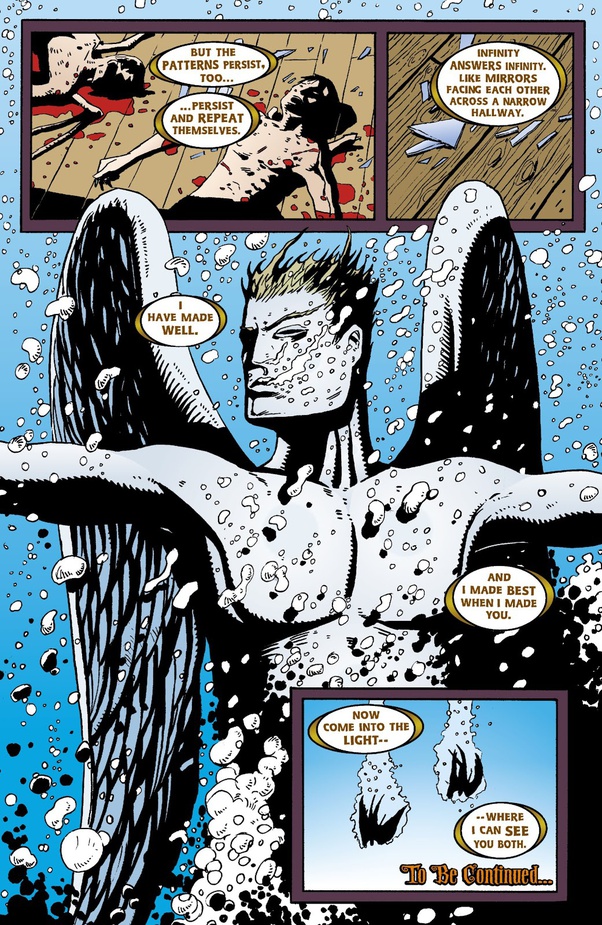 also another fun fact, this is the demon that opened up mind of the presence, and he even said how he did it: 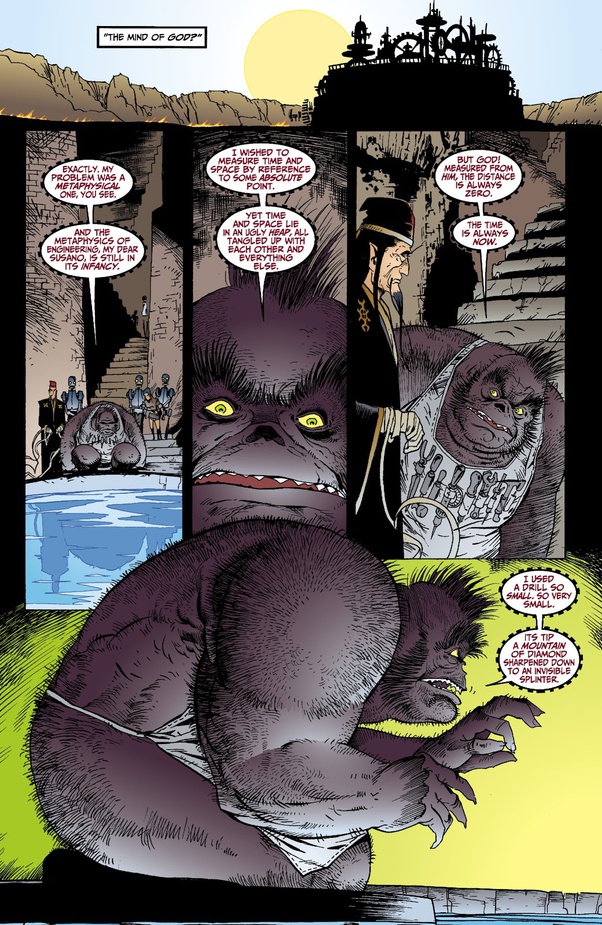 In a Grant Morrison interview, he mentioned that Overvoid contains all the verses in fiction including Marvel: 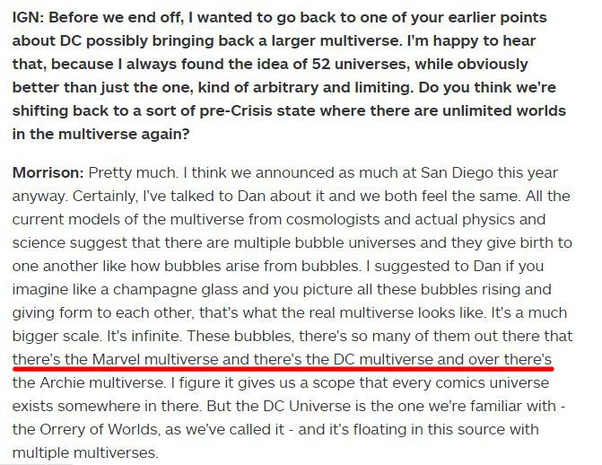 And Overvoid is part of The Presence: 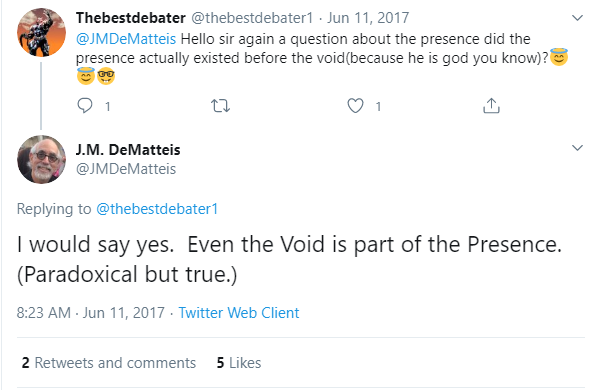 So it can be concluded that the HoI tier will not be able to touch Overvoid, The Leviathan of Stories, The Presence and Elaine Belloc.

Doom already formed his own Avengers in Avengers World 3. US Agent is on that team and so is Elsa Bloodstone. 3D Man is in there and some other people

Thanos I wish more people could see this
Last edited: 10 d ago.

Enternity10 10 d
i can turn any creature evil #

Invisible Woman @Savage I changed my vote because I know you have the knowledge of the Fantastic Four because that's your favorite team. I have nothing to debate about Iron Man I just thought he can win by sheer outsmarting. Anyways changed my vote friend

Hulk @Savage
1. Yes The Thing can trade blows with The Hulk, but his strength doesn't exceed Hulk's.
2. Like I said, Hulk's strength was able to break the fabric of reality and even shake the whole universe.
3. Hulk doesn't need to go World Breaker in order to break through her force fields.

Saitama (OPM) They are squirrels though

Saitama (OPM) How though? She did defeat Thanos but that was non canon

Invisible Woman But she would put up force fields right away, and there's no way he's getting by those. We're assuming they're trying to kill each other, so it's not like she'll waste a lot of time, but if she wanted to she could.

Fantastic Four None of that matters at all, the Thing and the Hulk fight all the time. In what world is Hulk a different tier than he is? Other feats are pointless when they go head to head constantly. Add on Sue and they stomp. Hulk can't break through her base shields until he's worldbreaker. Hulk lifting a celestial isn't very impressive when Sue has literally ripped one apart with sheer power.

Invisible Woman @Savage I think Iron Man could pull off the win if Sue is morals on. If she's bloodlusted I would give it to her but if this fight ever happened. I'm have to give it to Iron Man because Sue wouldn't fry Iron Man's brain right away.

Thanos Ok so I think he wins because he has went off against very powerful foes like ss, hulk, warrior madness thor who was amped with the power gem i wish i could send you scans but i don't know how to do it on this site
Ti
Tigerking2020 10 d
Fantastic Four vs Hulk #

Hulk @Savage Hulk held up a mountain, he held a planet together, destroyed an asteroid twice the size of Earth, punched time itself, lifted a celestial, and his blows can shake the whole universe and even break the fabric of reality. The Beyonder stated that the Hulk's strength is limitless.

Oh like his own Thunderbolts, but actually good. That would be cool. It could be with all the partly good villains, like Loki, Magneto, and Venom.

Evil Superman has happened plenty of times before

Fantastic Four What are you talking about? The Thing and the Hulk are portrayed as equals all the time