For example, when I'm doing a respect thread on this topic, it would be useful to be able to use bigger letters just to make it like title.

Brother Fusion No I agree I just wanna hear your explanation

@Galactus, I think it would be a good idea if we could use big letters for titles, it could be useful when we are doing respect threads.

GM Luke achieves a state of Oneness with the force.
''He took the steps at a lightning pace, burning his way through dilating membranes but in complete control of his momentum. Seen through the Force he was a maelstrom of luminous energy, a Force storm against which there was no shelter. And yet all his energy poured from a calm center; an eye.''

GM Luke becomes the very essence of an immovable object and not even a black hole at the center of a galaxy can move him
''But this time Luke was ready, he placed his own hand in front of Raynar's, rooted himself in the heart of the force. And when he did that he became the very essence of the immovable object. Nothing could dislodge him; not one of Lando's asteroid tuggers, not the Megador's 16 ion engines, not the blackhole at the center of a galaxy. Luke stood that way waiting, fully aware that the remaining bugcrunchers were moving into defensive positions.''

GM Luke is nigh-omniscient
"Bathe in this pool, and you'll have the answers you seek."
Luke raised a brow. "About Jacen?" he asked. "Or about Mara?"
"About whatever you seek," Ryontarr replied. "This is the Pool of Knowledge, where you will see all that has passed and all that is to come."

Luke killed a Fireworm (a creature that lives in the lava). 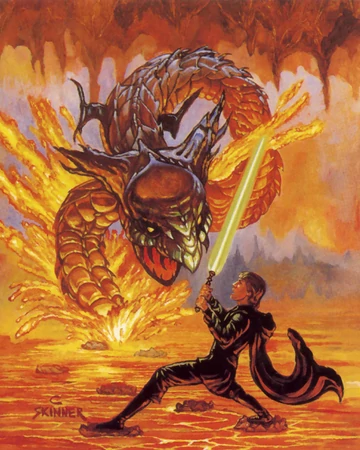 
Luke Skywalker (not Grand Master) supports an AT-ST from falling

So I put a link & it showed but after I left the page & went back it was gone. Is there a reason for this?

Galactus Galactus is a GOD

not voted Has supes ever beaten shazam without amps?cause shazam has.

Look. I have little to no knowledge on any other hero than what I've learned on the DB so far (thanks guys) & so far saitama is in my high tier list of powerhouses that I actually know.

Thor This wouldn't be a stomp at all.thor would barely win this.
BL
BLO 23 d
Thor vs Black Adam #

Well @Alien_X there's a theory going on (& sorta confirmed by the webcomic) that Saitama will become as strong as he needs to be in order to win b/c he broke his "limiter" https://youtu.be/OEAPEiuW97g?t=390
BL
BLO 23 d
Black Adam vs Superman #

Black Adam this goes to black adam.we already saw their fight.superman was angry while black adam was holding back but still managed to stalemate him without even using his lightning.shazam and superman has fought many times and were evenly matched but black adam easily overpowers shazam.

I also said it's purdy gouda, not the best

What about Tien Shinhan? And both Flash and Hulk are technically human.

I can literally think of like 15 characters that punch harder than Saitama off the top of my head.

Mandalorian vs Falcon and the Winter Soldier

Knock him out with a really strong robot like Android 16, bind him to an adamantium slab with adamantium cables, and throw him into the Pacific Ocean to drown him.

Can't we just kill him hand-to-hand?