Now, it's Thor, RKT, Old King Thor, All-Father Thor and Cosmic King Thor vs Pre Crisis Shazam. So, RKT steps up to Shazam, Shazam punches that shatters all his bones and RKT taps him on the head and he is instantly disintegrated.
Bi
Bigman999girl 1 d
Team Shazam vs Team Thor #

1
Team Thor What a dc fanboy, you haven't even seen a glimpse of any of team 2's heroes powers. I love dc and marvel equally, but I already know that even Old King Thor can solo the other team, the stats don't lie.

827
Team Thor No dragonball character has ever gone above low multiversal level.
Even zeno is low multiversal. Rkt is on a whole another level so is all father and phoenix thor. Xeno goku is a good opponent for guys like old king thor at max.

13.3K
Team Eru Iluvatar I just like a aslan
I mean I only read the first book,but he’s a literally god simba.

Neutral Love them both, so I can't decide 😥

Neutral I'm not huge up on the Vertigo side of DC or the more cosmic side of Star Wars. And the Tolkien/Lewis guys have a lot open for interpretation, so neutral vote for me.

839
Thanos (Heart Of The Universe) Thanos destroys him

Drunks 2 d
Melkor (With The Silmarils) #

839
After all didn't he only steal Silmarils even that didn't add any power other than hurting himself and being worn on top of his crown?

Neutral Red-Headed Actress (who does her own stunts) vs Red-Headed Stunt-Woman (who occasionally also does some acting).

219
Batman Even if the fight takes place without any preparation time, Batman would still whoop Iron Man's ass in a straight fight since he has consistently beaten stronger opponents without any special Bat-Suits something which Iron Man can't do. Let me ask you one question, has Iron Man ever beaten Avengers in a fight before just like Batman has beaten the Justice League?

876
Nyarlathotep Lucifer's manipulative tricks will not work on Nyarlathotep.

876
Neutral TOAA (True form) is NOT a factor there. the rest are left at a dead end, the battle is between One-above-all and the Writer.

Lucifer Morningstar @VonKonigsberg Thoughts and opinions on this one here or not?

1.4K
Thor Training and expirience as a warrior still counts and Mighty Thor got a couple of thousend years, Hulk perhaps 30 years.
The green giant got limited Intelligence and versatility, the Thunder god still have some powers as weather and light manipulation or the God blast.
If a human born scientist transforming to a behemoth may defeat a warrior born god there is something seriously wrong.
The human mutate versus the warrior god ?
The gods are superior in any mythology or fiction story and Hulk is not the first giant, troll or monster to be slain.

and galactus heralds have power cosmic i forgot that

The Power Cosmic is vast source of limitless, godly, cosmic energy and power primarily wielded by the god-like cosmic entity Galactus. The Power Cosmic allows Galactus to employ the available absorbed cosmic energies within him to produce nearly any effect he desires, including size-alteration, the molecular restructuring and transmutation of matter, the teleportation of objects—even entire galaxies—across space and time, the creation of force fields, the creation of interdimensional portals, telepathy, telekinesis, and cosmic awareness on a universal scale. Galactus has even been shown as capable of creating sentient life, resurrecting the dead, manipulating mortal souls and remaking dead
Last edited: 2 d ago.

they should make Assassin Creed animated they sucked at movie :D

every lotr characters have power cosmic :D what the hell only galactus have that power

Team Yawgmoth (God of Phyrexia) (MtG) I had been aiming to make this for a long time. Yawgmoth and Melkor are super similar in their goals and throwing em into a full scale war with everything possible felt like the only way to do it well.

50.6K
Can Someone Upvote Blind Justice, Bobcat, Bullet Biker, Firefox, Javelynn and Silencer, They're All Enemies of Hawkeye

vonKonigsberg 2 d
Vote for my battle (read description BEFORE posting) #

Hi all, I spent a long time getting all the pieces together for this battle, so I hope y'all take a look at it:
Arda vs Phyrexia

And I know a lot/most people aren't familiar with MtG lore, so I tried to make a brief explanatory thread on the battle about what exactly Phyrexia and Phyrexians are.

Team Yawgmoth (God of Phyrexia) (MtG) Posting all the stuff on Phyrexia took longer than expected. They are such cool villains in the Magic multiverse.

9.4K
Haha I got mentioned

Team Yawgmoth (God of Phyrexia) (MtG) Okay, final faction (and possibly my favorite) is Elesh Norn's Machine Orthodoxy. This white aligned faction is the current ruling group and has Elesh's ruthlessly effective war strategies to thank for that. Of all of the New Phyrexians, her forces are the most uniform in appearance and the most committed to her vision of what Phyrexia is meant to be. 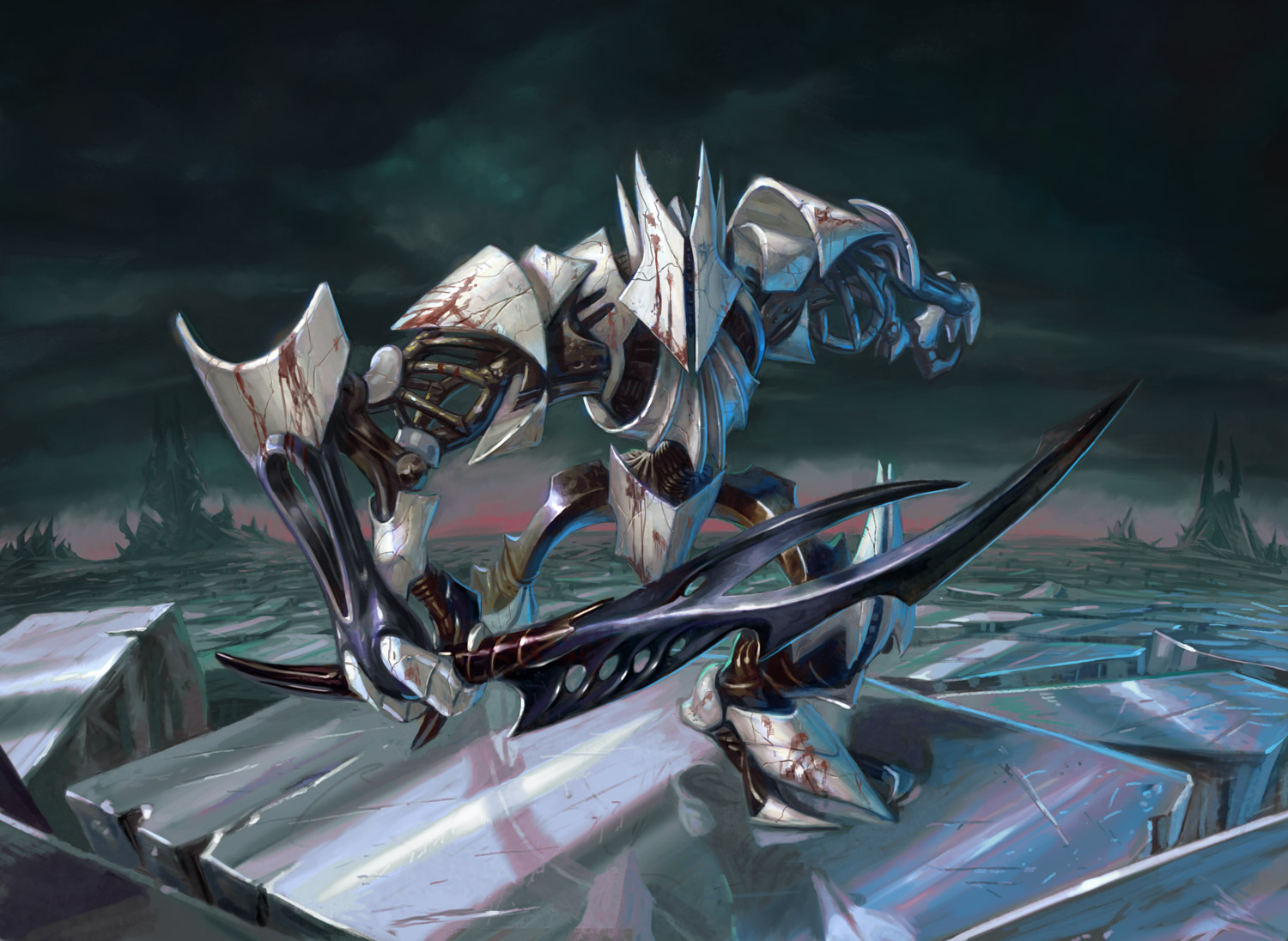 Her main army forces look like these Legionairres, whose porcelain-like metal (which you'll see in a lot of the faction's denizens) is both lightweight and durable, making them surprisingly agile and hard to kill. 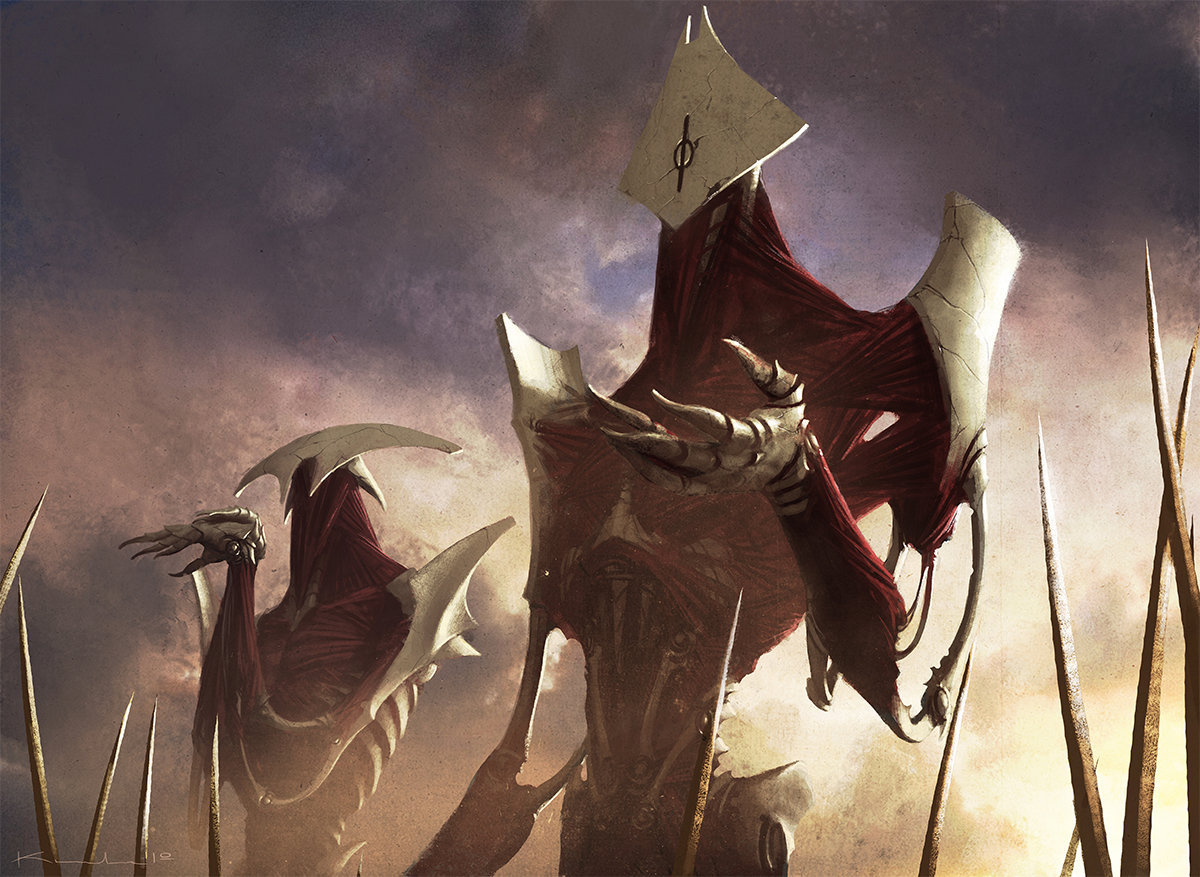 There are also her priests that seek to forcibly "convert" un-compleated individuals into the Orthodoxy. And by convert, I mean seal into walls and force the oil onto them. 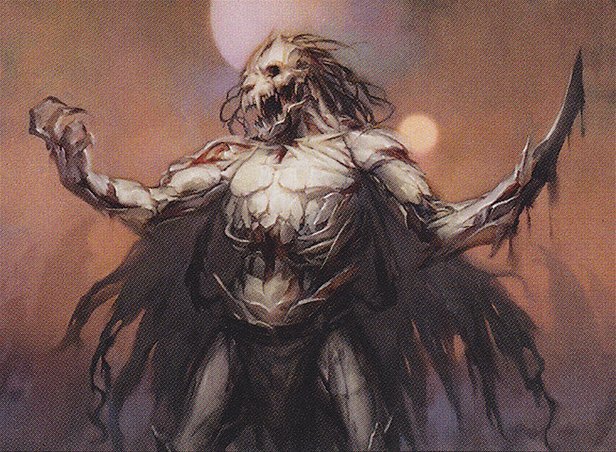 The fall of the Leonin to Elesh's forces has been quite a boon, as they provide a shock force to spread her message. 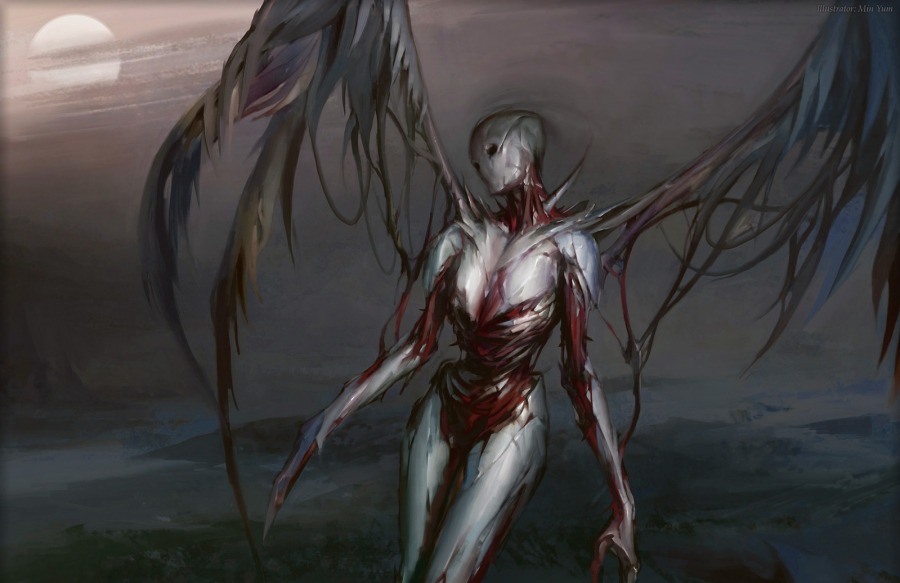 Never one to waste anything, Elesh has taken great efforts to Compleat all of the Mirran angels, who were once her most staunch opponents and are now one of her most useful tools on the battlefield. Atraxa was the last of the angels to fall to Elesh's power and has become a symbol of Phyrexia's inevitable victory.


Okay, phew, that was a lot more to type out than I expected. Hope this is helpful in y'all's decision making process. 😅
Last edited: 2 d ago.

1.6K
not voted Why? But what do you look for that it is a very balanced clash

Team Yawgmoth (God of Phyrexia) (MtG) Phew... Two more to go... Guess I'll do Jin-Gitaxias's Blue faction. They're mostly focused on 1000% ethical research and infiltration. Jin himself is really ambitious and is using his resources to find true perfection. Anyways, here's some of their fun totally not abominations they weild. 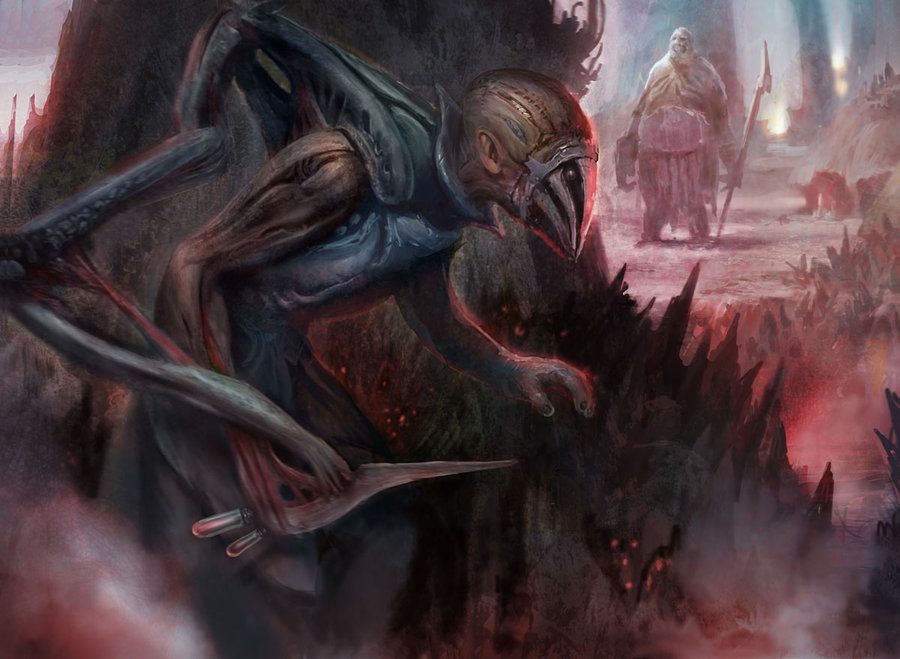 This is one of Jin's infiltrators. They're obviously intended for espionage, but this is a great one to show how thoroughly this formerly human's body has been modified by Compleation. 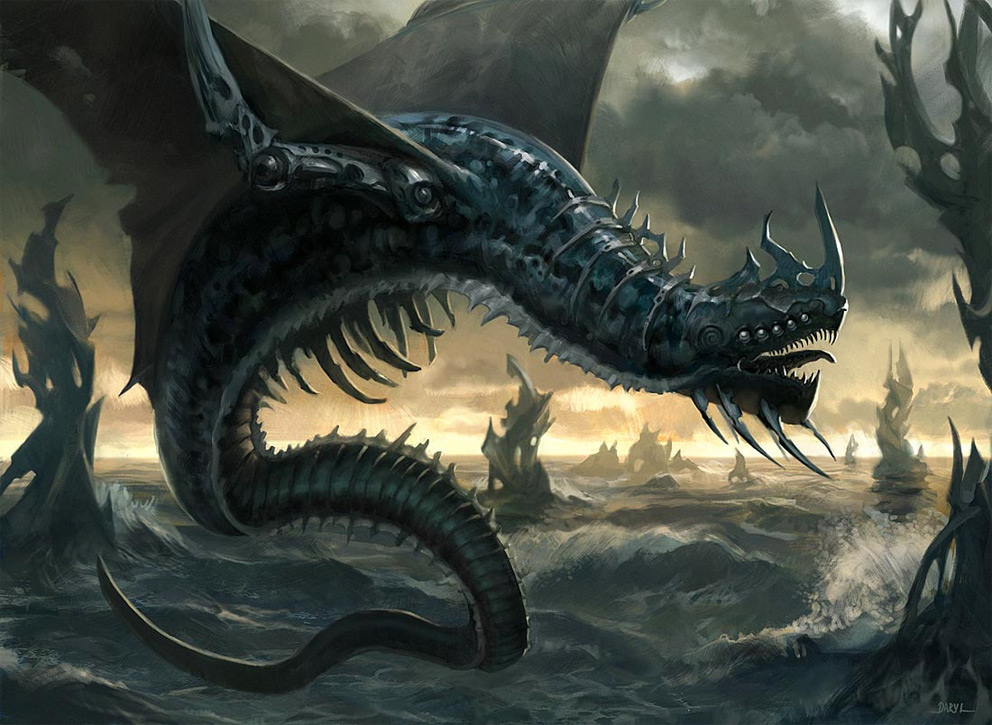 Jin also really likes his flying creatures, who he uses for surveillance and info gathering, as you can see by all of the additional eyes implanted onto the drake here. He really likes those drakes. 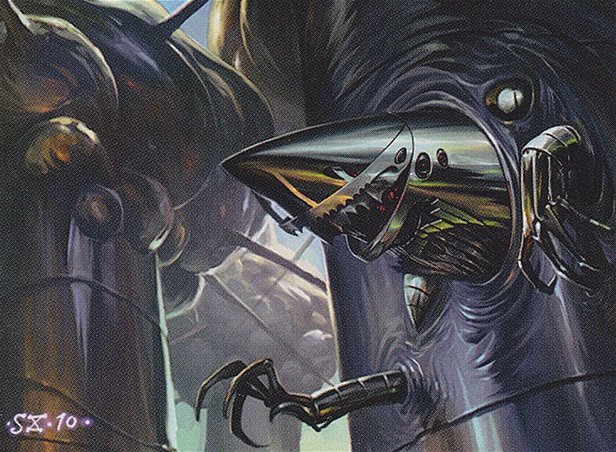 For when there's something Jin really needs and the infiltrators can't do the job, he can also send in these wonderful constructs that can straight walk through solid objects. Neat! 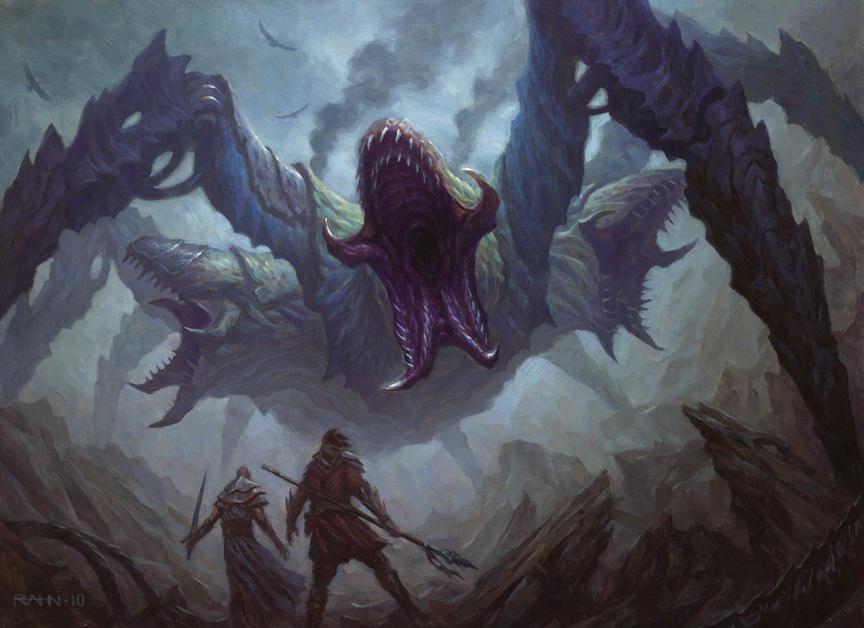 While it's tempting to assume the Blue faction is only good for support work, they also have these baddies (called Ingesters) they can deploy for when they actually need to throw down.

While definitely not the faction that hits the hardest, the blues are still incredibly dangerous.
Last edited: 2 d ago.