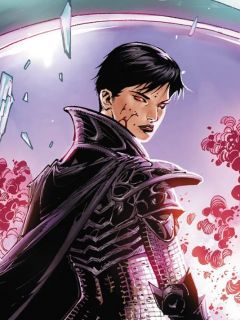 Faora Hu-Ul was a serial killer born on the planet Krypton. A self-professed "man-hater", she targeted only male Kryptonians and ran a concentration camp where she kept other Kryptonians as slaves. Faora Hu-Ul claimed over twenty-three lives before she was arrested. Faora was sentenced to over three-hundred years of incarceration inside the Phantom Zone - the longest sentence ever handed to a female prisoner, and the second-longest sentence over all. As Faora was trapped inside the Phantom Zone, she, along with many others, survived the destruction of Krypton. She met other Phantom Zoners including military leader General Zod and Jax-Ur. Jax-Ur's knowledge of Jewel Kryptonite technology paved the way for their escape, and they broke free of the Phantom Zone where they inevitably came into conflict with their home world's last surviving son - Superman.

During one incident, Faora separated from her fellow Zoners and used her powers to siphon some Phantom Zone mist to surround her body, making her appear as a true phantom. As a veritable "ghost", Faora masqueraded as the widow of an elderly man named Jackson Porter. She convinced Porter to take up residence at 344 Clinton Street in Metropolis, next door to Clark Kent, aka, Superman. From there, she began scheming against Superman, but Superman discovered her true identity and origin and returned Faora to the Phantom Zone.