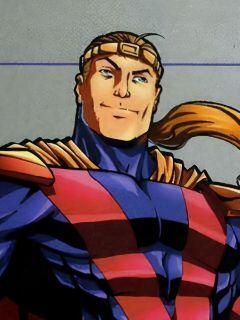 Cortez was bored with his life, even though he was wealthy and had high social status. He joined the Upstarts for excitement, a group of mutants organized by the Gamesmaster who were awarded points for killing other mutants. Cortez gathered a group of mutants who believed in Magneto's teachings and formed the Acolytes. He brought the group to Asteroid M, Magneto's orbital base, only to arrange for it's destruction and the death of the first wave of Acolytes along with their messiah.
Obtaining many points for the deaths of such powerful mutants, Cortez gathered a second group of Acolytes easily by playing Magneto off as a martyr. Neophyte overheard Cortez telling the Gamesmaster about how he killed Magneto, and caused the other Acolytes to abandon him.
When Magneto returned and was mindwiped, the Gamesmaster stripped Cortez of his points. Furious, Fabian concocted an elaborate scheme to regain them. He kidnapped Luna Maximoff, the daughter of Quicksilver and granddaughter of Magneto, and began a civil war on Genosha by encouraging mutates to kill ruling humans. Both the X-Men and the Avengers tried to stop him, though he was apparently killed by the new Acolyte leader Exodus.
Cortez resurfaced months later when Joseph assumed control of the Acolytes. Pretending to help Joseph assume Magneto's leadership role, his shemes were again unveiled. He then tried to destroy the X-Men with another wave of Acolytes, but eventually abandoned his own allies.
Later when Magneto was returned to his full mental capacity, he gave Cortez a chance to redeem himself. Weakened by trying to manipulate the Earth's magnetic field, Magneto needed Cortez's powers to keep him rejuvenated. Lensherr offered Cortez a place on the Genoshan cabinet, which he accepted. When Magneto attempted to obtain technology from Carrion Cove that would return his power levels to normal, Cortez betrayed him and helped the United Nations by augmenting rogue Acolytes to fight Magneto and his mutate army. His power levels faded during the battle for Carrion Cove, while Magneto returned to full power. Magneto finally got his revenge, using his new strength to repel Cortez fifty miles and smash him into the ground; dead on impact.