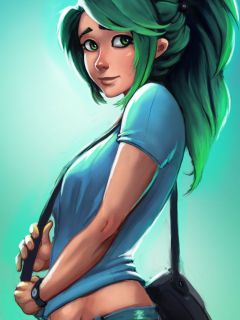 In a world without magic or mutants or metahumans or anything, a perfectly normal world, A 15 years old girl with a green hair found out that she is a magician. She was already good at card tricks but one day she found out that she can do actual magic. She was on her way home at 1am when a guy grabbed her and pulled her aside and then tried to undress her. She yelled and tried to kick and punch but of course nothing helped. Until she somehow fired lightning bolts from her fingers, it wasn't serious the guy was still alive but was hurt and now about 10 meters away, he took his gun and shot her. She tried to protect her self with her hand and the bullet was stopped midair, like it hit an invisible wall, and fell to the ground. The Rapist ran away and so did she.

About a year later she found in her locker a weird emerald gem, once she touched it she was telepoted to an old building in central London, and her hair was now greenish as well. She looked everywhere to see if there is someone there, no-one was there, and touching that gem again didn't help. She took a flight back home and found a different family living in her house, she went to her school and found a library. She went inside and saw the librarian and everyone else there moving their books telelinetically and practicing magic. She asked what's going on and people didn't understand why she thinks it weird they are doing magic. Then a guy touched her and they teleported somewhere. The guy explained that he is the sorcerer supreme, the guy who has all the magic in the world, and that she is the only one in the whole multiverse that is more powerfull than him because she is not from his world. He taught her magic and how to control the gem so she can teleport home every day and then back to his house to learn magic, she was a fast learner but one day when she came to her lesson with him his corps was lying there. She tried to find what could have killed him and in her searches she head about a monster who's magic somehow doesn't belong to the sorcerer supreme, she assumed that the monster is like her, from the non-magic world and went on a quest to find it.

She found Dr. Strange and together they gathered a team of magicians from all over the multiverse, they went on a quest to save and warn every sorcerer supreme but didn't have much success, Everytime they came they were either too late or came exactly in time with The Monster, and of course weren't able to stop him. When they came to Gandalf the White he told them that the monster can't defeat him and that he probably went to kill the Balor, the Balor might be an evil demon but if the monster kills him he will be the most powerful being in the multiverse and that can't happen, Dr Strange, Emerald, the Scarlet Witch, Zatanna, John Constantine, Penny, Hellstorm, Quentin Coldwater, Alice Quinn, Julia Wicker and 3 more magicians from other universes that no one knows about (i.e. random universes that don't exist in fiction, one of them is Casey one of my less interesting OCs) all went there, the Balor and the Monster where already fighting and the Balor almost killed the Monster, but Constantine was so affraid of the Monster that he decided to join him, he helped the monster against the Balor and they killed him, the group managed to escy back to the marvel universe but not before the monster killed Zatanna, Julia and Casey.

Back in the marvel universe, Alice and Quentin decided that this is not for them and went back to their universe, but before they did that they taught Emerald the Rhinemann Ultra, a magic spell that can kill gods, but will also kill the caster. Not knowing that Emerald has the spell, Dr Strange called Nico Minoru and Brother Voodoo, they trained for a few days when John came, very hurt, and said "He's coming" before collapsing.

The monster came and they fought, they had no chance, the monster killed another unknown magician, Brother Voodoo and Nico. Emerald so that there is no other option and used the Rhinemann Ultra, they won but only at a great cost. Constantine and Penny both fell in love with Emerald and weren't willing to accept her death. They went on a quest to find a spell that will bring her back, they went through time and space and found and alternate multiverse, were Emerald is somehow still alive after they killed the monster, apparently, in that universe Penny was the one who used the Rhinemann Ultra and died instead. Emerald of the alternate universe asked him to stay but he couldn't, he knew this would ruin the space-time continuum. They said last goodbye and he and John went back. It's been years and Penny couldn't stop thinking about her when he decided make his multiversal the other multiverse. He went back in time and told Alice to teach him they Rhinemann Ultra and used it instead of Emerald.

Emerald continued her life not knowing what he did for her, actually the only one who did was Alice. She was the apprentice of Dr strange for 2 years but then they faced another big threat, Parallax, the God of magic. Ever heard of Nabu? Well he to Parallax is like what Dr Fate is to him.

Nabu, controlling the body of Kent Nelson, came to the sanctum sanctorum, said "the god of magic is back" and collapsed, when he woke up again he explained Strange and Emerald that the God of Magic is one of the elder gods that created the universe, he was the one who created magic, he became so powerful and dangerous that the presence (or the one-above-all, or jehovah or whatever you want to call the main god) had to lock him, no he is finally back and he want to kill all magical creatures (sounds familiar?) He already killed Michael Demiurgos and the spectre, no one know where the elder gods are and Lucifer is hiding, there's nothing to do. Dr strange says they have to assemble a team, and Emerald says that the team should be built from non magical people cuz he can just take away magic, they call sentry and iron man and wait until something happens. The next day they encountered a guy called Lord Prodigy (credit for the awesome @DarkProidgy) who claims that he is the king of a realm called the Over World. The realm is full of magic so of course the God of Magic came there, Lord Prodigy managed to escape by the skin of his teeth and got to the Sanctum Sanctorum for help.

They were not ready to fight the GoM, the most they could do is cast a spell that will hide them from the GoM until he senses it. After a week of hiding Nabu couldn't stand it anymore and broke the spell, the GoM came minutes later, took away all the magic, killed the sentry and Nabu. Iron Man used a teleportation device to teleport strange Emerald and Lord Prodigy away.

They understood that their only hope is to find the elder gods but they had no idea how. But then Lord Prodigy remember that he once met someone who once met an elder god. They teleported to Brakebills, which is located in the Fillory universe but on Earth and not on Fillory, where they found June Peterson, a magician from the Over World who went to learn at Brakebills. June was happy to help but didn't think she'll be able to call Hades she she doesn't have enough energy to cast that spell, a spell like that would take all the energy from the Eye of Agamotto, Doctor Strange decided that if they don't do that they all die, so he gave up the Eye, June destroyed it and took the energy, then summoned Hades. Hades was very happy to meet June again but was too afraid to join their fight, claiming that he has no chance against the GoM. He was only willing to take them to the elder gods' location, where they saw they mighty Presence, father of all gods and they creator of the multiverse. He of course was not willing to help, the gods decided to give up and create a new multiverse. None of our Heroes were willing for that to happen. The Presence said that if the god of magic dies magic will go wild and destroy even the gods. So strange made a deal, if the gods help them fight the GoM, he will be they new sorcerer supreme of the multiverse, and make sure magic is controlled. The gods were willing to help and they managed to kill the GoM. Dr Strange became the new sorcerer supreme. Lord Prodigy went back to his universe and Emerald (since she didn't have anywhere else to go, she'd still visit her family but she couldn't live in a world without magic) went with June to Brakebills to be a teacher (June just finished her last year and since Emerald was also old enough to finish and definitely trained enough she decided to teach as well) together with Quentin, Alice and McGonagall they made Brakebills more Hogwarts style, and taught the student how to be good and fight evil. Emerald was the defense against the dark arts teacher, she went with her students to many trips accross the multiverse. She also fell in love with June and together they fought Reynard the Fox, he was too powerful for them raped and almost killed Emerald, they decided to keep the baby and not let his father define who he is. Emerald and June are now 24 with a one year old baby boy. Teachers at the best school of magic in the multiverse.