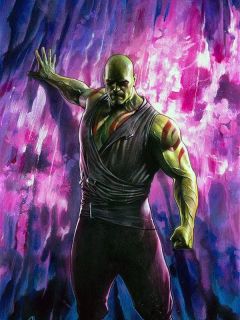 Drax the Destroyer's powers and abilities

Drax is superhumanly strong, though his strength is currently only a fraction of what it once was in his most powerful form. At his peak, Drax can currently lift around 50 tons.

Drax superhuman musculature produces less fatigue toxins during physical activity than the musculature of a normal human. As with his strength, his stamina is currently considerably lower than it once was. He can exert himself physically for at least several hours before the build up of fatigue toxins in his blood begins to impair him.

Drax's body is harder and much more resistant to physical injury than a normal human body, though his physical resistance is much lower than before. He can still withstand powerful energy blasts, exposure to temperature extremes, and great impact forces without being injured. Drax can withstand the rigors of surviving in a vacuum practically indefinitely and requires practically no food, water, or oxygen in order to survive.

In spite of his great physical resilience, it is possible for Drax to be injured. However, his physiology possesses the ability to heal injuries that would otherwise be fatal with superhuman levels of speed and efficiency. The limits of his accelerated healing is unknown. For instance, it isn't known if he can regrow limbs or regenerate missing organs, or regenerate tissue that's been completely destroyed.

Drax has proven to have a superhuman olfactory senses. During the Annihilation event he is able to determine that Nova is a human like Cammi by sheer smell alone. Drax has also used this ability to recognize when weapons are about to be discharged in his area. He is asked if this acute sense has picked up any of the cloaked Skrulls[41].

During the "Annihilation" event, Drax displayed the ability to generate a type of form fitting "aura" around his body. The precise nature of this aura, or whatever it actually is, is unknown. While surrounded by this aura, Drax was able to punch through Thanos' chest and rip out his heart. It is possible that the aura can at least temporarily increase his physical strength to levels at least approaching his former level of strength. Since he only generated this aura while in close proximity to Thanos, it is also possible that he can only generate this aura when Thanos is near since Drax was originally created to destroy Thanos to begin with.

He possesses a low-level form of cosmic awareness that allows him to track Thanos.