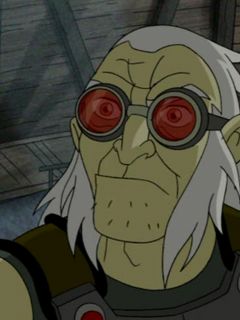 Dr. Animo was once a promising researcher in veterinary science. His career was cut short when it was discovered that he was performing twisted genetic experiments on animals. He had hoped that his research would win him the Verities Award, which is an award in veterinary science. Because of the nature of his research, he lost the award to another doctor, named Kelly. This drove him mad and he went off the map for five years until he could perfect his research. Because he locked himself indoors for five years, his skin and formerly brown hair turned pale from overwork and lack of exposure to the sun.

Sometime before his first appearance in the show, Animo watched a TV report showing Ben as Diamondhead saving a camp from a giant robot. This inspired him and led him to look for a way to create his own minion monsters.

Animo eventually appeared in Washington B.C., where he created a device called the Transmodulator, which gave him the ability to mutate animals into twisted giant versions of themselves. He then was able to upgrade it so it could reanimate dead cells, literally bringing dead animals back to life, although his reanimated monsters were actually zombies. Using his new army of animals, he intended to kill Kelly and get the award he had lost, but Ben eventually destroyed his Transmodulator, reversing its effects. Animo was then arrested.

He appeared again in the episode Dr. Animo and the Mutant Ray, where he created a much larger version of the Transmodulator using the broken-off faceplate of the Omnitrix and a large telescope in an abandoned astrology lab. This version mutated living creatures with alien DNA, creating odd mixtures of alien and terrestrial creatures, such as a Heatbat. He had also managed to turn Grandpa Max into a Stinkfly-larvae type creature. Before he could complete his plans to use a satellite to shoot the ray all over the world, Ben stopped him with Gwen's help. Since his mutants (with the exception of Grandpa Max) were never shown being cured, it is possible that they are still around. For some reason, his trademark giant frog is also present, though he may have simply re-mutated it sometime after his original defeat. How and when he escaped is unknown, though he could have used a similar tactic to the one he used in Divided We Stand.

In Divided We Stand, he escaped what seems to be Alcatraz Island on a mutant seagull (he had trained the seagull to smuggle in parts he could use to build a Transmodulator and then mutated it) and captured one of Ben's Ditto's to access the DNA stored in his Omnitrix. Using this DNA, he created an army of self-replicating Lepidopterran mutants, but they were destroyed and he was captured again. Afterwards, Grandpa Max deleted all of his computer files, preventing him from using any more Omnitrix DNA in his experiments if he escaped again.

Animo briefly appeared at the beginning of Secret of the Omnitrix, where he captured Max and Gwen and created a dangerous bomb. Although he escaped, Ben destroyed the bomb, unintentionally causing the Omnitrix's Self-Destruct Mode to be activated.

Animo briefly appeared at the end of Destroy All Aliens, where he and his mutant frog attack Ben, Gwen, and Max while they were on another road trip.

Animo makes a brief appearance at the end of Goodbye and Good Riddance, wearing an ape-like exo-suit, and leading a group of animal mutants towards Ben's school.

Five years prior to Omniverse

In Evil's Encore, Dr. Animo used Technobugs to take over the Plumber's HQ at Mount Rushmore. His goal was to spread his mutation ray all over the planet by hijacking the Plumber's network of satellites. He was stopped by Ben, Max, and Gwen when they destroyed his Technobugs and sent him to prison.

Four years later, during the time of Ben 10: Alien Force, Dr. Animo is found in the Null Void (he purposely went in to find new animal species but couldn't get out) where he assumed control over the Null Guardians and took on the alias "D'Void" and never went with "Dr. Animo" again. He plans to open a wormhole to the real world to use the Guardians to take over the Earth, and he forces the citizens there to gather a mineral that not only powered his drill but gives him immense strength and near invulnerability (to the point where a direct attack on him was completely ineffective). In Voided, his plans are foiled by the joint efforts of Helen, Manny, Ben, Max (codenamed "The Wrench"), and a group of other Plumbers' kids (including a Havoc Beast and a Vulpimancer).

Animo later returns in Ben 10: Ultimate Alien, having somehow escaped from the Null Void and going by his true name again.

At the beginning of Escape from Aggregor, he used a device to take control of the Yeti in the Himalayas and create a "De-Evolution Bomb" to turn everyone in the Southern hemisphere into yetis (which Ben, Gwen, Kevin and even the Yeti thought was a stupid idea).

Using Brainstorm, Ben was able to turn his mind-controlled Yeti against him, while Kevin and Gwen disabled the bomb. He's then most likely sent back either to the Null Void or a normal jail. He has also returned to his original appearance (for the most part) and voice.

Animo returns in It's Not Easy Being Gwen where he attempts to raise an army of his signatured mutated Frogs using the enhanced version of his telescopic Transmodulator. He is eventually defeated by Gwen, Ben and Kevin. After being brought to the authorities Animo was released from prison a few months later on good behavior.

Dr. Animo has removed the top of his skull and replaced it with a glass dome in order to have better control over animals and other self-upgrades. He has apparently developed a hobby of cutting up and stitching together stuffed animals (and in future episodes, talking with them, showing that between Ultimate Alien and Omniverse, Animo's blatant insanity has only gotten worse), his cell full of them.

Animo returns in It Was Them where from his cell, he has been mutating ants and using them to construct a sky-scraper sized base with a transmitter to mutate every ant on earth. He was also making a "King Ant" costume, which is armed with flame throwers. Ben and his new partner Rook come in and fights Animo and his army. He is later attacked by Khyber's Pet in the form of Mucilator.

Animo attempts to control the beast, but only provokes it into attacking him. Ben gets Animo's ants to attack Mucilator and Rook is able to kill the ants by creating an anti-ant bomb from Animo's equipment. This forces a retreat from the beast and allowing Ben and Rook to return Animo to his cell.

In Evil's Encore, Animo, five years after his first attempt when he was 57 years old, again attempts to use a Technobug to escape, take over the Plumber's base, and mutate the world, but his plan is thwarted before it even got started as Blukic eats the Technobug as a snack.

In T.G.I.S., he had somehow managed to escape Plumber Prison and had revived V.V. Argost with a mixture of cryptids as a new body. Apparently, the process had taken 3 years, the delay being attributed to fighting Ben Tennyson and his time spent in jail. He later decided to capture Fiskerton, to research him and add him to his collection, but he and Argost ended up defeated by Ben, Rook and The Saturdays. He was last seen running off after his control over the Chupacabras was destroyed.

In Animo Crackers, he is seen back in his cell at Plumber Prison, indicating that he had been recaptured. Due to the actions of his future self, he manages to escape and joins Dr. Animo from the future to try and steal a huge repository of DNA. However he is thwarted by the actions of Ben, Rook, Spanner, and arguing with his future-self. In the end, he is recaptured with his memory of this event erased by Gutrot.
Superhero Class