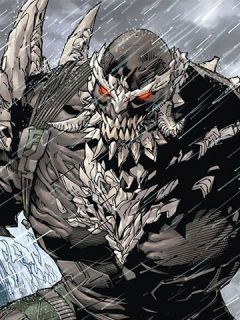 Doomsday was created and evolved through cloning an infant and having it killed over and over again by one of the most dangerous species of the universe and in one of the harshest habitats in existence, prehistoric Krypton. As such, he returns to life every time he dies and becomes near invulnurable to what killed him before. His entire body is built as a defensive structure which continues to arm itself the more it is damaged.

Superman used a sound gun to paralyze Doomsday, but Doomsday's auditory canals closed making him impervious to the weapon. Waverider paralyzed Doomsday once with "chronal" energy, but the second attempt backlashes on him.

He also has a highly accelerated healing factor that allows him to heal and regenerate from most damage almost instantly.

The monster can replicate and store the special abilities of any super-beings in his immediate proximity using "Absorption Cells".

With his strength, Doomsday can easily overpower and kill humans and other aliens like Kryptonians, and can bend and break through reinforced steel, destroy impenetrable barriers, and can lift extremely heavy objects, and uproot trees and buildings/structures as well as decimate them with his might. He is strong and powerful enough to overcome entire rosters of superhumans, like the Justice League.

Doomsday is almost completely resistant to all forms of physical and mental types of harm, and as such, bullets bounce off him, rockets, lasers and bombs will not leave a mark on him, and high-voltage energy emissions cannot penetrate through his tough hide.

He can survive in space and can even operate while in the direct presence of space vacuums, vortexes and wormholes, and he does not require oxygen, water, or any form of nourishment to maintain himself.

Doomsday can take part in super-powered battles for months on end. He fought Superman through Metropolis for days of physical combat until even the Man of Steel was broken.

Most surprising is his speed for his bulked size. In a matter of moments, Doomsday managed to render most of the Justice League incapable of fighting.

He was incapable of flight but due to his extremely dense muscles in his legs, he can leaps miles at a time. Superman took advantage of this in their first battle by attempting to keep him airborne. He also used it to his advantage when he deposited Doomsday in a lake to slow him down.