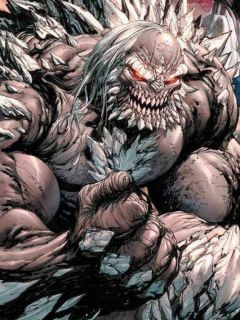 Eventually, after passing through a wormhole, Doomsday's asteroid was accidentally found by a deep-space scavenger ship. Upon closer examination of the peculiar-looking drifting rock, the ship's crew retrieved the object, hoping to find something of value. The scavenger vessel happened to be on a route to Apokolips, the home of the now-powerful tyrant Darkseid, empowered by the fabled Omega Force long after his first encounter with Doomsday. Doomsday was fully rested and, after slaughtering the crew of the salvage ship, found himself landing on the harsh world. This was to be the setup for a final showdown between Doomsday and Superman, who had been uneasy about the possibility of Doomsday's resurrection. With the help of his Justice League contacts, Superman procured a Mother Box, a sentient computer, after Darkseid's servant Desaad contacted Earth about a problem on Apokolips.

Unknown to Superman, Doomsday had faced and beaten Darkseid in single combat, even after withstanding the full effect of Darkseid's Omega Beams, and was laying waste to Apokolips. Unfortunately, before Superman could deal with Doomsday, Desaad opened a boom tube to Calaton—the first world where Doomsday was successfully defeated—and sent Doomsday through, to what he believed was his defeat at the hands of the Radiant. Doomsday was able to adapt, however, and overcome any opponent because of the process by which he was created, so, although the Radiant had defeated him once, he would not be able to defeat him again. Likewise, even though Superman had killed Doomsday once before, he was unable to do so again. Superman, while knowing this — having been filled in on Doomsday's history by the time-manipulating Waverider — was obsessed with stopping Doomsday and followed him to Calaton. He fought Doomsday again with the help of the Mother Box, but, despite it providing him with extra weapons such as an ultrasonic gun and an energy sword, Superman met with defeat as Doomsday's evolutions rendered him immune to Superman's attacks, such as his auditory channels being sealed by new bone growths or his knuckle-bones being able to shoot out of his body to 'pin' Superman in the air. Eventually, with his left arm having suffered a compound fracture and most of his weapons lost, Superman was forced to use one of Waverider's time travel devices to leave Doomsday stranded at the End of Time, where Doomsday met the one force he could not overcome: entropy. Upon returning Superman to the present, the Mother Box healed Superman's injuries and then "died." On Apokolips, Darkseid became fascinated with Doomsday's abilities after learning his origin from Waverider.