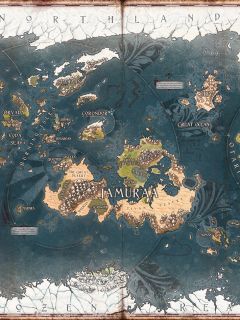 Dominaria is one of the most storied planes in the Magic multiverse, having had numerous devastating conflicts take place within its boundaries from the Elder Dragon War to the Phyrexian Invasion. These events often end up affecting the entire multiverse, as the events leading up to the Mending had broken planes such as Kamigawa and Ravnica. Due to this, Dominaria is often called the Nexus of the Multiverse. All of Dominaria's physical plane has not been fully mapped, but what has been shows it being at least 2.5 times larger than Earth. It includes at least 7 massive continents and dozens of smaller land masses scattered throughout. The physical plane also had two moons (one of which was destroyed) and was part of a solar system with one star and at least one other planet called Jinoue or the Evening Star. Dominaria also has at least a dozen constellations, one of which (The Arms of Elysium) contains 40 individual stars.

No connections to Dominaria found.