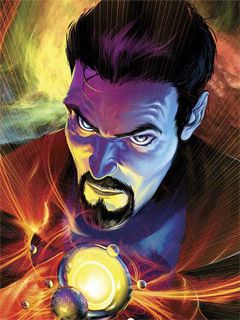 Dr. Strange is the Sorcerer Supreme of Earth's Universe; he has unparalleled mastery of the mystic arts, which he uses to defend his reality from otherworldly threats; his primary magical patrons are a group of entities known as "the Vishanti." The Vishanti are a trinity of godly beings comprised of Agamotto, Hoggoth, and Oshtur. Although he has, on rare occasions, called upon the power of demons such as Dormammu; Strange more frequently did so before he realized Dormammu's true dark nature in the earlier issues. Doctor Strange is potentially the most powerful being on Earth and one of the most powerful beings in the Universe. He has once stated that he can kill a mortal with the twitch of a finger. Eternity, the sentience of the Marvel Universe, has described Strange as "more powerful by far than any of your fellow humanoids", narration has described him as "the mightiest magician in the cosmos", and the Stranger considers him on a level with cosmic entities.

By manipulating the ambient mystical energy of this universe, Dr. Strange can perform a great many functions. Commonly this is seen as energy bolts that range from low power to planet destroying he uses this mystical energy to cast spells of a near infinite variety.

Dr Strange has banish many types of creatures and humans to other dimision but the extent of this is only possible as long as the 'Banish-ers' magic is greater then that of the 'Banish-ees' magic during the banishment.

Doctor Strange can fly using magical energy but has since abandon it. (Assumingly for the Cape of Levitation and the wastage of his magic.)

Strange has frozen, slowed, and traveled through time. The limitations of this are only possible through extreme concentration.

He can also use this mystical energy to cast spells of a near infinite variety. These spells seem to be quicker to perform but lesser in power than spells using divine energy. Strange has used his magics altogether to become alter his clothing through minor molecular control, absorb nearly all forms of energy, control and manipulate elements, Ect.

Dr. Strange has also been shown to amass as much wealth/gold as he desires using magic, as he has done to pay debts.

Dr. Strange can channel the virtually unlimited extra-dimensional energy of nigh-omnipotent mystical and non-mystical beings in multiple dimensions (known as Principalities) to empower his spells. This can take the form of standard spells ("Crimson Bands of Cyttorak") or just stating what he wants to occur and channeling some being to make it happen. It is unknown at this time what debt, if any, he incurs by invoking the powers that be. There is no strict quid pro quo (as the simple acknowledgement and invoking of the entity increases the entity's own powers, inexplicably), though some entities will feel he is obliged to heed their call when they need help in their conflicts as did the Vishanti.

This ability to be a conduit to multiversal power sources has given rise to the phrase "Dr. Strange is as powerful as the god he invokes."

Doctor Strange's powers typically come from one of three divine sources: The Vishanti (a trinity formed of Hoggoth, Oshtur, and Agamotto), the Octessence (a group of eight beings, consisting of Balthakk, Cyttorak, Farallah, Ikonn, Krakkan, Raggadorr, Valtorr, and Watoomb) and other beings who owe him a debt (this includes Satannish and even Dormammu). However, certain abilties of his stem from more obscure sources, such as the Faltine, the Seraphim, Cinnibus, Sheol, Ikthalon, Denak, Cyndriarr, Munnopor, Morpheus, Dyzakk, the Olympian deities (such as Poseidon and Hades) and others.

By sheer force of will "take" the power of another entity. This does not require the use of a spell. He used this ability against Arioch and Shuma-Gorath. The fact that Stephen can do this is a testament to his incredible will-power and strength of mind. This is considered black magic and as such he rarely employs this. Also when taking the powers of celestial entities he absorbs the mind and assumes their duties and roles in the dimension in which they exist. If his will falters, he can lose all sense of self.

Although Dr. Strange primarily uses spells that are considered 'white magic', he will use spells from other disciplines such as black magic, elemental magic, and catastrophe magic when necessary.

In his astral form, Doctor Strange does not need to breathe, eat, drink or sleep, is unrestricted by physical laws (for example, Strange has flown beyond Earth’s atmosphere, defying gravity with ease to speak with Iron Man), is invisible (though can be seen by any if he wished it so), intangible, and incapable of being harmed by all but the most powerful and rigorous of mystic means. As no physical laws are meaningless on the astral plane, Strange is able to use it to traverse at virtually any speed desirable (Strange has reached Saint Missouri, Missouri from his Sanctum Sanctorum in Greenwich Village, New York in "a few brief seconds" thus, as well as traveling at the "speed of thought" through outer space ).

Dr. Strange's lifespan has been extended and his fear of dying subsided in a manner similar to that of his mentor the Ancient One, due to a successful contest against Death. Though he can still be killed and even physically wounded he cannot succumb to any medical diseases. Doc passed a test by the Ancient One and defeated Death, or more accurately, accepted Death. As a result, from that moment forward, Doc stopped aging. "Death may come only from without, in battle-- and not from within." The Ancient One had once passed the same test himself, and lived 600 years. From that moment forward, a glowing ankh appears on Doc's forehead when he is in a situation of great danger and his death is imminent, "when Doc most needs a reaffirmation of life.