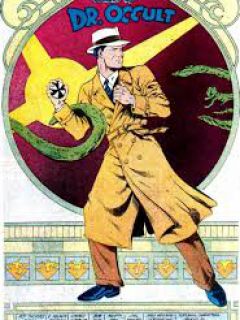 Doctor Occult, a.k.a. the "Ghost Detective", is a private investigator who specializes in cases involving the supernatural, and whose recorded exploits started in 1935. But the story began 36 years earlier.

On December 31st, 1899, somewhere in the American Mid-West, a satanic cult attempted to summon Satan to Earth at the moment of the opening of the new century. For that, they offered him the sacrifice of two infant, untainted children, a boy and a girl, "stolen from simple god-fearing folk".

At the moment of the beginning of the new year, someone was indeed summoned, even before the worshippers had had a chance to sacrifice the children. This, however, was not Satan, but a diabolic entity calling himself Koth. He immediately declared that the souls of innocents were of no use to him. He wanted souls stained with sin, polluted by corruption. As the nearby church clock struck twelve, Koth devoured all members of the cult, sentencing them to eternal damnation in his own abysmal realm. After that, he turned to the two infants to slaughter them, only to find them gone. Puzzled, Koth then withdrew himself from the living world.

What had happened was a man named Zator, a disciple of the Seven. Zator had found the children, managed to hide them from Koth, and then traveled through the dimensions to the far side of the Earth and the hidden Citadel of the Seven, a mighty organization of mystics. At first, the Seven were not at all amused with Zator bringing the infants to the Citadel, but after measuring them, they found innate mystic abilities in them, and let them stay under Zator's care.

As they grew older, Zator educated the children - whom he for some reason called "Doc" and "Rose" - in many of the ways of the Seven, giving them abilities far beyond mortal men. Exactly what this education meant of has never been revealed, but it is known that Doc in his youth spent a lot of time in the colorful land known as Faerie, and that might have been during this period. It is also known that Doc and Rose were attracted to each other early in their lives, but that the Seven condemned any amorous relationship between the two of them.

Upon reaching puberty, the boy was given the mystic Symbol of the Seven, and the name "Doctor Occult". The girl got the fuller name of "Rose Psychic" or “Rose Spiritus”. On the same day, they were also told to leave the Citadel, part from Zator, and use their abilities to battle evil in the world.

Travelling from the Citadel to China and then by boat to America, the two young magicians soon found themselves in New York City of the 1920s. Taking the name "Richard Occult", Doc started studying science at college and further schools, eventually earning the "doctor " title formally as well. Rose was still by his side, studying humaniora at the same time.

In 1935, they started a supernatural detective bureau together, hoping to fulfill the mission the Seven had prepared them for. Although nobody took their business seriously in the beginning, they finally got to prove themselves solving the case of a mass murdering vampire. Their career continued with many strange cases and meetings with adversaries such as the Cult of the Wolf, the Denizens of the Astral Plane, the Spectral Killer, and the Lord of Life, the latter of which managed to turn the Doctor himself into a mindless zombie before being stopped by Rose. At first, the police was skeptical, but seeing the results, they - and especially a Detective Captain Ellsworth - started cooperating with Doc and Rose on cases paranormal.

In 1936, the devilish Koth returned from his realm, this time almost overpowering the Seven. Had it not been for the interference of Dr. Occult and Zator, they would all have perished. Koth managed to flee, and the Seven quickly assigned Doc and Zator to secure an ancient Egyptian belt of miraculous powers from the evil entity. For this special case, Dr. Occult donned a magic sword and a battle costume with a cloak and a chest emblem, hence becoming the first costumed hero of the Golden Age. With combined forces, Doc, Zator and the Seven succeeded to defeat Koth for many years forward.

In the early 1940s, Doctor Occult joined the wartime hero-team known as the All-Star Squadron, as one of their few plainclothes members. He remained an All-Star, although mostly a semi-active one, until the war ended in 1945. With the Squadron, he encountered many other great mystics of the era, like Doctor Fate, Zatara, Sargon the Sorcerer, Johnny Thunder and his Thunderbolt, the Flying Fox, Merlin the Magician, Tor the Magic Master, and the almost almighty Spectre.

In 1945, Doctor Occult assisted the Justice Society of America in defeating the interdimensional soulless entity known as the Stalker, sacrificing his own soul to do so. Following Stalker's defeat, Rose appeared before Doctor Occult and shared her soul with him. Since that day, Doc and Rose have remained one physical being, sometimes walking around as a man, sometimes as a woman. (Note: Dr. Occult once told Superman another version of this story and claimed that he had shared his body with Rose when she had been fatally wounded by the cult leader Hroth. However, this should probably be regarded as apocryphal.)

Between the late 1940s and recent years, few recordings of his exploits have been made, but about ten years ago, Dr. Occult started to show up more frequently again. Not appearing to have aged a day since the 1930s, he fought the demon Thahn together with Superman during the latter’s first year as a super-hero. A few years later he offered his assistance during the world-shattering event known as the Crisis on Infinite Earths, and soon afterwards helped the Swamp Thing, John Constantine, and other mystics to fight the Original Darkness that challenged Heaven.

When the young boy Tim Hunter, destined to become the world's greatest sorcerer, was to be introduced to magic, the Phantom Stranger enlisted the help of Occult, John Constantine and Mister E. Constantine quickly dubbed this group of mystic know-it-alls "the Trenchcoat Brigade", due to their common taste in clothing. In this adventure, Occult (and Rose, variously) showed Tim the land of Faerie, almost losing the boy to Baba-Yaga, and even to Queen Titania. It was Occult who transformed Tim's yo-yo into the pet owl Yo-Yo that Tim grew so fond of.

Shortly thereafter, Doctor Occult returned to his supernatural detective business. One day, Rose was no longer in the body or mind of his. This led to an identity crisis, as well as a sexual crisis, for the both of them, until they realized Koth was behind the temptation of them. After deciding they needed their continued co-existence, they managed to defeat Koth, and then fused once again.

Since then, Doctor Occult has become uncharacteristically involved with several other teams. Briefly, he was a member of the inner circle of the Conclave, an organization consisting of virtually every mystic on Earth. He quit the organization just before it was taken over by the corrupt Amethyst. He also re-joined with the rest of the Trenchcoat Brigade to prevent the apocalypse at the hands (tentacles) of M'nagalah. Still later, Occult played a big part during the so-called Day of Judgment, and joined the group of mystics known as the Sentinels of Magic. Lately, he has been active with the Sentinels as well as with the JSA Reserves.

Always ready to battle evil and black magic when needed, it must be said that Doctor Occult is a true hero, intent on doing good. He is a man of few friends. However, the super-hero S.T.R.I.P.E. once described him as "the only mystic I’ve ever felt comfortable having a beer with". Among Occult’s (and Rose's) closest associates are their female office assistant, Marly, Zator of the Seven, and the Phantom Stranger, a being that normally makes few friends. The Doctor is an enigmatic person, and can sometimes use a pretty rough and rude jargon towards people, sometimes even appearing cynical and chauvinistic. However, he has also proven to be a caring and gentle soul. The Doctor's and Rose's deepest regret is that they are mutually in love with each other, destined never to meet but in their dreams.