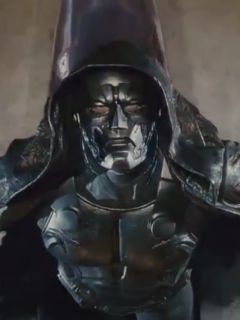 Victor von Doom, also known as Doctor Doom, was the owner of Von Doom Industries and the enemy of the Fantastic Four.

Victor is a billionaire industrialist, an old college rival of Reed Richards and suitor of Reed's ex-girlfriend Susan. In addition to funding Richards' trip to space, he also accompanies the future Fantastic Four on the ship.

Doctor Doom receives superpowers in the same accident that creates the Fantastic Four. Here, he is endowed with two abilities by the cosmic rays - exposure to the rays imbues him with electric manipulation, which, similar to his technologically-derived power from the comics, allows him to project bolts of superheated energy, the only difference being that it is derived from the accident in space and most his body being covered (or possibly completely trasmutated) into an organic metal alloy.

Doom is fully encased in high tech armor of his own design to hide the many horrible scars that he incurred in a lab accident. Using a mixture of science and sorcery, Doom has come close to world domination several times, being thwarted only by the Fantastic Four or his own ego.

However, this process deforms his face, so Doom angrily dons his familiar mask to hide his face (which is portrayed as a mask given to him by the people of Latveria as shown on a plaque on display in his office/boardroom). In the climax, Doctor Doom's metal body is super-heated and then immediately cooled with water from a fire hydrant, which turns him into an immobile statue. He is later transported back to Latveria via a cargo ship.

Doctor Doom is in a coffin, still solidified after his fiery defeat. After the Silver Surfer flies by on a quick patrol around the Earth, disrupting the energy waves all around him, it inadvertently awakens him. After removing his mask and killing a welder that was trying to separate his face from his body, he hides his horribly scarred face behind a dark green cloaked hood. He begins to study the Silver Surfer in an attempt to steal the extra-terrestrial's vast array of cosmic power. During an encounter with the Surfer, Doctor Doom is hit by one of the Silver Surfer's cosmic bolts and his scarred visage disappears and his previous face is restored, although he retains his electricity-based powers.

He filmed the encounter and goes to the United States military, under the leadership of General Hager with a plan to stop the Surfer's destruction of the Earth. He discovers that the Surfer's power comes from his board. After teaming with the military and the Fantastic Four, they subdue the Surfer with an energy device that separates the silvery menace from his board and capture his board. The five of them accompany General Hager to a Siberian military base. The Fantastic Four are held captive and Doom receives permission to study the cosmic surfboard that is the source for the Surfer's power under Hager's strict supervision. He knocks out all the guards guarding the board and kills General Hager by obliterating him.

He dons a new mask and full-on body armor, along with a dark green leather cloak. Using a tachyon-pulse wrist device that he designed while in Reed Richard's lab, he attaches himself to the surfboard and goes on a rampage throughout the Earth. During a chase with the Four in their new Fantasticar, Reed attempts to tell Doctor Doom that the board is drawing Galactus to Earth and he must get rid of it, but Doctor Doom either disbelieves Reed or simply doesn't care, as he simply says "I've never been the giving type". After the team crash-land in China, Doctor Doom attempts to kill the Silver Surfer, but Susan steps in with her force shield. Doom throws a spear made from cosmic energy that goes right through the shield and into Sue, killing her, although she is later revived by the Silver Surfer.

Out of options, Reed and Ben, along with Sue, transfer their powers to Johnny who goes to face the cosmically charged Doctor Doom head on with nearly unlimited power; no one of the Four can get close enough to Doctor Doom to stop him, but all of them combined could have a chance. Using Sue's invisibility and his flight powers to get in close to Doctor Doom, as well as the Thing's strength and Mr. Fantastic's flexibility to hold him down, Human Torch swiftly defeats Dr Doom after destroying his tachyon-pulse wrist device (separating him from the surfboard), who is then bashed into the Shanghai River by a human Ben Grimm, who has taken control of a crane. Doctor Doom sank to the seabed, his ultimate fate unknown.

Doctor Doom's appearance is clad in body armor with mystical figures carved into the pieces, and his chest armor has a giant dragon carved into it. He also replaced his cloth green trenchcoat that he lost in the first film with a much darker green leather cape. After taking the Silver Surfer's board, his steel-colored armor turns silver, which seems to be an effect of the board. His powers haven't differed very much from the first chapter as he retains his electric powers, other than the fact that when he acquires the Silver Surfer's cosmically charged board, he has near limitless power (a deleted scene shows that he has also retained his metal body under his skin). Another change to note that makes the character more in line with the comics is in the manner he refers to Reed Richards; while previously referred to as Reed, at the climax of the movie he calls him by his last name, much like his comic counterpart.
Superhero Class