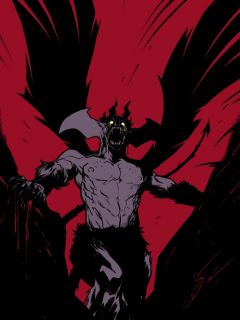 Prior to becoming Devilman, Akira had some of the best grades in his classes and had impressive intellect, partly due to the fact that he spent most time reading.

In terms of physical skills, Akira had a very weak physique and would often show poor performance. After his first transformation into his Devilman, he became much more physically powerful; having greater strength, speed, reflexes, and combat skills, being able to take on Zann's demon spiders without needing to transform. His physical parameters are increased several times fold compared to a normal human with enough physical resistance to take a flurry of powerful hits and was able to continue fighting even after he lost an arm and had his stomach slashed open by Sirene. His ferocious strength allows him to lift heavy objects, tear demons apart with his bare hands, breakthrough barriers, and leap over buildings effortlessly.

When Devilman grows his wings he is able to fly.

He is able to release electric charges on enemies once he comes into contact with him or her.

He can shoot beams from the antenna on his forehead. He can also release energy from his antenna but in a less focused way than his normal Devil Beam. Devilman was also shown using his antennae to create signals similar to those used by Sirene to control her fireable arms and used this technique to direct the arm into Sirene's stomach.

As a Devilman, Akira isn't technically alive and as long as he retains his own will that exists in Hell, Akira exists independently from normal life or death. As an idea, as long as the idea that is "Amon", still exists, he cannot truly die. Akira's also recovered after God erased the existence of all life on earth, recreating the world of genesis in the process

He has the ability to teleport as shown when he rescued Miko. When Miki's parents are killed, Devilman breathed flames from his mouth on the killers with enough heat and force to turn them to ash. Another less-seen ability is his power to phase through solid objects even through inches of hard steel. He is able to grow to a great size which gives him an advantage when fighting smaller demons.

Akira can possess objects like other Devilmen, most notably the Devilman Ghost costume made by Jun He is also able to combine with living tissue, this is never used in the manga, but it was used at the end of the novel version to combine with the other Devilman Corps to assume a larger version of himself. Devilman vs Getter Robo took this a step further by combining with the Getter Robo itself. For a limited amount of time, Devilman can leave Hell and interact with the physical world, but his actions are very limited without a physical body.

In the Devilman Lady manga, after spending a long time in Hell, Akira's powers have heightened to extremes that rival even Satan's. Devilman can also release energy at an opponent through heightened psychic abilities and fight through said objects with impressive strength and psychic power that can effortlessly tear through enemies.